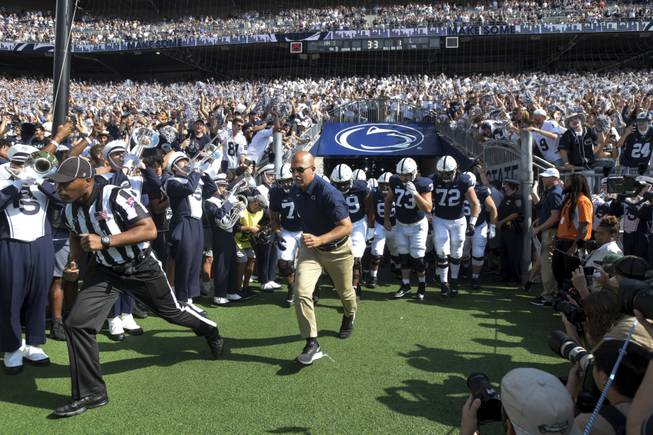 College football by the odds: Vegas preview and picks of every Week 3 game

Bet football for a full season and there’s always going to be a week or two where everything seems to break against you, where unlucky results in some games combine with bad handicapping in others to spell disaster. It’s unavoidable, but it just hurts a little worse when it comes so early in the year.

Week 2 was ruinous for the college football by the odds column, at least from a plays perspective. I went just 3-7 on plays, wiping out a positive Week 1 and then some.

This is when you turn to platitudes like “it’s a long season” and “trust the process” for comfort. From a macro view, things weren’t all that bad anyway.

I’ll try to match the quality with the results.

Read below for picks on every Week 3 game, with write-ups on the biggest contests and some of the strongest positions. Lines are the best currently available in Las Vegas on the chosen side. Picks are labeled in three separate confidence categories — plays, leans and guesses.

Nebraska +22.5 at Oklahoma, over/under: 62.5. If Nebraska didn’t make a horrendous mistake that led to a season-opening loss against Illinois — a fumble returned for a touchdown right before halftime — then there would be chatter that it’s much improved in coach Scott Frost’s fourth season. The Cornhuskers have posted an impressive net 2.1 yards per play in their two Football Bowl Subdivision games, against Buffalo and Illinois. That’s a full yard better than Oklahoma managed against Tulane. Three touchdowns is a fair price for this game. If a spread of 24 or higher becomes better, taking the points might be unavoidable. Lean: Nebraska +22.5.

Cincinnati -3.5 at Indiana, over/under: 50.5. Bearcats’ games might have to get added to a do-not-bet list this season. Dating back to last year during their undefeated regular-season run, their spreads always look inflated and yet they usually cover anyway. That’s a credit in part to a great coach/quarterback combination in Luke Fickell and Desmond Ridder, but Indiana has one of its own in Tom Allen and Michael Penix. My number is Cincinnati -3, but Cincinnati usually crushes my numbers. Guess: Indiana +3.5.

Michigan State +6.5 at Miami, over/under: 56.5. Many are viewing Miami’s 25-23 escape over Appalachian State as 7.5-point favorites as its second straight poor performance to start the season, but that’s disrespectful to a tough Mountaineers’ side. Michigan State will be the worst team Miami has played and may seem like a breeze compared to Alabama and Appalachian State. The Hurricanes’ roster is far more explosive and should take advantage of a young Spartans team in a tough spot on the road in humid South Florida. Play: Miami -6.5.

Alabama -16 at Florida, over/under: 58.5. Betting against Alabama is self-sabotage, but so is backing a young team in its first road game in a hostile environment. Florida should have more defensively to challenge Alabama than Miami did in a season-opening 44-13 Crimson Tide win to go with plenty of offensive tricks. The Gators have kept things remarkably vanilla in blowing out Florida Atlantic and South Florida by more than three touchdowns apiece to start the season. Florida coach Dan Mullen will open up the full playbook here. Alabama -14 is a fair price, and the further the number gets away from that, the more tempting Florida becomes. Lean: Florida +16.

Auburn +6.5 at Penn State, over/under: 53. The Tigers outgained their first two opponents by a total of more than 1,150 yards and 6.5 yards per play. Sure, it was Alabama State and Akron but those are beatings worth taking notice of regardless of the opposition. And yet stock still seems to be down on Auburn for no apparent reason. From a roster perspective, this is an evenly-matched fight. Play: Auburn +6.5.

Arizona State -3.5 at BYU, over/under: 51.5. Arizona State has done nothing but dismantle its first two opponents, and yet this point spread dipped as low as -2 after sitting at -6 over the summer. BYU could pose some problems defensively, as they’ve similarly shut down a pair of opponents to start the season in Arizona and Utah, but bettors seem to have lost sight of just how much talent is on the Arizona State roster. Lean: Arizona State -3.5.

Purdue +7 at Notre Dame, over/under: 58.5. Perhaps “big” play isn’t the right verbiage for this particular selection, but it’s hard to justify this number not being more than a touchdown. People are down on Notre Dame but it’s faced a relative murderer’s row of Toledo and Florida State (yes, despite the loss to Jacksonville State) in comparison to Purdue’s cakewalk of wins over Oregon State and UConn. Play: Notre Dame -7.

Florida State +5.5 at Wake Forest, over/under: 61.5. I’m all-in on buying low on the Seminoles this week. The aforementioned last-second loss to Jacksonville State is inexcusable, but not unbelievable as the Gamecocks routinely give Football Bowl Subdivision opponents trouble. It’s giving us a couple points of value here, as Florida State is No. 52 in Football Outsiders F/+ ratings next to Wake Forest at No. 53. Neither team should be favored by more than three points. Play: Florida State +5.5.

Arkansas State +16.5 at Washington, over/under: 57.5. This is taking the “buy low” strategy to an extreme. The Huskies have probably been the most disappointing team in the nation, but there’s nothing that can fix broken offense like facing Arkansas State. The Red Wolves had the worst pass defense in the nation a year ago, and are coming off of giving up 9.2 yards per play in a 55-50 loss to Memphis. Play: Washington -16.5.

Charlotte +3.5 at Georgia State, over/under: 63. Georgia State is not nearly as bad as blowout losses to Army and North Carolina to start the season imply. The Panthers are virtually the same team that got hot at the end of last season and reached a bowl behind quarterback Cornelius Brown. On the other hand, Charlotte has started 2-0 including an outright upset of Duke but the market has overreacted to pull this spread too far away from a touchdown. Play: Georgia State -3.5.

Virginia +8.5 at North Carolina, over/under: 66.5. The Cavaliers’ stifled Illinois’ offense in a 42-14 victory last week, but there’s a big difference between playing against Illini quarterback Artur Sitkowski and Tar Heel quarterback Sam Howell. North Carolina’s junior one-time Heisman hopeful struggled to find a rhythm with his new receiving corps in a season-opening loss to Virginia Tech, but started to figure it out in a 59-17 walloping of Georgia State last week. Play: North Carolina -8.5.