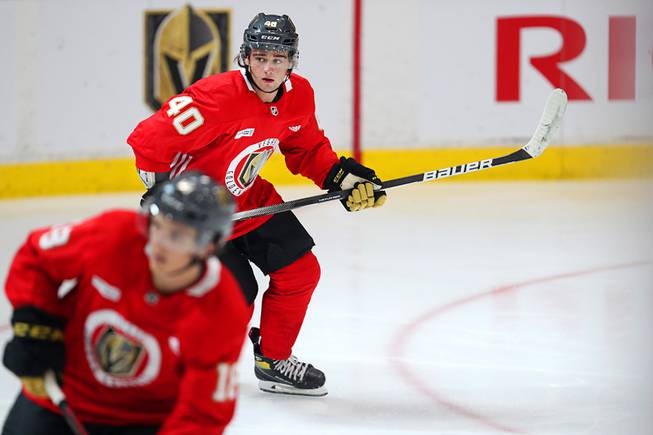 Manny Viveiros chuckled in that unmistakable way coaches do, suggesting his next comment about Golden Knights rookie defenseman Lukas Cormier would be an understatement.

“He’s a pretty good player,” Viveiros said. “He’s got a good future ahead.”

Cormier has been in Las Vegas less than a week, but he’s already making an impression on Viveiros, the Silver Knights coach running the Golden Knights rookie camp this week. Cormier, a third-round draft pick in 2020, dominated his junior league last year and, at 19, is turning into one of the team’s best prospects.

He’ll get more chances to make an impression this weekend, when he and the rest of the Vegas rookies head to Arizona for a showcase tournament, which begins against the Coyotes rookies at 7:30 p.m. Friday.

“It’s fun to get on the ice and finally experience it,” Cormier said. “It was cool — a little nerve-wracking at the start for a couple of drills, but it was good.”

Cormier was drafted during the height of the pandemic last year, so despite being a Golden Knights prospect for nearly a year, he had not visited Las Vegas before he arrived on Tuesday.

Post-draft development camp and preseason training camp were scrapped from last year’s NHL calendar, so Cormier went back to the Charlottetown Islanders of the Quebec Major Junior Hockey League.

And what a year he had.

He led all defensemen with 54 points and finished fourth in the league overall. The three players ahead of him were teammates, as Charlottetown went 35-5 and coasted to the best record in the league.

His hot season helped earn Cormier, a New Brunswick, Canada, native, an invite to Canada’s World Junior camp as one of the youngest players on the roster.

He was among the last cuts but will garner strong consideration again this year.

“He’s a great kid, great skater. He’s a smaller guy, but it doesn’t show on the ice,” forward Peyton Krebs, who also attended Canada’s World Junior camp, said of his 5-foot-10 teammate. “Coming from when we did play there at World Junior camp to now, he’s improved a lot and that’s exciting to see.”

This rookie camp is the first for several of the 25 players who took the ice today. Some are new to the organization and others didn’t get a chance to participate last season because of the pandemic.

Krebs, for instance, was drafted two years ago. But an injury around his draft, coupled with last year’s cancellation, means the top prospect is taking part in his first camp with the Golden Knights.

The experience is valuable for everyone, whether it’s the older players looking to impress the NHL bosses or the younger ones getting a step up in competition before returning to their respective junior leagues for the season.

They practiced against each other today, then will play Arizona Friday, against San Jose on Sunday and against Los Angeles on Monday.

Different prospects are in different stages of their development. Krebs is competing for a spot on the NHL roster.

Diliberatore is looking to impress Viveiros and earn a regular spot with the Silver Knights.

Cormier is heading back to the Quebec Major Junior Hockey League for his last year of junior eligibility.

They’re all hoping to reach the NHL eventually, and this camp is the only time this year they’ll be competing against their organizational teammates under the eye of the Golden Knights brass.

“A lot of times the most important teaching is done not by the coaching staff, but it’s done by the environment itself,” Viveiros said. “It’s so invaluable.”