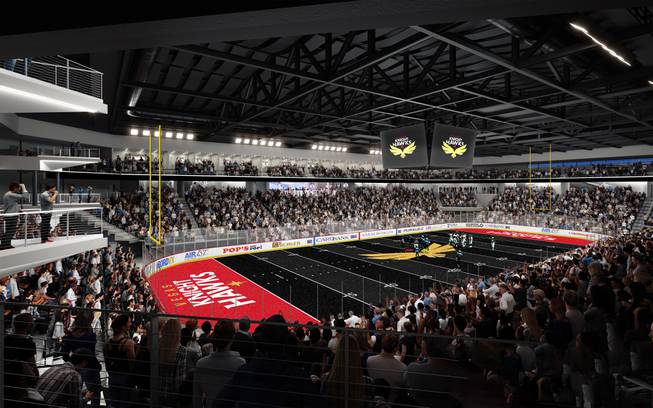 The incoming Vegas Knight Hawks of the Indoor Football League are owned by a group that also owns multiple professional hockey teams, so it should be no surprise that they went to Canada to find their head coach.

Mike Davis has found plenty of success in the Canadian Football League, but he’s also a seasoned veteran of the IFL who has waited for the head-coaching opportunity he just landed with Henderson’s newest sports franchise.

There’s a lot of work to be done before Davis leads his team onto the field at Dollar Loan Center for the first time in April 2022, so we sat down and talked to him about it.

How did you end up coaching an Indoor Football League team in Vegas? How did those conversations go?

I was in the CFL, and my old owner told me there was some guys looking around and inquiring about what I was doing, if I would come back and help start a team, because we had pretty good success [with the IFL’s Nebraska Danger]. For me, it starts with ownership. [Ownership partner] Chuck Brennan had reached out to me via text asking me if I had some time, and an hour later, I was on a phone call with him, and it kind of just snowballed. They made it very clear that I was the guy they wanted, and I was excited to learn more about it and take the opportunity.

Before you took this job, what had your experience been in Las Vegas, and what are your thoughts on the Henderson area now that you’re living here?

We’ve vacationed here once or twice a year, every year prior to getting up to Canada, and I have some friends here and know some trainers here. The football world is a small, small community. I didn’t know much about Henderson. Obviously, when you visit Vegas normally, you come to the Strip, but my wife and I now have a place in Henderson, and it’s fantastic. It’s a small-but-big city. Everybody’s fantastic. Everything you need is right here.

How do you feel about fitting in as part of another new team in a city that seems to be getting new teams every year?

It’s exciting, because there are tons of options. I’ve been in St. Louis before when it was just the Cardinals and the Rams, and then the Rams left, and it was just the St. Louis Cardinals. This way, you’re not handcuffed. There’s something for every flavor, or for whatever tickles your fancy, so to speak. Obviously, we’re more of an intimate setting for families and kids, and it’s right up in your face. I haven’t gotten a chance to get to a Raiders game yet, but obviously, the facility is fantastic. But it’s huge. It’s not the intimate setting you’re going to see with the Knight Hawks.

What challenges exist with building a brand new club?

The challenges will be getting the right guys. For me, it’s character first, because it is Las Vegas. Everybody just hears, “Oh, I’m going to Las Vegas.” Well, we’re actually 8 miles off the Strip. We’re in Henderson, and it’s a small family-oriented town. So, for me, having the right guys come into the community and immerse themselves in the community is key No. 1 for me.

The second challenge is, everybody has a head start on you. The 2021 season is finishing up right now, and all the teams get to keep their 30-man roster, where we’re starting from scratch and looking for 40 fresh faces to be able to compete for a roster spot and challenge guys who have seasons under their belts on other teams.

How would you describe the IFL to somebody who doesn’t know much about the league?

First thing I will tell you is, it’s entertainment first. Football is football, no matter how you look at it. It’s just a small, intimate setting, where you can literally get to know your local guy from UNLV that played here. In the NFL, it might be, “I saw him, and I really wanted his autograph, but I never got a chance to meet him after the game.” Well, here, you’re going to be able to meet that guy, whether it’s UNLV, UCLA, USC, Washington, Nevada or whatever. This team will be made up of a lot of guys who played all over the West Coast, all over the U.S. and have now made Vegas and Henderson their home.

Lastly, what are your expectations for that first year? People want to see a winner right away. How realistic is that?

I always tell people that an expansion team’s never made the playoffs. So, if we can make the playoffs year one, that would be a huge success. Obviously, I have my own personal goals that I’ll keep to myself, but be competitive and win, that would be success for us. Something we can build off of. Right now, year one, we’re laying the foundation, and showing people what this team will be about as far as character and toughness and community, and things of that nature.