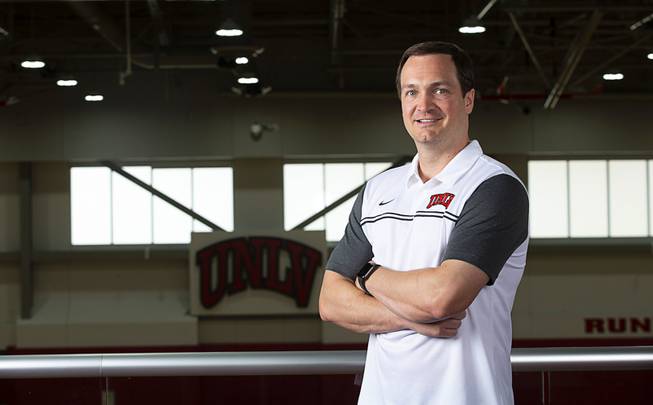 Thursday turned out to be a productive day for UNLV basketball, as the program received a commitment from coveted Class of 2022 forward KyeRon Lindsay.

Lindsay, a 6-foot-8 forward, is a Top 100 recruit. The Texas native averaged 19 points, 11 rebounds and two blocks per game last year as a junior at Guyer High School, and he turned heads at the Nike EYBL Peach Jam in July, posting 19.0 points and 9.8 rebounds per game.

That strong summer performance has propelled Lindsay to being ranked No. 88 in the Class of 2022 by 247Sports. He chose UNLV over Georgia, Oklahoma State and Tennessee.

Lindsay is the first high schooler to commit to UNLV since Kevin Kruger was named head coach in March.

A quick look at what Lindsay’s commitment means for the program:

UNLV brought in 10 newcomers in Kevin Kruger’s first offseason as head coach, and only one of them was a high schooler — combo guard Keshon Gilbert. And technically, Kruger’s staff didn’t land Gilbert; he committed to T.J. Otzelberger and then Kruger’s crew was able to retain him after the coaching change.

Does this commitment change anything we thought we knew about Kruger’s approach to team building? Probably not. He is going to continue to rely heavily on the transfer portal, but Kruger has always been open to top-level recruits (he is still going after 4-star guard Milos Uzan, for instance).

Kruger will pursue Top 100-caliber prospects like Lindsay when the opportunity presents itself and the coaching staff feels it can develop a real relationship with the player. But this roster is going to remain reliant on the transfer portal going forward.

One of the big losses of the offseason was Arthur Kaluma, a 4-star 2021 swing forward who de-committed from UNLV after the coaching change and ended up at Creighton. While not a direct replacement, Lindsay’s commitment helps ease the sting from the Kaluma situation.

At 6-foot-8, Kaluma projected to be a high-scoring combo forward for the scarlet and gray; Lindsay is 6-foot-7, and while he’s not regarded as Kaluma’s equal when it comes to polished scoring ability, the potential is there.

UNLV will have to wait an extra year, but Lindsay fills that Kaluma-sized hole on the roster.

As mentioned above, UNLV probably isn’t going to be adding a ton of prep players under Kruger. So where does this development leave Joshua Jefferson?

Jefferson, a 6-foot-7 forward at Liberty, has been one of UNLV’s top recruiting priorities since the coaching change, but now the program has just taken a commitment from another player at his position in the same class. With Kruger’s focus on the transfer portal, is there room in the 2022 class for two seemingly redundant high school forwards?

Perhaps UNLV views Jefferson and Lindsay as having different enough skill sets to justify two roster spots (if Jefferson were to commit to UNLV). If the scouting reports are too similar, however, we might see the staff back off Jefferson. It’s a situation to monitor as we head into signing season.