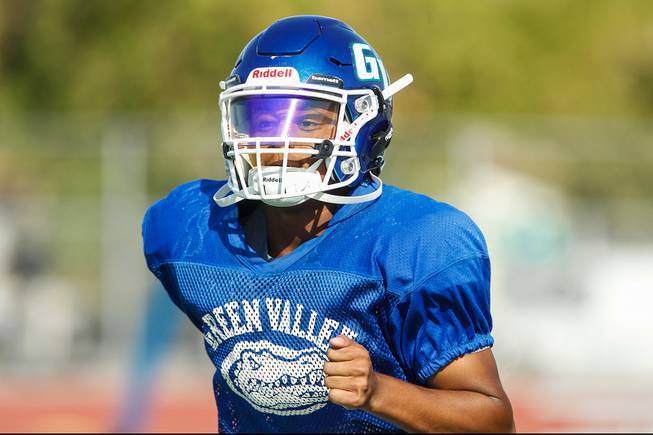 Tory Glasper has a vision of how the postgame celebration will feel: After his Green Valley High School football team beats Basic in the annual Henderson Bowl, Glasper will pose for a photo with his dad, Jamar, and the trophy.

It’s the same trophy Jamar Glasper won as a Green Valley safety in the mid-1990s before playing at Utah State.

The Henderson Bowl was created in 1991 when Green Valley opened as Henderson’s second high school. The rivalry, after not being played in 2020 because of the pandemic, returns at 6 p.m. Friday at Green Valley.

Basic coach Jeff Cahill played in the first rivalry game in 1991 — a Basic win — and five coaches on his staff are former players. Every year the Wolves’ roster has players whose fathers competed in the program, and those players have classmates whose parents were classmates with their parents. Even the school’s principal, Gerald Bustamante, is a graduate.

At Green Valley, the Glasper family, which also includes freshman receiver Trey, is believed to be first legacy family in the program. Mom, Jennifer, is also a graduate and former Gators track athlete.

Green Valley quarterback Garrett Castro is shown with the Henderson Bowl trophy after the Gators defeated Basic on Friday, Nov. 1, 2019.

They might not be the last — the school, after all, has been around for three decades and has a distinct community feel similar to Basic, with massive support from nearby businesses and families.

Jarius Howard, who is also on the Green Valley freshman team, is another legacy. His father, also named Jarius, rushed for 254 yards and four touchdowns against Basic in a 2004 win.

“It’s a great deal to be a kid in high school and go back and look at the scores on the Henderson Bowl trophy, and say, ‘That’s my dad’s year,’” said Green Valley coach Brian Castro, who has been at the school since 2003 and coached both of his sons in the program.

The Henderson Bowl trophy will sit on a table behind the end zone during the game, giving players a friendly reminder of what’s at stake. Green Valley has won the past three meetings, including 42-0 in 2019, and holds a 19-10 edge in the all-time series.

Green Valley went to the state championship game in 1996 and dominated the series in its initial years. But once Basic became competitive in the 2000s, the series reached new heights because players on both teams equally desired to win the game. It’s arguably the most competitive — and meaningful — rivalry game in all of Nevada.

“It’s the game we all grew up wanting to play in,” Tory Glasper said.

Arbor View won on a successful 2-point conversion attempt late in its game with Desert Pines. Faith Lutheran lost when its 2-point conversion try failed in overtime. And, Gorman made national headlines by blowing a 17-point lead in the final 57 seconds at Hamilton of Arizona. We discuss that and look ahead to the state of league play on another edition of Prep Sports Now.

When Jamar Glasper’s playing days ended, he returned to the Green Valley area to raise his family. He was Tory’s first coach.

At an early age, son started to learn of his father’s legend. Jamar was the Sunrise Division Defensive Player of the Year as a senior in 1997 and helped the Gators reach the zone semifinals.

Behind Jon Denton and Wade Perkins from the state championship game team, and NFL players Tyrell Crosby and Brandyn Dombroski, Glasper is right up there as one of the program’s all-time greats. He also lettered four times in basketball.

“(My dad) has given me some good tips and tricks about how to beat a defense,” said Tory Glasper, who in his first varsity season has seven catches for 67 yards through three games. “It’s about making (those tips) come to life because I am trying to carry on his legacy.”

With the game shelved last season because of the pandemic, both schools agree that they are happy just to have a game. “We can’t wait to get over there,” Cahill said.

But for seniors like Glasper, the pandemic created a sense of urgency for this game. They have one — and only one — chance to create lifelong memories in a game they long pictured themselves participating in. For Tory Glasper, that includes a photo with dad many years in the making.

“I just can’t wait for the feeling of the win because I know we are going to win,” he said. “We are going to have to get a photo of the game to show the lineage.”