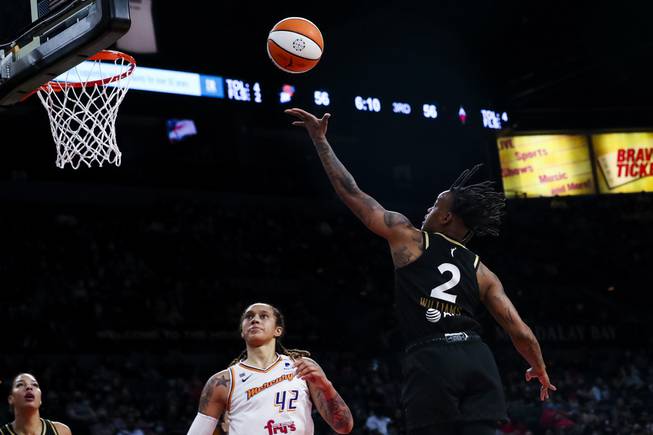 Las Vegas Aces guard Riquna Williams (2) goes for a lay up during game 1 in the semifinals of the WNBA playoffs against the Phoenix Mercury at Michelob Ultra Arena Tuesday, Sep. 28, 2021.

Kelsey Plum scored 20 of her 25 points in the second half, and the Las Vegas Aces beat the Phoenix Mercury 96-90 on Tuesday night in Game 1 of the WNBA semifinals.

Plum, the fourth-year guard who won an Olympic gold medal in 3-on-3 basketball, had 12 points in the third quarter as Las Vegas pushed its lead into double digits.

Riquna Williams scored 24 points for the Aces, who will host Game 2 on Thursday.

Phoenix, which won single-elimination games against the New York Liberty and defending champion Seattle Storm to reach the semis, led 30-21 after the first quarter.

Brittney Griner had 24 points, seven rebounds and six assists for Phoenix. Diana Taurasi, playing in her second game since returning to the lineup after sustaining a sprained ankle, scored 20 points on 6-of-17 shooting.

Williams scored 14 points in the opening 10 minutes to keep it close.