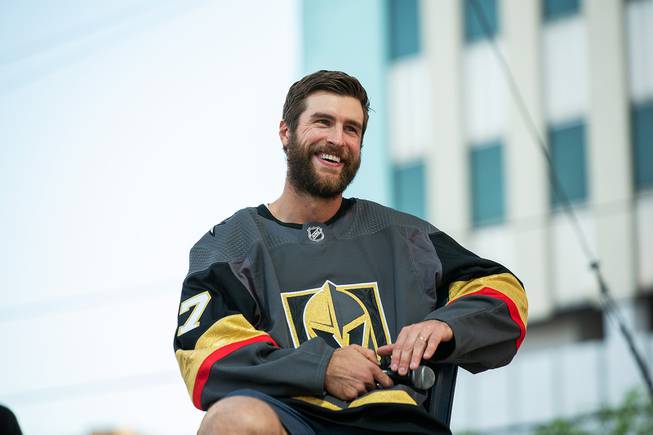 Few will remember a 4-3 comeback win by the Golden Knights against the Colorado Avalanche in a preseason game on Tuesday, though it was a nice template for what a Golden Knights’ third period could look like.

“Up until that point in the game, I think those veteran guys had it in a little bit of cruise control I think and decided they were going to find a way to make sure that we didn’t lose that game,” coach Pete DeBoer said. “I think there was some good stuff that way.”

The Avalanche took a brief 3-2 advantage 6:18 into the third period, but about 90 seconds later Vegas evened the score when Pietrangelo took a William Karlsson feed and slapped it into the net. The winning goal was scored on the power play, as Jonathan Marchessault capitalized from Reilly Smith at the 15:50 mark to give Vegas the victory.

“You never want to lose. Whether it’s preseason or an intrasquad game day one of camp, we’re always trying to win,” said Nicolas Hague, who scored for the Golden Knights late in the first period for a 2-1 advantage. “You’ve got to learn to close out those games. We had a one-goal lead tonight and this is the time to work out the kinks if there are any, and go out and get that winning feeling.”

The remaining preseason games will feature a larger veteran presence. Eight players were cut from Vegas camp after the first preseason game on Sunday, and the Golden Knights could make another round of cuts any day.

This was the chance for players pegged for the minor league Silver Knights to make an impression, because they might not be here long enough for another shot.

A few did just that.

Defensemen Peter DiLiberatore was everywhere, as his five shots wåere a team-high and his 19:55 time on the ice was behind only Pietrangelo and Alec Martinez.

Kaedan Korczak, DiLiberatore’s defensive partner, finished with three shots, three blocks and a pair of hits, and Jake Leschyshyn had a nice play early in the game, hitting the post to set up Patrick Brown’s rebound tap-in at the 2:07 mark of the first period.

“Every league gets faster and faster and for myself I think pace of play was a big emphasis on my summer,” Leschyshyn said. “Just building strength and better confidence with the puck.”

The game also marked the Golden Knights debut of goaltender Laurent Brossoit, who signed a two-year contract with Vegas this offseason. The numbers — 19 saves on 22 shots faced — don’t tell the whole story, as Brossoit was solid.

There were some shaky moments, like the giveaway on his first touch of the game, but he also made some nice saves, conceding a pair of tough-luck screened shots in the second and third periods.

He figures to serve as the chief backup to Robin Lehner, and had success in a similar role in Winnipeg behind 2020 Vezina Trophy winner Connor Hellebuyck. He said after the game it was nice to be back in front of fans (the Canadian division did not have spectators last season) and is looking forward to his future in Vegas.

“I don’t think there was a lot of reasons why I wouldn’t want to be here,” Brossoit said. “The team is a contender, the fan base is great and I’ve heard nothing but great things about the organization. You want to be on a team that can win and even the city itself is pretty incredible. I’d say there’s less reasons not to.”