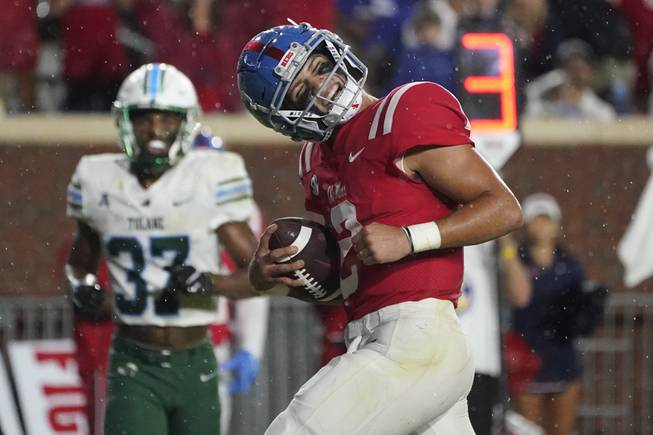 Mississippi quarterback Matt Corral (2) celebrates his touchdown run against Tulane during the first half of an NCAA college football game, Saturday, Sept. 18, 2021, in Oxford, Miss.

Never has perception indicated that the Heisman Trophy is largely down to a two-player race so early. And never have two players with that much separation over the rest of college football gone head-to-head at the same time.

That’s exactly what will happen in Week 5’s biggest game, when Ole Miss travels to Alabama for a 12:30 p.m. kickoff Saturday on CBS. Crimson Tide quarterback Bryce Young reopened as the Heisman favorite at +175 (risking $1 to win $1.75) at William Hill sports books this week with Rebels quarterback Matt Corral only decimal points behind at +180.

The only other player listed at less than 20-to-1 odds (Georgia quarterback J.T. Daniels) hasn’t even played the majority of the season. Depending on what happens Saturday in Tuscaloosa, Ala., one player could be close to Even money less than half the way through the season.

I’m certainly hoping it’s Corral considering I locked him in at 40-to-1 odds to win the Heisman over the summer.

But I shouldn’t get ahead of myself. There are a lot of games to handicap before getting too concerned with futures position, especially this weekend with the largest slate of college football games yet on tap.

Read below for picks on every Week 5 game, with write-ups on the biggest contests and some of the strongest positions. Lines are the best currently available in Las Vegas on the chosen side. Picks are labeled in three separate confidence categories — plays, leans and guesses.

Michigan -1 at Wisconsin, over/under: 43.5. Wisconsin has put on a couple terrible performances, but are the Badgers truly terrible? I still have my doubts. They moved the ball more efficiently than Notre Dame in a 41-13 loss last week, but were undone by five turnovers. That’s unlikely to be repeated. The line on this game was Wisconsin -7 over the summer, and even though Michigan has been impressive, that’s a huge swing. Guess: Wisconsin +1.

Arkansas +19 at Georgia, over/under: 48.5. A total of 48.5 is about as low as possible for a marquee SEC game these days. And it’s totally reasonable here because Arkansas’ defense hasn’t gotten enough credit for pulling the Razorbacks up towards the top of the polls. There’s a big talent gap at play against Georgia, though. The Bulldogs should win easily, but the Razorbacks are unlikely to be completely trampled.  Guess: Arkansas +19.

Cincinnati -2.5 at Notre Dame, over/under: 51. The market sure has stiffened with these big games, as this is my exact line. So, to force a pick, it comes down to whether I prefer the spot advantage for Cincinnati (coming off of a bye) or the home-field edge Notre Dame Stadium brings. I’m leaning ever-so-slightly to the latter. Guess: Notre Dame +2.5.

Ole Miss +15 at Alabama, over/under: 77.5. Speaking of spots, it’s hard to find one that looks better on the surface than what Ole Miss has here. Ole Miss coach Lane Kiffin might already be one of the best bets to scheme trouble for Alabama, and now he’s had nearly a month to prepare. The Rebels have surely had their eye on the Crimson Tide since blowing out Louisville in Week 1. This number should be on the other side of two touchdowns.  Play: Ole Miss +15.

Baylor +4 at Oklahoma State, over/under: 49.5. The Cowboys are undefeated, but they’ve caught a lot of breaks with turnover luck, opponent injuries and more. The Bears have by far the best defense they’ve encountered with a deep pass rush and experienced cornerbacks likely to give inconsistent Cowboys quarterback Spencer Sanders trouble. Play: Baylor +4.

Auburn +3.5 at LSU, over/under: 54.5. This might have been a fair line if LSU was anywhere close to fully healthy, but it is not. The injuries keep piling up for Ed Orgeron’s Tigers and now include a few additional key players like cornerback Derek Stingley Jr. and tackle Cam Wire. Lean: Auburn +3.5.

Arizona State +3.5 at UCLA, over/under: 55.5. This game could quite possibly decide the Pac-12 South division championship, and even though UCLA has gotten more publicity, Arizona State might be the more talented team. The Sun Devils certainly have the more dependable passing game and tougher defense. This game looks more like a pick’em. Play: Arizona State +3.5.

Pittsburgh -3.5 at Georgia Tech, over/under: 59. The Yellow Jackets are coming off of back-to-back taxing games against North Carolina and Clemson, and although they came close to winning both, the Panthers’ offense presents new challenges. Veteran quarterback Kenny Pickett has been electric for Pittsburgh, which had a virtual bye last week in a 77-7 win over New Hampshire. Play: Pittsburgh -3.5.

Troy +7.5 at South Carolina, over/under: 44.5. And now we enter the weekly “Fade the Gamecocks” portion of the column. The Trojans played better than the final score indicated in last week’s 29-16 loss at UL-Monroe, and yet, the result added a couple unnecessary extra points to this number. Play: Troy +7.5

South Florida +20.5 at SMU, over/under: 68.5. South Florida has gotten outgained by at least 3.5 yards per play in every one of its Football Bowl Subdivision games this season. SMU is a sleeping giant that quietly might have a top 10 offense in the nation, one that should make it easy to prolong South Florida’s streak of futility. Play: SMU -20.5.

Indiana +10.5 at Penn State, over/under: 52.5. The Hoosiers keep getting priced with a boost for last year’s dream season. But this is not last year’s team, as Indiana’s continued struggles on offense have made readily apparent. Play: Penn State -10.5