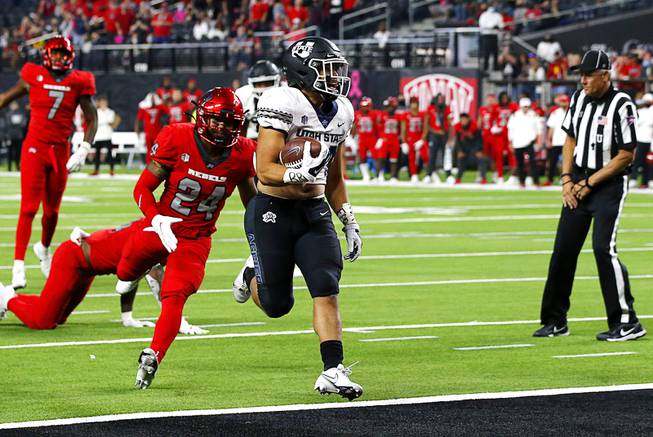 Utah State Aggies running back Elelyon Noa (34) makes it into the end zone for a touchdown with less than a minute left in the fourth quarter of an NCAA football game against the UNLV Rebels at Allegiant Stadium Saturday, Oct. 16, 2021.

Utah State scored a go-ahead touchdown with less than a minute to play, and UNLV’s final desperation drive came up short as the scarlet and gray lost for the 12th straight time, 28-24.

Justin Rogers was in at quarterback in place of an injured Cameron Friel on UNLV’s final drive, and he was sacked on first down with 29 seconds to play. He was sacked again on second down, and his third-down pass was dropped by Steve Jenkins. On fourth down Rogers fired deep over the middle to Kyle Williams, who had the ball ripped from his hands as he went to the turf. The ball deflected up in the air and Utah State secured the interception to end the game.

UNLV had a chance to ice the game, taking over possession with four minutes on the clock after a Utah State missed field goal, but the offense was hampered by the absence of Friel. They opted to run on the first two plays and Utah State was able to load up and stuff Charles Williams for no gain; on third down, third-string QB Justin Rogers threw well short of the line to gain and UNLV punted.

Utah State converted a 4th-and-1 at the 50 with 1:13 on the clock to set up the final sequence. Aggies QB Logan Bonner then hit Derek Wright for 16 yards and 14 yards on consecutive plays to move the ball to the UNLV 11 with 50 seconds remaining. On 2nd-and-10, Elelyon Noa took a draw handoff and slipped into the end zone untouched to give USU the lead with 35 seconds to play.

UNLV is now 0-6 on the season, matching their winless record from the truncated 2020 season. They won’t have much time to dwell on their third consecutive heartbreaking loss, however, as they’ve got a short turnaround before hosting San Jose State on Thursday.

This game has taken yet another crazy turn, as Justin Rogers will try to bring UNLV across the finish line.

Cameron Friel was injured while throwing an interception on UNLV’s last drive, and Utah State drove to the UNLV 24 before setting up for a potential game-tying field goal. The kick was blocked by Tavis Malakius, and UNLV will now take over at its own 24, nursing a 24-21 lead with 4:58 on the clock.

Friel had to be helped off the field, and Rogers is in the huddle with the offense during the timeout. Let’s see if the Week 1 starter can help secure a victory for a UNLV program that desperately needs one.

As has become common for UNLV of late, this game is going down to the wire.

Utah State just missed a 44-yard field goal that would have tied the score, and now UNLV will take over with good field position, a 24-21 lead, and 12:29 left on the clock.

Expect Marcus Arroyo to call Charles Williams’ number a lot down the stretch. The senior running back has carried UNLV today, with a career-high 212 yards and three touchdowns already. If Williams can lead the scarlet and gray on a touchdown drive here, they’ll be in great position to pick up the first win since Arroyo’s hiring in 2019.

UNLV going back and forth with Utah State

This game is swinging again, as Utah State and UNLV have traded touchdowns on the first two possessions of the second half. With 8:18 remaining in the third quarter, UNLV maintains a 24-21 lead.

Utah State received the second-half kick and drove the field rather easily. The key play came on a 3rd-and-16 deep in UNLV territory; the Aggies handed off to Calvin Tyler, and he picked up 18 yards to move the chains. On the next play, Logan Bonner hit Deven Thompkins for a 6-yard touchdown to give Utah State a 21-17 advantage.

Charles Williams took over on UNLV’s ensuing possession, churning out multiple chunk plays before finishing things off with a 6-yard touchdown run. Williams now has 196 yards and three touchdowns, and Utah State doesn’t look like it has the horses to slow him down today.

The action slowed in the second quarter, and UNLV has taken a 17-14 lead into the locker room at halftime.

UNLV failed to score in the second, as their only promising drive was scuttled by penalties as they approached the Utah State red zone. Conversely, Utah State had several good scoring opportunities but managed to shoot itself in the foot multiple times.

One of the biggest plays of the game so far was a 4th-and-2 that USU decided to go for at the UNLV 35. The call was a quick swing pass to the outside, but UNLV linebacker Jacoby Windmon made a clean tackle short of the line to gain to snuff out the drive.

Charles Williams ran wild in the first quarter and finished the half with 139 yards and two touchdowns on 15 carries. Utah State quarterback Logan Bonner made a big mistake by fumbling fourth-down snap on the goal line in the first quarter, but he has recovered since then and has completed 13-of-17 passes for 223 yards and a touchdown.

Utah State will receive the ball to start the second half, so the UNLV defense will be tested right away. How long can they protect this lead?

A big play just broke UNLV’s way, and with 14:57 left in the second quarter the scarlet and gray will have the ball and a 17-7 lead.

The UNLV defense stuffed an Aggies run on 3rd-and-goal from the 1-yard line to close out the first quarter, and after the break Utah State lined up again on fourth down. A fumbled snap threw the play into chaos, and quarterback Logan Bonner had no choice but to fall on the ball.

UNLV now has some serious momentum in the form of a 10-point lead on a day it seems Charles Williams cannot be stopped. Williams already has 112 rushing yards and two touchdowns, and he figures to get a touch or two with UNLV backed up on its own goal line here.

We’re barely halfway through the first quarter and already this game has had everything.

UNLV drove for a field goal on the field’s opening possession, and Utah State immediately responded when Savon Scarver took the ensuing kickoff 100 yards for a touchdown to put the Aggies ahead, 7-3.

After taking a touchback, UNLV responded just as immediately. On the next play from scrimmage, senior tailback Charles Williams took a handoff and weaved downfield untouched for a 75-yard touchdown to make it 10-7 in favor of UNLV.

Utah State then looked to be rolling on its next drive, but cornerback Cameron Oliver stepped in front of a Logan Bonner pass and intercepted it on the sideline; Oliver returned it 45 yards to the Utah State 14. UNLV quarterback Cameron Friel called his own number from there and tried to run it in two plays later, but two Utah State defenders converged and forced a fumble at the 1-yard line. Fortunately, UNLV recovered and Williams punched it in on the next play.

After all that, UNLV has itself a very promising 17-7 lead with 5:45 left in the first quarter. Is this the day the scarlet and gray pick up their first win under Marcus Arroyo?

As expected, it will be freshman Cameron Friel getting the start at quarterback today. UNLV head coach Marcus Arroyo said during the week that sophomore Doug Brumfield (the team’s presumptive No. 1 QB) still isn’t back to 100% health, and when the team took the field at Allegiant Stadium for warmups a few minutes ago it was Friel leading the way. Brumfield does not appear to be active for today’s game against Utah State.

Friel, a true frosh from Hawaii, has had to learn on the job, but he more than acquitted himself in UNLV’s Week 5 loss at UTSA. In that contest, Friel completed 25-of-37 passes for 307 yards, with one touchdown and two interceptions.

The last time we saw the UNLV football team in action, things got a little chaotic at the end of a razor-thin 24-17 loss at UTSA. They’ve since had a bye week to cool off and collect themselves, and the refreshed scarlet and gray will go for their first win on Saturday against Utah State (4 p.m., CBS Sports Network).

Some keys for UNLV:

Quarterbacks on the mend

The bye came at the right time for UNLV, because if they had to play a game last weekend they might not have been able to field a healthy quarterback.

Sophomore Doug Brumfield, freshman Cameron Friel and junior Tate Martell are all dealing with injuries, but the extra seven days allowed Friel and Martell to return to practice this week; Friel is likely to get the start against Utah State.

Brumfield is still injured and was not a full participant at practice, so if something happens to Friel on Saturday—a distinct possibility, considering no UNLV quarterback has made it through an entire game this season—it will be Martell who gets the call in relief.

UNLV can win with Friel, and the players seem to believe that. Against UTSA, the Hawaii native completed 25-of-37 passes for 307 yards (a season high in all three categories for UNLV quarterbacks).

Utah State is coming off back-to-back losses in which its offense managed to score just 23 points combined, but it remains to be seen if UNLV will have as much luck containing the Aggies as Boise State and BYU did.

One battle to watch will be when Utah State hands off. The Aggies are not a great running team (4.1 yards per carry) but they operate at a nearly 50/50 run-pass split. UNLV has looked good containing the run in its last two contests, holding Fresno State and UTSA to a combined 2.9 yards per carry.

If UNLV can effectively make the Utah State offense one-dimensional, it will go a long way to keeping the scarlet and gray in the game.

UNLV lost two veterans this week, one on each side of the ball. Sixth-year senior tight end Gio Fauolo is finished for the season with a knee injury, and senior defensive end Connor Murphy retired from college football due to an accumulation of injuries.

The double-barreled blow is a reminder of how physical and how much of a grind the college season can be, and it’s going to present some issues going forward. UNLV wasn’t the deepest team to begin with, and now the scarlet and gray will have to play the final seven games without a couple of their most experienced players.