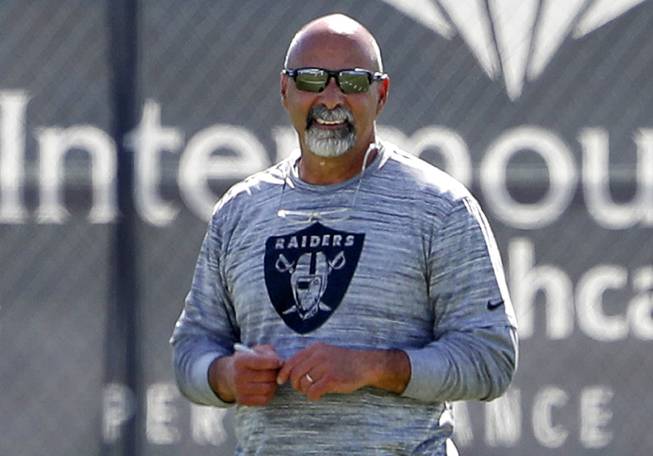 Jon Gruden’s former parking spot in the space closest to the doors at the Raiders’ Henderson headquarters sat empty for three days beginning on Monday night after the coach’s resignation.

But by Friday morning, a beige-colored SUV presumably belonging to new interim coach Rich Bisaccia filled the stall where Gruden’s blue sports car used to rest. The podium where Gruden spoke in the media room was also replaced on Friday with a draped table and chair in its place because Bisaccia prefers to speak while seated.

All indications were that Bisaccia had settled into his new role as week-long preparations for Las Vegas’ game at 1:25 p.m. Sunday against Denver concluded.

“We’ve gone through the meetings to some degree as usual preparation and now we’ll see what the presentation of the preparation looks like,” Bisaccia said Friday. “I think it’s been a good week as far as the football goes.”

Unlike Gruden and many other head coaches around the NFL, Bisaccia is taking more of a CEO approach to the title. In a continued effort to maintain stability, he didn’t meddle at all in the team’s offensive or defensive game plans for the Broncos.

“Gus has the keys on defense and Oly has the keys on offense, and I’m still taking care of special teams with (assistant coach) Byron (Storer)’s help,” Bisaccia said. “So, we are going to drive to work all week in three different cars and we’re going to go to the game in one bus and see what happens that way.”

No players have spoken to the media since Wednesday when a pair of team leaders — quarterback Derek Carr and tight end Darren Waller — expressed their full confidence in Bisaccia.

Nothing has been noticeably different during the open portions of practice the last two days as the Raiders even held their usual Friday dance-off for a few minutes after stretching. Spirits seem high despite a change no one saw coming after the team started the season 3-0 and still sit at 3-2, or one game out of first place as general manager Mike Mayock pointed out.

“(Bisaccia’s) got as much respect in the locker room, our locker room, as any coach I’ve ever seen in my life,” Mayock said. “And the reason he does? Is he a great coach? Hell yeah, but he’s an even better man.”

A clip of Bisaccia from before last week’s game against the Bears garnered a lot of attention from fans on social media this week and helped show his camaraderie with the players. In the video, Bisaccia instructs the running backs to stare down his daughter’s new boyfriend on the sideline.

“I actually apologized to my daughter because I didn’t really get a chance to talk to him much,” Bisaccia said Friday. “I said I was a little bit on edge, and she texted back, ‘That’s OK Dad, I like your edge.’ So, I think I succeeded in doing what I wanted to do. She’s the only one (of four children) not married right now.”

In his second news conference since becoming coach, Bisaccia largely kept the tone light. It felt in stark contrast to the inherent seriousness of Wednesday’s introductory news conference when Bisaccia came with a prepared statement to read.

But that’s not his usual style, and not one he plans to start forcing now. Asked if he had a message ready for his first pregame speech, Bisaccia dismissed the idea.

“I’m more of a at-the-moment type talker maybe you could say,” Bisaccia said. “I have daughters that want to give me things I should say. I prepare for what the topic may be and then I kind of can hit some points that way, but sometimes a player will say something to me on the way into a meeting or earlier in the morning and that will kind of give me cue as to which way I might need to go.”