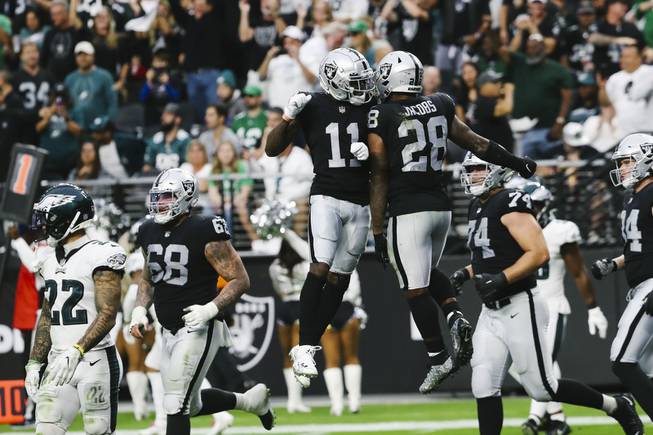 Analysis: Raiders turn in most complete performance in win over Eagles

The Raiders dominated on both sides of the ball in a 33-22 win over the Philadelphia Eagles at Allegiant Stadium on Sunday, moving the team to 2-0 under interim coach Rich Bisaccia.

Here’s a look at how Las Vegas took care of business in improving to 5-2 on the year:

It’s impossible not to notice how much smoother things have been running since Jon Gruden’s departure, as Las Vegas has won its last two games by double figures. It may very well be a coincidence that the team is playing its best without Gruden, but it has been reflected on the scoreboard the past two weeks.

With Bisaccia calling the shots, Las Vegas put on a clinic in complementary football on Sunday. The passing game operated smoothly, with Derek Carr connecting on an absurd 91.2 % of his passes (31-of-34, 323 yards, two touchdowns, one interception). The running game was cranked up no matter who was in the backfield, as the team rushed for 120 yards at 4.3 yards per attempt. And the defense overwhelmed second-year Eagles quarterback Jalen Hurts, chasing him out of the pocket numerous times and forcing a pair of turnovers. Las Vegas even successfully fielded two onside-kick attempts by Philly, which had to please Bisaccia, a longtime special teams coordinator.

It was the best the Raiders have played since arriving in Las Vegas last year.

Despite everything that has happened this season, the Raiders are currently 5-2 and sitting in first place in the AFC West as they head into their bye week. Considering they’re playing through a scandal that had the potential to derail the entire campaign, that counts as quite a development, and credit has to go to Bisaccia for not just holding things together so far, but taking the team’s overall performance to a new level.

It was a bit of a concern when Pro Bowl tight end Darren Waller was ruled out before the game. Waller has become Carr’s favorite target, and his size-and-speed combination is the centerpiece of the Raiders’ offense. What would the team do to game-plan around his absence?

Not all that much, as it turns out. Las Vegas simply plugged No. 2 tight end Foster Moreau into the lineup and ran the offense as usual. Carr continued to target his new top tight end, with Moreau essentially assuming Waller’s share of the offense, and he was productive in that expanded role.

Moreau wasn’t quite the downfield threat Waller is, but he worked the seams and moved the chains reliably, finishing with a team-high 60 receiving yards on six catches. And he even turned in a Waller-esque highlight when he reached back and around the head of Philadelphia safety Marcus Epps to snag a leaping 18-yard touchdown in the first quarter.

Thanks in part to Moreau stepping up, the Raiders got the win and Waller got to take an extra week off to heal heading into the bye. A win-win.

Gruden took a lot of flack for his personnel decisions during his time in Las Vegas, but his two big offseason free-agent signings were huge contributors on Sunday.

On the defensive side of the ball Yannick Ngakoue was everywhere, especially in the decisive first half. In the first 30 minutes of the game the veteran defensive end racked up a tackle for loss, batted down a screen pass on a third down, and recorded a vicious sack of Jalen Hurts.

Gruden’s other big-money signing, Kenyan Drake, also enjoyed his best game of the season. With running back Josh Jacobs exiting in the second quarter due to a chest injury, Drake saw increased snaps and made them count, producing 79 total yards on 17 touches, both season highs. He also found the end zone, swerving across the goal line from four yards out to cap the opening drive of the second half and give Las Vegas a 24-7 lead.

Ngakoue signed for two years, $26 million, while the Raiders gave Drake two years and $11 million. As Las Vegas rolled to its second straight victory on Sunday, they seemed like bargains.