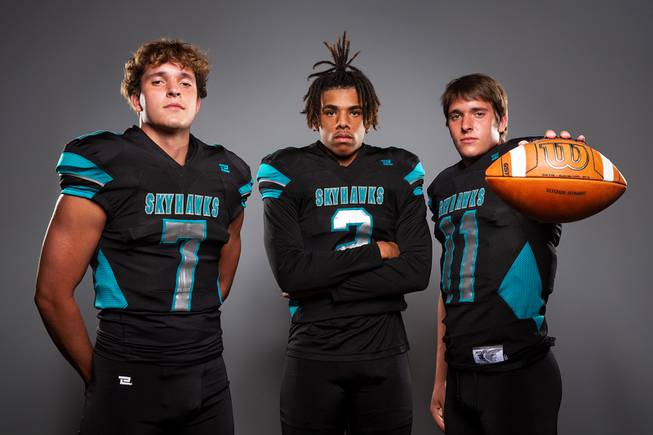 One game away: Silverado beats Coronado to reach state championship

Members of the Silverado High School football team are pictured during the Las Vegas Sun’s high school football media day at the Red Rock Resort on August 3rd, 2021. They include, from left, Bryson Tunnell, Donavyn Pellot and Brandon Tunnell.

The Silverado High School football team made history on Friday in a 42-7 win over Coronado in the class 4A state semifinals.

The win was the Skyhawks’ 11th of the season to establish a program record, putting them in Thursday’s state championship game against Shadow Ridge at Allegiant Stadium. Silverado, which opened in 1994, is playing for its first state title.

Silverado has outscored opponents 567-101, establishing the school record for points scored and surrendered in a season.

Brandon Tunnell had two short touchdown runs for Silverado, which scored the game’s final 35 points. He also connected with Bryson Tunnell for a 10-yard scoring strike.

Ostolaza raves about his team’s athleticism, and that was evident with Jaden Thrower returning two punts to inside the Coronado 10-yard line. Donavyn Pellot, the team’s only two-way starter, added a 2-point conversion and “is the best player in the 4A,” Ostolaza said. “I don’t think you will get any coaches who will disagree with that.”

Demetrius Jones tallied an interception return for a score for Silverado.

Silverado, like many teams playing in the reimagined class 4A, sensed it had a squad that could make a long playoff run. Then in late August they beat Shadow Ridge — a state favorite — 50-29 to confirm they had one of the classification’s top teams.

Now they have to beat Shadow Ridge, and its misdirection rushing attack, again to cap the historic season.

“People will say they are one dimensional,” Ostolaza said of the Shadow Ridge attack that passed just two times in its semifinal win over Las Vegas. “Well, it’s a hard-to-stop one dimension.”