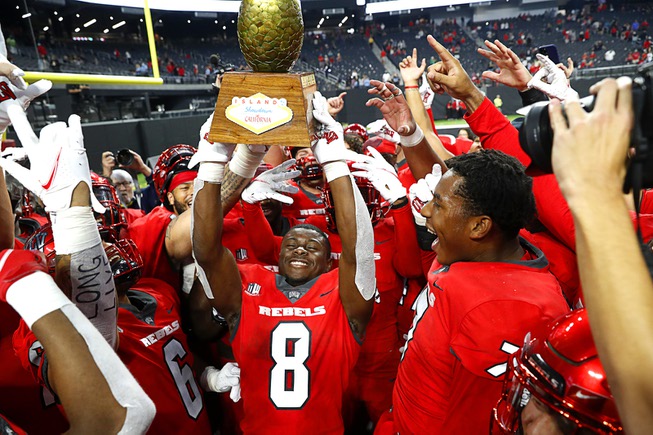 Two in a row: UNLV football wins ugly against Hawaii

After suffering through so many contests this season in which they played well enough to win only to have the rug pulled from under them in the final minutes, Marcus Arroyo’s squad earned the right to weather a mistake-filled first half and find their footing in time to come out on the right side on the scoreboard.

That’s how Saturday’s matinee home matchup against Hawaii played out, with UNLV persevering through one of its sloppiest performances of the year to win its second straight, 27-13 over Hawaii at Allegiant Stadium.

Things started on a very shaky note for the scarlet and gray, as Hawaii took the opening kickoff and tossed a 79-yard touchdown on the first play from scrimmage. Instantly trailing 7-0, UNLV proceeded to commit three turnovers on its first four possessions. That should have been enough to seal their fate, but the defense rebounded after the disastrous first play and kept the damage to a minimum, holding Hawaii to a minuscule 3.2 yards per play over the final 59 minutes and 40 seconds.

For all the things UNLV did wrong against Hawaii—two interceptions, a fumbled snap, getting stuffed on 4th-and-inches on the goal line, allowing the long touchdown on the game’s first snap, etc.—the thing they got right was handing the ball to Charles Williams over and over again. The sixth-year senior logged the most carries of his long and distinguished college career and did major damage, running for 266 yards and three touchdowns on 38 attempts.

Williams’ most important carry came early in the third quarter. The teams went into halftime tied, 10-10, and UNLV received the ball to open the second half. Williams took a handoff and sprinted 64 yards down the right sideline before being tripped up at the Hawaii 22-yard line.

Three plays later Williams cut back through the middle of the field and walked into the end zone from seven yards out to give UNLV a 17-10 lead.

UNLV led 20-13 with four minutes left in the fourth quarter, but a Daniel Gutierrez 56-yard field goal attempt was blocked, leaving the door ajar for Hawaii to mount a game-tying drive. On 4th-and-3 at midfield the Warriors handed to Dedrick Parson, but UNLV linebacker Kyle Beaudry sifted through a mass of bodies and brought him down short of the line to gain.

It was the second straight week Beaudry has come up clutch after forcing two fumbles in last week’s triumph at New Mexico.

The senior Las Vegas native said his fourth-down stop unfolded just the way it does on the practice field.

“When it comes to that fourth-down stop, it’s something we work in practice,” Beaudry said. “Wednesday is short yardage, goal-line, red zone, 4-minute, 2-minute drives. It goes all the way back to camp. It’s just practice. I trusted my eyes and found the hole, made a tackle.”

Williams put it on ice from there. Two plays after the turnover on downs he broke through the left side of the line and galloped 47 yards to the end zone to extend UNLV’s lead to 27-13.

With Saturday’s monster performance Williams has now run for 1,084 yards on the season with 13 touchdowns, and he has padded his school-record career rushing total to 4,024 yards.

“Fine, really,” he said of his physical state. “Honestly. I take care of my body a lot, I’m always in the training room getting treatment so I can be ready for games like this.”

UNLV has now won two straight games, which qualifies as a DiMaggio-esque streak after the program went the previous 23-and-a-half months without a victory. The scarlet and gray are 2-8 on the year and 2-4 in Mountain West play, with a home game against San Diego State set for next week and a finale road trip to Air Force on Nov. 26.

Arroyo said this was a game UNLV might not have won earlier in the season, but now that they’ve tasted victory they have gained a belief in themselves to close out.

“Pitching a shutout from the first play on, 59 minutes of no touchdowns…I thought they did a fantastic job,” Arroyo said. “The thing behind the stat lines that I’m most proud of is the resiliency of this group when things weren’t perfect. We’re turning the ball over, we’re playing ugly—we won ugly.”