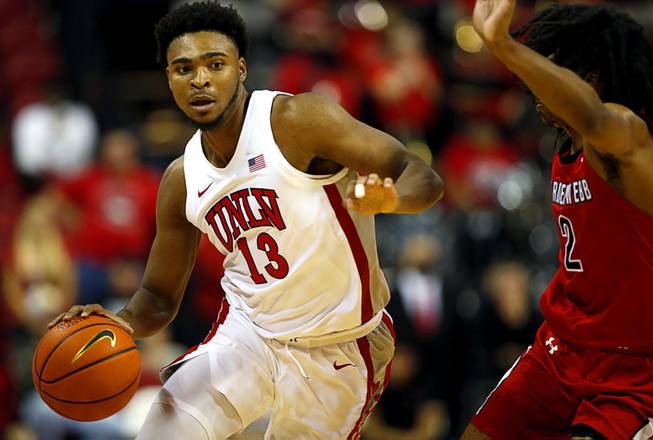 If UNLV finds itself in a tight game with No. 4 Michigan on Friday (9:30 p.m., ESPN2)—say, a one-possession game with five minutes remaining—a lot of things will have gone right for the scarlet and gray over the first 35 minutes to get them there.

As for the final five minutes? Bryce Hamilton has that covered.

UNLV has opened the season 3-0 by winning three close games, and Hamilton has carried the load down the stretch in each of them. Working with an internal timer, the senior wing has upped his production and efficiency while seemingly lowering his heart rate in the final five minutes of back-and-forth contests.

Hamilton is averaging a career-high 17.9 points per game, and almost half his buckets have come in winning time.

In the season opener, Hamilton hit 4-of-5 shots and scored 11 of UNLV’s final 13 points in a victory over Gardner-Webb.

Three days later against Cal, Hamilton made 2-of-5 to notch four of UNLV’s final six points.

On Monday, the lefty canned 4-of-7 field goals in the last five minutes, scoring eight of the team’s final 12 points to hold off North Dakota State.

According to UNLV coach Kevin Kruger, this team was built with the mindset to get the ball to Bryce and let him take over with the game on the line.

“Bryce just has the ability to get his own shot, more so than most guys in the country,” head coach Kevin Kruger said. “He can take and make tough shots.”

That’s why Hamilton is here in the first place. After averaging 17.9 points per game last year and watching his coach leave the program (the second head coach of Hamilton’s college career), the Pasadena native entered his name in the NBA Draft. He went through the pre-draft process but left open the door to return for one more collegiate season—if it made sense.

Kruger made it make sense. After being named head coach, he maintained an offseason dialogue with Hamilton that included a game plan for his senior campaign. Kruger was clear in his vision: Hamilton was going to be the unquestioned No. 1 option on offense. Plays were going to run through him and he was going to be counted on to produce every night.

Kruger reiterated that blueprint after the Gardner-Webb game, leaving no doubt as to whose number he is going to call in crunch time this season.

And when a game is on the line and the clock is ticking down, Hamilton is going to be “The Man.”

Hamilton liked what he heard from Kruger and felt he could thrive in such a pressure-packed role.

“He told me what my role is going to be when I decided to come back here,” Hamilton said, “and I accepted it.”

His teammates have also accepted it.

It’s not always easy to defer, especially when the spotlight is brightest, but the scarlet and gray seem to understand this is Hamilton’s time and that in tight games they are going to succeed or fail based on Hamilton’s ability to close it out.

In other words, everyone knows their roles.

Junior wing Donovan Williams, a transfer from Texas, said Hamilton is one of the five best scorers with whom he has played.

“Being with him in the games, you feel that level of confidence,” Williams said. “When coach says we’re going to run this ball screen with Bryce and Royce [Hamm] because we like that mismatch, you feel confident because you know whoever they put on Bryce coming off the ball screen, they’re at a disadvantage.

“Playing alongside Bryce,” he continued, “it makes our jobs a lot easier.”

Hamilton isn’t satisfied with his early-season success; he knows he is shooting just 28.2% from the field in the first 35 minutes of games (compared to 58.8% in the final five minutes), and he is efforting to increase his early-game efficiency.

But he is relishing his role as the ultimate go-to guy, knowing his coaches and teammates have the utmost faith in him to deliver.

“It feels good,” Hamilton said. “It definitely helps with my confidence. To be able to have my coaches’ and my teammates’ trust, it feels good. I’m thankful to be in that situation.”