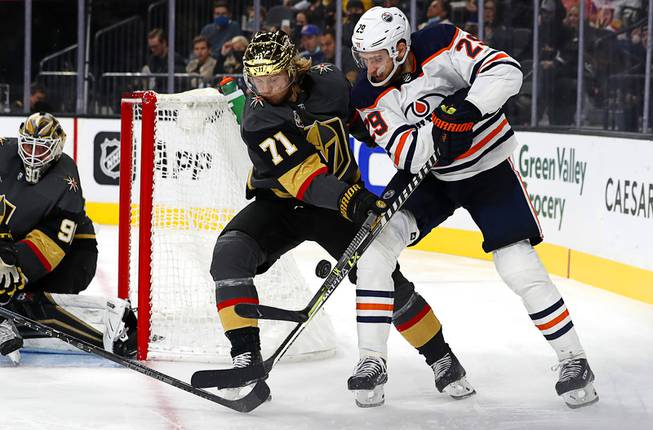 There’s an axiom in the NHL about how important the Thanksgiving holiday is in regard to the playoff race. Teams in a playoff spot on the fourth Thursday in November often turn out to be the ones who make it when the postseason rolls around.

That’s important for the Golden Knights, who feasted on turkey and mashed potatoes sitting in third place in the Pacific Division, with a three-point cushion for a playoff position.

For a team as injured as Vegas has been this season, it’s encouraging to know how they can play when not at full strength.

And as they look forward to a Pacific Division showdown with the Edmonton Oilers tonight, the Golden Knights are not only in a playoff spot but starting to fully power up as players return to the lineup.

“I’m really happy and proud of the group with where we’re at,” Vegas coach Pete DeBoer said. “The league has an ability to bury you in a deep hole if you don’t handle it the right way, and I think our group has handled it the right way.”

The Oilers come to town tonight four points ahead of Vegas, starting a pivotal stretch of games for the Golden Knights. Between now and next weekend, Vegas plays the Oilers, Ducks and Flames, all of whom are in the thick of the divisional race (there’s also a game with the last-place Coyotes, who relocated to the Central Division this year).

Vegas lost to the Oilers in their last meeting a month ago, but the Golden Knights have reinforcements this time. Mark Stone and Max Pacioretty were injured the last time around, and Zach Whitecloud left that game with an injury. All are expected to play tonight, as is Jonathan Marchessault, who missed the last five games in COVID-19 protocol.

“For a long time, it felt like we were losing guys left, right and center,” defenseman Shea Theodore said. “To have some guys come back in, put some energy into our lineup, I think that’s a good sign for our group.”

Pacioretty made his return in Wednesday’s victory against Nashville, registering an assist and five shot attempts. He said Thursday he’s feeling back to normal after missing 17 games with a broken foot.

He reunited with Stone and Chandler Stephenson atop the Golden Knights’ top line, a welcome sight for a team ravaged with injuries. Vegas’ most productive trio had returned, and if the Golden Knights could go 12-8-0 and sit in a playoff spot without them, it’s exciting to think what they can do with them in the remaining 62 games.

“The key now, when we do get everyone back, is not just sit back on our heels and say that we have our lineup and we just deserve wins,” Pacioretty said. “No, we’ve got to keep that same mentality.”

That starts tonight with Edmonton, which started the year 14-5-0 behind two historic starts from Connor McDavid and Leon Draisaitl.

The standings will be in flux all year as teams leap-frog each other, but if the Thanksgiving standings played out to the end as they do more often than you’d think, the Golden Knights would play the Oilers in the first round of the playoffs.

That’s a long way away, and between injuries and fitting Jack Eichel under the cap, who knows what the Golden Knights will look like come playoff time. But the Oilers are a legitimate contender for the Pacific Division, and Saturday’s game could prove to be an important one down the road.

Vegas isn’t fully healthy yet, but with Pacioretty and Stone back in the lineup, they’ll be more dangerous tonight than they were the last time these teams met.

“Hopefully a lot of it is in the rear-view mirror here,” DeBoer said. “We’ll see. We can start to see what our team is really about.”

‘Fearless Freddie’ gets his due: UNLV to retire Banks’ No. 13 jersey in ceremony today