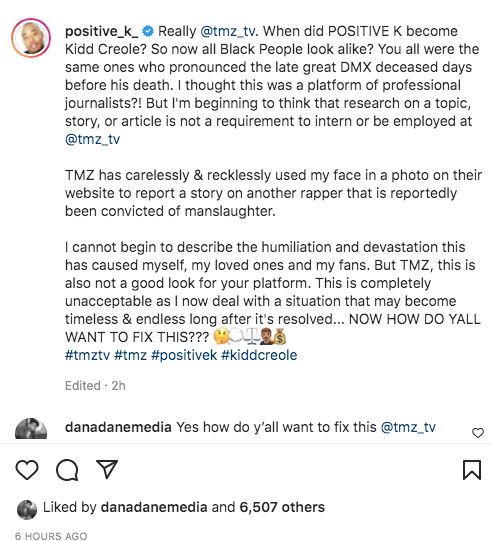 Was this an honest mistake or another case of “all Black people look alike”?

In an article on TMZ that was supposed to inform the public of the outcome of Kidd Creole’s murder case became an embarrassing moment for Positive K, whose picture was mistakenly used instead of The Furious Five member who was convicted of manslaughter in a New York City court this morning.

With the title reading, “THE KIDD CREOLE RAP LEGEND CONVICTED OF MANSLAUGHTER”, TMZ erroneously posted a picture of the “I Got A Man” rapper, who did not think the journalistic blunder should’ve even been able to be posted on a large platform like TMZ.

Many artists and industry insiders commented on Positive’s post, appalled at the ignorance of TMZ’s staff. Hip Hop legendary VJ Ralph McDaniels commented from his @videomusicbox page saying, “Can we have a volunteer to be the fact and photo checker for the outside medis..please?” Producer extraordinaire Pete Rock commented saying, “bro cmon man WTF fa real? i think this is a meme i know TMZ aint do that did they?? 🤦🏾‍♂️ @positive_k_ naw they playin bro lol.” Pete Rock left another comment, saying, “whats crazy is that black folk work up there with those mofos bro smh. They wack for this. Yeah i had to tell them FOH over hev bro @positive_k_“

TMZ eventually fixed the blunder, but it is unclear as to whether or not the media giant has apologized to Positive K.