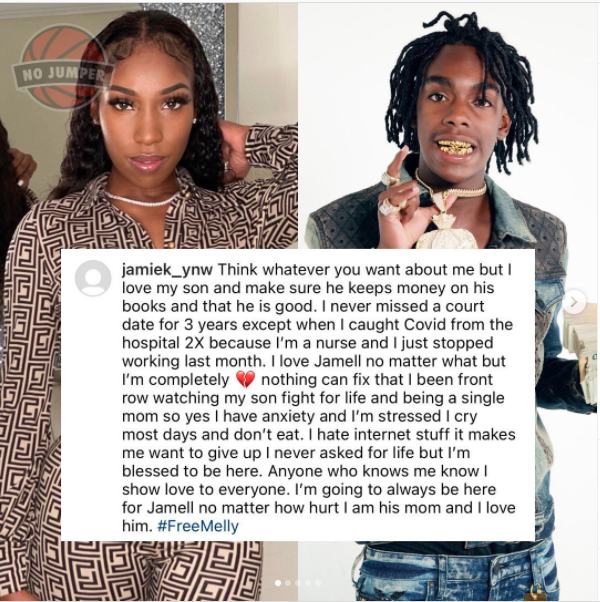 South Florida rapper YNW Melly’s murder trial has began this week, with Melly receiving an overwhelming amount of support from the Hip Hop community despite the fact that he could be facing the death penalty if convicted. After voicing his opinion from behind bars about the support he’s received from his loved ones, Melly’s mom responded on social media sayng she has her son’s back no matter what.

Melly’s Manager, 100K, has been catching criticism from Melly’s mom, who claims that the rap mogul conducted shady business involving both of her sons and Melly was quick to defend his manager/friend’s honor.

“Man listen, everybody who entertaining that s**t or whatever going on, that is not what it is, my mama be lying, my mama got anxiety issues, her a** triggered bruh. She feel some type of way because she thinks my brother is supposed to be bigger,” Melly said.

Jamie Demons-King, Melly’s mother, responded to his claims on IG, stating, “Think whatever you want about me but I love my son and make sure he keeps money on his books and that he is good,” Demons-King said. “I’ve never missed a court date in 3 years except when I caught Covid from the hospital 2X because I’m a nurse and I stopped working last month. I love Jamell no matter what but I’m completely [heartbroken] nothing can fix that I been front row watching my son fight for his life and being a single mom so yes I have anxiety and I’m stressed I cry most days and I don’t eat. I hate internet stuff it makes me want to give up I never asked for life but I’m blessed to be here. Anyone who knows me know I show love to everyone. I’m going to always be here for Jamell no matter how hurt I am his mom and I love him.”

DaBaby Curved by Fan After Trying to Kiss Her