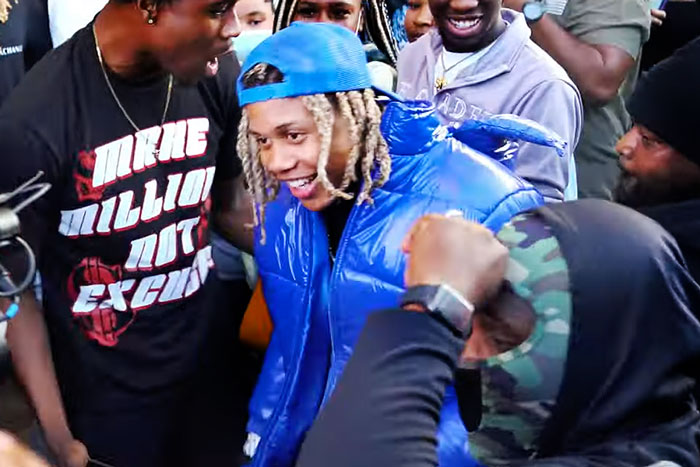 Drake is not the only one with a double.

A Lil Durk look-alike nearly shut down a Florida mall when he showed up. Video footage shows the Durk doppelgänger being swarmed by fans as he is escorted to his car by a team of security. Fans followed the fake Durk through the mall and outside, snapping photos before he was whisked away. It was easy to be fooled as the fake Durk bears a striking resemblance to the real Durk, even down to his tattoos and clothing.

The mall stunt was part of an elaborate prank by internet personality King Cid. However, the Durk look-alike is a social media sensation in his own right with over 150,000 Instagram followers. Known as “Shmurkioo,” he regularly impersonates the Chicago rapper and his flashy lifestyle.

In his various posts, Shmurkioo is seen posing with fans and riding in a Lamborghini. He even has his own version of Durk’s girlfriend, India Love, who regularly makes cameos in his videos.

Durk has seemingly taken a liking to his look-alike. He reposted a video of Shmurkioo soundtracked by his song “A Ni**a’s Heartbeat” and captioned it, “OMG WHAT HAPPEN TO SMURK.”

While Shmurkioo may be imitating Durk’s lifestyle, he can’t duplicate his bank account. The 7220 rapper claims he is now commanding a whopping $500,000 per show.

6ix9ine Announces His Return: ‘The Demon Is Back’