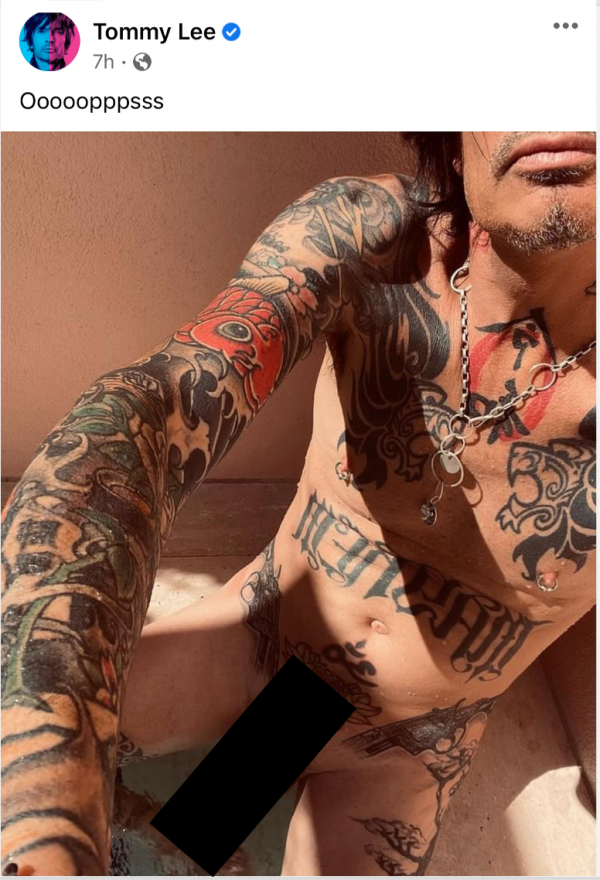 Tommy Lee Shares Picture of his Genitals on Facebook

Rocker Tommy Lee is no stranger to courting attention and on Thursday, he took to social media to do just that in a very big way.

The Mötley Crüe drummer posted a naked picture at approximately 3:52 am EST on Thursday morning to Facebook, Twitter, and Instagram. Taken at a downward angle, it shows Lee naked sitting on a bench in a corner. He captioned the photo simply “Ooooopppsss” without any further explanation. A censored version of the NSFW photo can be seen here.

Even as the shocking photo racked up thousands of comments and shares, it remained active for at least nine hours on Instagram despite what appears to be clear violation standards. (It has since been deleted from the platform although it is unclear if the platform or Lee himself removed the content.)

As of early Friday morning, the photo is still up and active on both Facebook and Twitter. As to be expected, the comments do not disappoint with many making comparisons of the artist’s genitals to that of a drumstick. Shortly after posting the now-infamous photo, Lee shared a (slightly) less racy photo of a man with naked buttocks facing an elephant with a caption “How do you breathe through that little thing?”

Many users have also questioned why there appears to be a double standard for Lee’s content compared to their content that has been removed from the platforms.