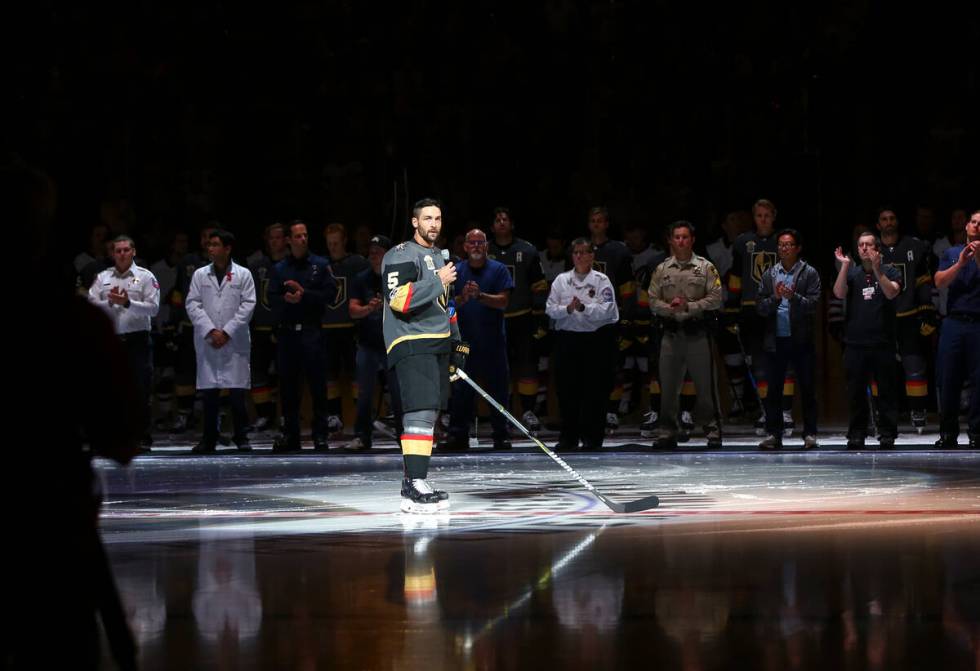 The 71 words the now-retired Golden Knights defenseman said to a grieving community Oct. 10, 2017. Center ice. Packed house. Microphone in hand. All eyes of the announced crowd of 18,191 at T-Mobile Arena on him. Teammate Jon Merill said he could hear a pin drop.

Engelland’s address before the Knights’ first-ever home game was part of a ceremony designed by the team in the wake of tragedy. Nine days earlier, the deadliest mass shooting in U.S. history took place at the Route 91 Harvest festival on the Las Vegas Strip. Sixty people were killed. Hundreds were wounded. More had their lives altered forever.

Engelland, by his own admission, isn’t much of a public speaker. But he was the perfect choice. He was the one Knights player who wasn’t new to Las Vegas. The 58-second speech is one of the defining moments of his career.

“Like all of you, I’m proud to call Las Vegas home,” Engelland said that night. “I met my wife here. Our kids were born here. I know how special this city is. To all the brave first responders that have worked tirelessly and courageously through this whole tragedy, we thank you.

“To the families and friends of the victims, we’ll do everything we can to help you and our city heal.

“We are Vegas Strong.”

That speech and night were a ray of light to many during one of the valley’s darkest hours. It continued through the Knights’ entire magical inaugural season. They became a symbol to rally around.

The Knights’ memories remain vivid five years later. The bond they formed with the community endures.

“It was everything,” said season-ticket holder Corey Nyman, who escaped the mass shooting without physical injury. “It was kind of our therapy and our healing.”

The Knights were still trying to find their place in the valley.

Las Vegas’ first major league professional sports team was a ragtag group assembled by taking players from other teams in the expansion draft. They were learning about the city and the team. Several players were still living in a hotel.

The Knights’ main focus Oct. 1 was their final preseason game at 5 p.m. against the San Jose Sharks at T-Mobile Arena. The fact that they had to play — and do so earlier than usual — later proved crucial.

“If we didn’t have that preseason game that day, lives could have been altered for sure,” right wing Reilly Smith said.

Players split up after the game, but none went to the concert. Engelland, Merrill and goaltender Marc-Andre Fleury went home. Karlsson and left wing Jonathan Marchessault returned to Red Rock Resort, where they were staying. Smith, defenseman Brayden McNabb and a group of other players went to The Cosmopolitan of Las Vegas for a late dinner.

Engelland and his wife, Melissa, had tickets to the festival. They’re fans of country music artist Jason Aldean, who was playing when the shooting started. But Melissa’s family was in town and leaving the next morning, so they didn’t go.

“I don’t know what made us stay at home,” Engelland said.

Players learned what was happening on the Strip at different times. Fleury didn’t know until his former Pittsburgh Penguins goaltending partner Brent Johnson texted him to make sure he was all right. Engelland was woken up by a phone call.

Fleury, who now plays for the Minnesota Wild, was glued to his TV all night.

“I just felt helpless,” he said.

Smith started to see posts on social media during dinner about an active shooter. He saw people running around the casino. Soon after, it was locked down.

Knights president of hockey operations George McPhee, then the team’s general manager, always kept his phone on during the regular season. It comes with the territory of running an NHL team.

That Sunday, with the season about to begin, was one of the few times he turned it off before going to bed.

He didn’t turn it back on until he walked his dog the next morning. His alerts “just would not stop,” he said, as he learned what happened overnight.

There was a message from director of team security Tom Monahan saying all the players were safe and accounted for. The ones at The Cosmopolitan were picked up early Monday morning and driven home. They had to go back for their cars the next day.

“Really eerie feeling (on the Strip),” McNabb said. “You could see the window (the shots came from).”

The Knights had a barbecue at Fleury’s house that night. It was planned as a team bonding activity. It turned into a brainstorming session as players started asking what they could do to help.

Practice was canceled the next day. Knights staff had a different plan for players when they returned to the rink. They would go to blood drives and donate. They would visit with first responders. They would talk to fans and survivors who needed comfort. Everyone except Engelland, who had played for the ECHL’s Las Vegas Wranglers, had just arrived to the city. But they were willing to do whatever asked of them for their new community.

“Our biggest job was to go out there, try to put some smiles on their faces,” said Merrill, who now plays for the Wild. “Lighten the mood a little bit.”

It helped that the Knights had time. Their first regular-season game wasn’t until Friday in Dallas. In the meantime, McPhee and his staff were finalizing the team’s roster. It wasn’t easy, knowing what the valley was going through.

At one point, McPhee, who was the general manager of the Washington Capitals on Sept. 11, 2001, stepped back from his desk and asked: “What the hell just happened here?”

The Knights’ inaugural season began at 5:40 p.m. Pacific Time on Oct. 6, 2017, at Dallas’ American Airlines Center. They were more than 1,000 miles away, but they could feel the eyes of a community on them.

The Knights trailed the Stars 1-0 after two periods. Veteran right wing James Neal scored once in the third period to tie the game. He scored again to win it.

The Knights followed that 2-1 win with another 2-1 victory in overtime against Arizona. They then headed back to Las Vegas for their first regular-season home game, against the Coyotes. Behind the scenes, the team was working to turn a planned celebration into a somber reflection. The rink had to become a place where people could grieve and pay respects.

“Everything had to change,” McPhee said.

The Knights took off all their advertising along the boards in favor of the words “Vegas Strong.” They projected the names of the dead on the ice and held a moment of silence. First responders were introduced along with players. Engelland delivered his speech. He said he was nervous, but he received rave reviews.

“That’s probably the biggest thing that stands out to me is him center ice holding that microphone,” Merrill said. “Everybody was holding on for every word he said.”

Henderson native Justin Daus was watching on TV miles away with other Las Vegans at the University of San Diego. The previous days were filled with shock, isolation. The Knights, and what they did, provided hope.

“We all sat down to watch and cried for the city,” Daus said. “That event the Knights put on was the first time we felt goodness since the shooting happened.”

McPhee was walking to his seat after the ceremony when it hit him.

It was never in doubt. Left wing Tomas Nosek scored 2:31 into the game. Engelland, who had 30 goals in his 671-game NHL career before retiring in 2020, scored less than two minutes later. Neal then scored twice for a 4-0 lead 10:42 into the game.

“It was not about hockey that day,” Marchessault said. “It was more about the first responders and the people that passed away and got wounded.”

The game was special. What happened next was even more so. The Knights, expected to finish near the bottom of the NHL, didn’t stop winning. They started 8-1. They were 26-9-2 by the start of 2018. They wanted to prove that their previous teams were wrong to give them away. They were also “playing for a city,” Engelland said.

The fans noticed. T-Mobile Arena was full every game. Players were recognized when they went to the grocery store. Defenseman Shea Theodore said the connection that was formed “meant everything.”

A brilliant short-handed goal by center William Karlsson clinched the Pacific Division title March 31. The Knights won the Western Conference on May 20. Their run didn’t stop until June 7, when they lost the Stanley Cup Final in five games.

The team provided inspiration the entire time. Like many Las Vegas residents, the Knights were transplants. But they were proud of their new city. They worked hard to represent it. They gave locals something to latch onto.

“We were down before games like two hours before, and we were staying after because that sense of community existed that they brought,” Nyman said.

The team is holding a blood drive Saturday at City National Arena. Some players are visiting with blood donors, while other groups are going to police stations, firehouses and other locations to visit employees impacted by the shooting.

The team has done similar things each of the previous four years.

“They’re the real heroes,” Fleury said. “We play a game for a living, and these people risked their lives and saved others.”

Still, Las Vegas got its first major league franchise when it needed it most. The city was hurting. The Knights became one way people could heal.

“I think we instantly became kind of like a family,” Karlsson said. “Us and all the fans.”

Route 91 photographer finds sources of hope in those he saw