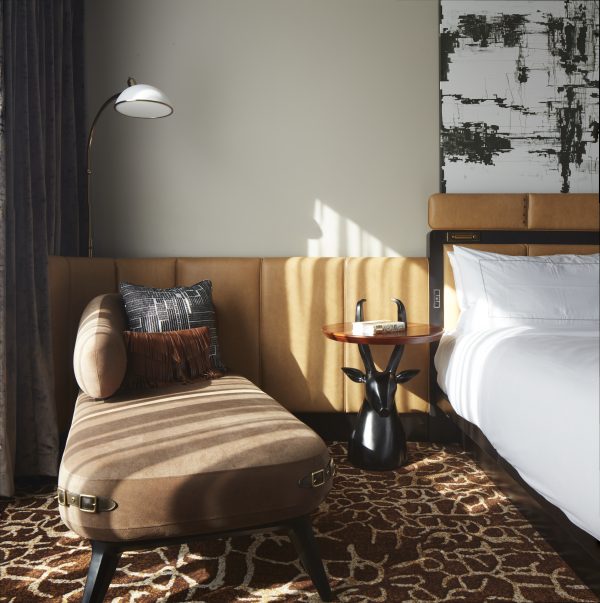 It’s rare to witness an artist these days that can rely on pure talent and creativity to lead them to the top. TikTok star turned music phenom—Tai Verdes has solidified himself as the next one to watch.

Three months into the COVID-19 pandemic, Tai was an essential worker with a nine-to-five job at a Verizon Wireless store. He has since garnered more than 1 billion global streams and more than 20 billion social views. The singer/songwriter/producer might appear to be an overnight success following his hit ‘Stuck In The Middle’ —but his journey was many years in the making. Growing up his mom encouraged him to play the guitar, piano, and ukulele. Standing at a modest 6’7” he played on his college basketball team until he eventually dropped out. He was rejected by The Voice, American Idol and in his words ‘had a lot of weird jobs’. After winning $50.000 on the MTV Dating show Are You the One, he moved to Los Angeles and tried comedy, modeling and acting all of which contributed to who he is at this very moment. Releasing a slew of melodic songs that grip the souls of fans worldwide he has indeed found his own formula. Whether perfectly visualizing about telling his parents he smokes herb or his last day on earth his message pulls the listener in.

Fast forward to now and the release of his second album—HDTV—a continuation of his first studio album TV. Tonight the 26-year-old singer will be performing in Nashville, Tennessee with Live Nation for the “Stay With” series. This cool collaboration showcases how Hilton connects touring artists, their fans and their adventures through unique music towns. But first Tai will perform at an intimate listening party hosted by Curio Collection by Hilton at Hotel Fraye Nashville on the rooftop of the swanky newly-opened hotel. Planted right in the heart of Music City, the modern sleek—yet innovative design headed by the EOA group is a sight to see at the turn of every corner. Serving luxury and hospitality at its finest, this new hotspot serves as the perfect backdrop for Tai’s private performance before his sold-out show at The Brooklyn Bowl Nashville.

The Source got to chop it up with Tai about his formula to songwriting, his love life on tour and one of his favorite songs that you’d never guess.

To the public it may seem you’ve been teleported into success, what would you say contributed to turning your story around to where it is today?

I think… production and working. You have to tell people how to address you. I think that’s what people forget. they’re like ‘once I get this many things or this many accolades people will change the way they address me’. I literally right before this was like.. I gotta tell them to start saying producer after songwriter when they just introduced me for this. What people will do is, they will go with the stock option of what they’ve seen before. You have to say ok that’s cool you’ve done your research in that way but this is what I’m trying to do in the future. This is how you change that perception, constant reminders and constant tweaking which takes mental endurance, and you can’t do that if you’re not putting the work out.

Now you’re at the point where you’re gonna be put in a box by the media in an effort to categorize your music but I hear a little hip hop. Do you incorporate hip hop into your music?

Of course yes hip hop is a part of it, it’s how I grew up. I listened to 50 Cent for an entire month then I moved on to a grammy nominated cd of all these grammy nominated songs then I moved on to Outkast and Speakerboxx and all of Kanye’s discography and Chance the Rapper and Kid cudi and that’s what I kind of grew up on. I think the best music incorporates a lot of things together.

So you studied a lot of hip hop artists?

Well I studied all types of music, not just hip hop, I listened to the United Airlines theme song It’s called “Rhapsody in Blue” by Gershwin and its so amazing— it’s one of my favorite songs, I also love Shrek the Musical, the songwriting in that is amazing too. I know every single thing that I like in music and I try to put it together.

So you dropped out of college, you were rejected from singing shows, you didn’t buy the Jordan’s with the money you won…

(Interjects) I got the free Jordan’s (laughs)

You didn’t do anything common but made it work, what advice would you give someone that is where you were three years ago?

I’d probably say (long pause) I don’t think any artist is where I was three years ago because I was really ready to blow up on this particular platform. Like I said I had been video editing myself for a really long time, I had a podcast where I would take smaller clips of myself and I’d put the words under it so I was already doing what TikTok was doing in the first place. So I’d just say delve into everything because you will be video editing yourself. Go into trying to make your own little music videos. I made my own videos, even though they’re bad I made my own videos. And there’s a saying about things you try in the beginning…if you turn a nozzle to a hose that hasn’t been running for a long time it’s gonna be shit water for a long time then after that there will be drops of clean water and that’s my first song Stuck In The Middle that got me through the breaking point of the industry. Then after you like, keep it on for a long time, t’s all clean water. I took that quote from Ed Sheeran.

Is there an emotional part after working so hard then receiving this credit for the music, do you feel like yes they finally get it or do you not really care?

I don’t think anyone is ever really gonna get, I think as people it’s hard to get a person unless you talk to them, even you, just coming here and talking to me you said ‘wow I see a different side of you’. Do I want people to get it? Kind of? I really honestly don’t care.That’s the strongest thing I have… it usually takes years for people to make a second album and I look at the trends. I just don’t really care about a second album. Everyone is like congratulations, congratulations! What are we congratulating? The fact that I made a second album? Back in the day they made 30 albums. Miles Davis, if you go to his discography right now there’s live albums, there’s collaboration albums, so now there’s so much celebration over two albums I don’t get the hype about that.

So we see you’re gonna reach your goal to make ten albums but then what happens after that, will you produce for other people?

I think that’s part of it just doing whatever I want. I wanna make my own label, I wanna make my own clothing brand. I want to have a bunch of different verticals. And once I do that and I am successful because all you have to be to be successful is to just do it. Then you can show other people that you can do whatever you want to.

To me, your music feels like a hopeless romantic mixed with brutal honesty. Like I love you so much, but I love her too. Where is your relationship with love?

Umm I think this whole album is a dedication to ‘Stuck in the Middle’ because even though I say hoes in the beginning it’s a love song. But yeah it’s really about my vulnerability with the entire topic. Having someone when I first dropped out of college my first album sounds like this and having someone in my life now and what that sounds like, being vulnerable with my emotions.

It’s difficult to be on tour and maintain a relationship, how do you deal with that?

In the beginning I wasn’t in a relationship for the first couple of tours then I just basically got into a relationship later so I haven’t been in a relationship the entire time that I was on tour. But I’m just a worker, some people when they go on tour the first time they are like ‘I made it’. And they could be playing to 500 people which is a show. Or they could be going to a club getting free bottle service and they say ‘I made it’ in some random city. But I think if your goals are something specific, you kind of tend to adopt the lifestyle of what you need to do to achieve those goals. For me I need to be in my place looking at beats and I was like damn I don’t like any of these I gotta call more producers and get more beats.

Well it’s hard for women to care about that but that was such a lovely soliloquy but you know women… right?

(laughs) Yes, yes women don’t care. That was such a lovely soliloquy. (laughs) I mean you just have to talk and communicate.

And be honest. And even still they’ll be like ‘when are you coming back’??

(laughs) Yeah exactly it’s just about getting through that part.

Some say your songs are catchy but I feel they are relatable, is there a formula to your method?

For me I think it’s about storytelling with production as well as the lyrics because if you think about any song that you remembered in the past….

The Luniz I Got 5 On it,,, you have the new version of that.

Exactly! Exactly! Right, so it’s just storytelling. I think all my songs are stories and that’s why people remember them and then they call them catchy because that’s the only word they have to describe it. Think about ‘It Wasn’t Me’ by Shaggy. That’s an entire story and people are like ‘is it catchy or just a really good song?’. It’s a really good song that happens to be catchy. There’s Tyler the Creator songs that don’t have choruses that are also catchy. When you use words like hook and catchy it kind of puts it into ‘is it pop’?

What do you want people to know about Tai?

Yo, whenever you’re ready to listen…listen. Don’t listen to my stuff unless you’re ready. I’m doing stuff that’s kind of weird over here.

…And by the looks of Tai’s growing fanbase and sold-out shows we all just might be a little weird too.

Get into Tai Verdes below.