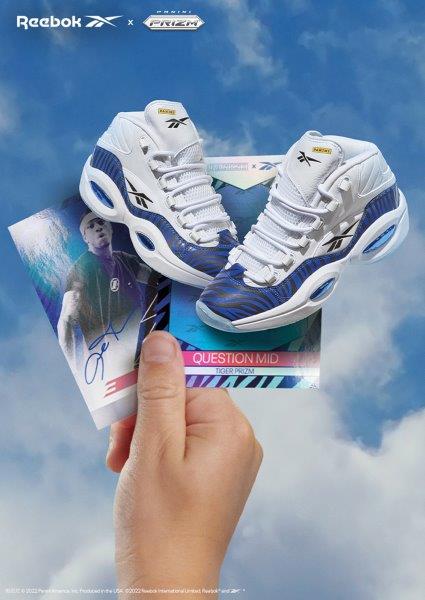 Reebok and sports card manufacturer Panini America has today unveiled a unique partnership that combines the worlds of sneakers and collectibles and features Allen Iverson and the renowned “Prizm” brand as cultural icons. Three “Prizm” parallel incarnations of “A.I.famous “‘s Question basketball sneaker will be featured in the collection, which will be available Nov. 4 alongside a retro-inspired fashion capsule (priced between $40 and $60).

With its high-gloss Optichrome designs, sought-after rookies, and desired short-print parallels, Panini America’s “Prizm” sports card line, which was first released in 2012, has swiftly become one of the most wanted and iconic items in contemporary sports card culture. Then there is Allen Iverson, a six-foot-tall guard from Hampton, Virginia, who burst onto the scene as a rookie in 1996 and went on to reinvent basketball and its numerous subcultures while donning his distinctive Reebok Question. These two unstoppable forces collide in Reebok x Panini America.

“This has been a long time coming,” commented Jason Howarth, VP of Marketing at Panini America. “The Prizm brand has helped launch sports trading cards into the global mainstream. It reaches beyond the hobby, just like Iverson reaches beyond basketball. To be able to authentically bring together two iconic brands who each have such a deep connection to sports, collectibles, and culture – we think this one will be fun for everyone who engages with it.”

A pack of limited-edition Panini America x Reebok Iverson trading cards will be included with certain pairs purchased through Reebok.com and regional shops. Each card has lovely AI images from the early 2000s, as seen in photographs by the renowned photographer Gary Land, that was inspired by the “Prizm”, “Question,” and other Reebok Iverson product lines. Customers will be able to “pull” unique “Prizm” parallel cards, short-printed Iverson on-card autographed cards, Iverson-worn patches, and more from these packs. Fans can signup for release reminders at Reebok.com/US/Classics-Basketball.