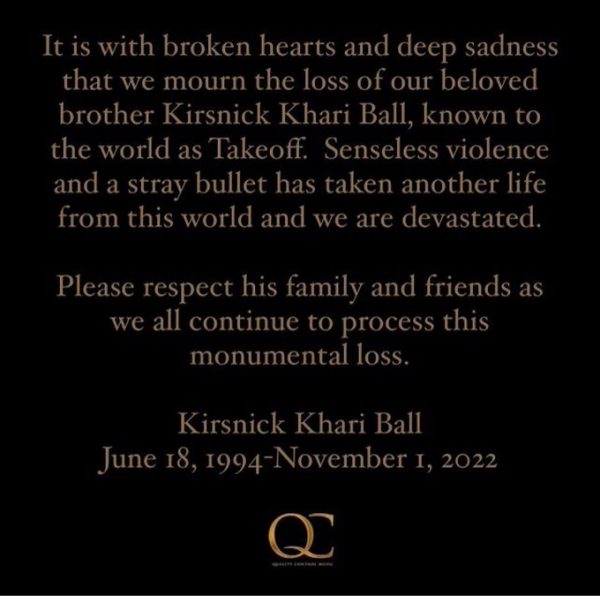 Following the death of Migos member Takeoff, the label to which he was signed, Quality Control Music, has released a statement.

“It is with broken hearts and deep sadness that we mourn the loss of our beloved brother Kirsnick Khari Ball, known to the world as Takeoff. Senseless violence and a stray bullet has taken another life from this world and we are devasted.

Please respect his family and friends as we all continue to process this monumental loss.”

“Young King @yrntakeoff I don’t know where to begin but I want to say that anybody that knows me knows how much I love you and anybody that knows you knows that you definitely didn’t deserve to die at such a young age. We only get 1 life and once it’s gone it’s over, no coming back. So with that being said I want our community to remember that we don’t have to continue to result to violence every time there is a disagreement. It’s ok to love your brother and sister. We all have been guilty of self hate but I pray this never ending cycle will some day change us all.”

Takeoff died after a shooting at a Houston bowling alley. According to TMZ, Takeoff was killed after 2:30 a.m. when shots were fired at 810 Billards & Bowling. The shooting occurred during a dice game. After an altercation began, the shooting followed, striking Takeoff near his head. He was pronounced dead at the scene.

Takeoff was one-third of Migos, one of the most influential hip-hop groups of all time. He exploded on the scene alongside Quavo and Offset with the 2013 “Versace.” Throughout his career, he contributed to the Culture series of albums, delivered The Last Rocket solo effort, and most recently dropped off the album Only Built for Infinity Links with Quavo.

Rest in peace to Takeoff.

If You Are For Gangsta Rap, You Can’t Also Be For Black