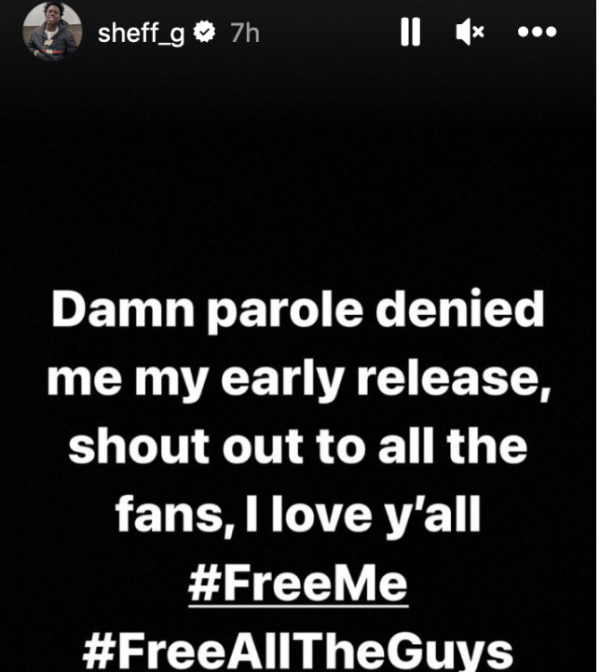 According to reports, Brooklyn rapper Sheff G will not be granted an early release from his two-year prison stint.

In October 2021, Sheff, whose real name is Michael Kyle Williams, was sentenced to two years behind bars after he pleaded guilty to criminal possession of a weapon in the second degree.

On Wednesday, Sheff took to IG to let his fans know that he wouldn’t be coming home any earlier.

Brooklyn drill rapper 22Gz claimed that Sheff was being extorted while behind bars, but Sheff responded on Instagram to his rival’s claims.

“Done hurd I turn this and that .. done hurd im getting extorted and allat lies and rumors that the broke dirty and worthless has made up Imao, whats next?” he wrote.

“N-ggas better ask anyone they kno up in these upstate prisons about me ! , million dollar nigga chilling in general population never been disrespected without the boomerang effect, all yu got is ya name and ya word .. and my name would never be tainted, my reputation speaks for itself… mr front line action … mr movie himself!”

Sheff is currently held in Riker’s Island’s Robert N. Davoren Center, where he will remain until he is moved upstate to complete his sentence or released.

Meta to Host The Notorious B.I.G. VR Concert on Dec. 16