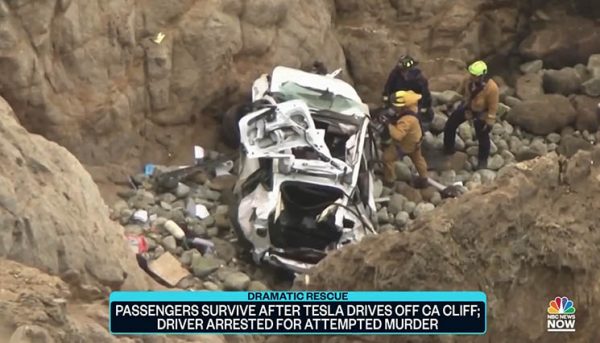 A Pasadena radiologist was charged with attempted murder and child abuse after he drove a Tesla 250 feet off a cliff in San Mateo, CA. on Monday, Jan. 2.

According to the California Highway Patrol, Dharmesh A. Patel, 42, of Pasadena, his wife, 41, and two children – ages 4 and 7 – were inside the Tesla when the car plunged off the side of a cliff at a spot known as the Devil’s Slide.

Witnesses say the car was speeding when it veered off the highway and plunged over the cliff. CHP officials said the car made an initial impact before flipping multiple times and landing on its wheels on the rocks below.

All four occupants walked away from the wreckage. Initial reports claimed all 4 occupants were injured. But according to updated reports, the children were unharmed.

The children reportedly told CHP their father tried to kill them.

Rescue teams risked their lives descending down the steep, jagged cliff to airlift the four occupants to safety. CBS News chopper video shows the harrowing rescue from a Tesla at the bottom of a cliff just feet away from the Pacific Ocean.

Teslas have a self-driving feature and a manual option, but investigators don’t know which one was in use at the time of the crash. CHP said the driving mode “does not appear to be a contributing factor in this incident.”

The spot where the car went off the cliff has no guardrail and it is known for fatal accidents.

“We go there all the time for cars over the cliff and they never live. This was an absolute miracle,” CHP said. “CHP investigators worked throughout the night interviewing witnesses and gathering evidence from the scene. Based on the evidence collected, investigators developed probable cause to believe this incident was an intentional act,” the CHP said.

Officials believe the Tesla Model Y’s safety features and airbags may have saved the family. The sticker price of a Tesla Model Y ranges from $65,990 – $69,990.

According to DailyMail.com, the Tesla Model Y has multiple airbags: front airbags, seat-mounted side airbags, and curtain airbags, all of which appeared to have inflated upon impact.

Patel was discharged from a hospital on Wednesday and moved to the San Mateo County Jail where he is being held without bond.