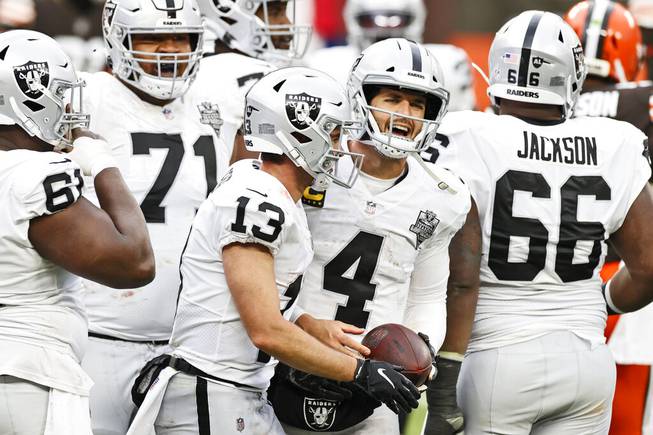 Las Vegas Raiders quarterback Derek Carr (4) and wide receiver Hunter Renfrow (13) celebrate after Renfrow scored a 4-yard touchdown during the second half of an NFL football game against the Cleveland Browns, Sunday, Nov. 1, 2020, in Cleveland.

It’s not often that an offensive line takes center stage in the NFL, but circumstances thrust the Raiders’ blockers front and center leading up to Sunday’s game at Cleveland. And they came through in a big way, collectively playing the starring role in a crucial, 16-6 victory that significant enhanced Las Vegas’ playoff odds.

It wasn’t necessarily pretty or captivating, but the game was won in the trenches as the Raiders pummeled Cleveland on the ground to the tune of 208 rushing yards. Las Vegas converted 15 first downs via the running game while amassing a nearly 2-to-1 advantage in time of possession.

Coach Jon Gruden credited the offensive line and the ground game for powering Vegas to the win.

“We ran the ball a lot of different ways,” Gruden said. “From a single-back set, from a two-back set, double tight end set. Derek Carr even got involved. It was a great job of protecting the football and running the ball and possessing the ball, which was a key ingredient in winning.”

It was just last week that the Raiders had to practice four straight days without their starting offensive line due to Trent Brown’s positive COVID-19 test, and a number of factors contributed to the increased spotlight on the O-line this week, including inclement weather and a ferocious pass-rusher on the opposing side.

Pre-game developments added to the drama.

The team anticipated that Brown would be able to suit up and start at right tackle after coming off the COVID reserve list, and that was the plan 90 minutes before kickoff. But according to Gruden, Brown became “ill” in the locker room and had to be added to the inactive list late in the process.

That bumped backup tackle Sam Young to the starting lineup and elevated Brandon Parker from the inactive list to second string. And of course, Young suffered an injury in the first quarter and had to leave the game, forcing Parker into action at right tackle.

Parker, a third-year swing tackle, stepped up and got the job done, as did the rest of the offensive line. With high winds and wet conditions making it tough to execute a precision passing attack, the Raiders ran the ball 45 times and consistently pushed the Cleveland defense backward, opening lanes and moving piles in short-yardage situation.

Gruden credited Parker for being ready, as well as offensive line coach Tom Cable and offensive coordinator Greg Olson for adapting on the fly.

“Brandon Parker woke up today, he was inactive,” Gruden said. “Brandon Parker was eating breakfast thinking he was inactive. And wouldn’t you know, he’s pressed into service early in game. We’re fortunate to have him. You’ve got to give the offensive line and Tom Cable and Greg Olson a great amount of credit.”

Parker and company paved the way for Josh Jacobs to run for 128 yards on 31 carries, both season highs for the second-year back.

That kind of performance was a relief to Jacobs, who is trying to avoid the appearance of a sophomore slump.

“I think it’s about time we had a run game like that,” Jacobs said. “It just feels good to be that dominant.”

It took a while for the offense to find its groove. Cleveland took an early 3-0 lead, and the Raiders finally got on the board late in the second quarter with a 16-play, 58-yard drive. It wasn’t easy; Las Vegas had to convert two 4th-and-1 plays on the drive, first at midfield on a bruising run by fullback Alec Ingold, and later inside the red zone when Josh Jacobs dove forward for a yard, but the blocking got it done and Daniel Carlson then knocked through a 29-yard field goal to tie the game, 3-3.

Las Vegas closed the half with another long drive, this time going 51 yards in 12 plays to set up Carlson for another field goal with zeroes on the clock.

Cleveland drove for a tying field goal to open the second half, but the Vegas offensive line imposed its will again, resulting in another marathon drive (15 yards, 71 plays). After possessing the ball for nearly nine minutes, Derek Carr hit Hunter Renfrow for a 4-yard touchdown to put the Raiders ahead, 13-6.

The Las Vegas defense forced a punt on Cleveland’s next possession, and that gave the Raiders’ offensive line a chance to put the game on ice.

Starting at the 20-yard line with 13:11 remaining in the fourth quarter, the Raiders drove 79 yards in 13 plays (10 runs) before stalling out at the 1. Carlson came on to kick a field goal and make it a two-score game and essentially put a bow on it.

It ended up being a 13-play, 69-yard drive that burned 8:47 off the clock, and that was par for the course for Las Vegas on Sunday; five of the team’s seven possessions lasted at least 10 plays, and three of them lasted at least eight minutes.

It was the perfect way to win a bad-weather game on the road, and now the Raiders are looking at a very favorable path to the playoffs.

Of Las Vegas’ nine remaining games, only two are against teams that would make the playoff cut if the season ended today (vs. Kansas City on Nov. 22, vs. Indianapolis on Dec. 13). The rest of the opponents are under .500, including a contest against the winless New York Jets and two games apiece against the Los Angeles Chargers (2-4) and Denver Broncos (2-4).

The road to the postseason is wide open for the Raiders, and they can thank the boys up front for that.

“I’m really proud of our offensive line,” Carr said. “I wish I could talk about them for like 30 minutes. I’m just proud of those guys and what coach Cable and Olson are able to prepare those guys for anything and any situation. It’s pretty unbelievable, what they’re able to do. It shows that we have good football character.”