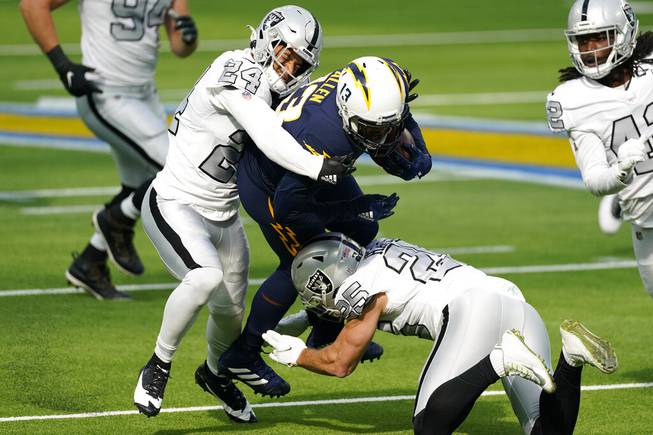 Against the better judgment of just about everyone who has followed his team this season, Jon Gruden chose to put his faith in the Raiders defense on Sunday. And he was rewarded — barely.

Gruden deferred to the struggling Las Vegas defense not once, but twice in key moments late in the Raiders’ 31-26 win at the Los Angeles Charglers, and thanks to a couple of heroic plays by backup cornerback Isaiah Johnson the Raiders secured a heart-stopping victory in improving to 5-3 overall.

The Chargers thought they had scored a game-winner on a touchdown catch by Donald Parham with no time left, but the referees reviewed the play and found that the nose of the ball had touched the ground after being knocked loose by Johnson.

It was as close a win as a team could have, and considering it was a road victory over a division opponent, the Raiders will take it.

Some keys from Sunday’s game:

Twice in the fourth quarter the Raiders found themselves faced with 4th-and-2 situations in Chargers territory. Both times, Gruden opted to pull his offense off the field, and it almost cost Las Vegas the game.

The first occurrence came early in the fourth quarter with the Raiders nursing a 28-20 lead. Instead of going for it on fourth down from the Chargers’ 42-yard line, Gruden opted to punt. After a minimal shift in field position, Los Angeles drove the field for a touchdown.

The Chargers went for a 2-point conversion to tie, and Las Vegas got a break when quarterback Justin Herbert had to leave the field due to an injury. Backup QB Tyrod Taylor came in for the 2-point play and nearly scrambled across the goal line, but linebacker Nick Kwiatkoski made a superb open-field tackle to preserve the narrow lead.

Minutes later (after a gift of a muffed punt by Los Angeles), Carr drove the Raiders to the LA 13-yard line, where they were faced with another 4th-and-2 decision. After seeing their lead nearly evaporate the last time he trusted the defense, Gruden nevertheless did it again, opting for a short field goal and a 5-point lead with 4:42 to play.

Herbert returned to the game and picked apart Las Vegas’ prevent defense on the final drive and got the Chargers to the goal line with six seconds on the clock. That was enough time for two plays, and Herbert opted to test Johnson with a pair of jump balls.

Both plays ended the same way, with the receiver (first Mike Williams, then Parham) initially getting his mitts on the ball and Johnson successfully working to dislodge it on the way down.

Gruden owes the second-year corner a debt of gratitude, because if Johnson hadn’t knocked down those final two balls, the coach would be fielding a lot of questions about his faith in one of the NFL’s worst defenses.

Last week it was Josh Jacobs carrying the offense, as the Raiders handed him the ball 31 times in an old-school, run-heavy 13-6 win at Cleveland. This week the ground crew took a more egalitarian approach, with Jacobs and backup Devontae Booker both getting their share of carries and combining for 133 yards and a pair of touchdowns.

Jacobs toted it 14 times and picked up 65 yards, and he scored his sixth touchdown of the season. Booker ran eight times for 68 yards, including a 23-yard scoring run in the first quarter. As a team, Las Vegas racked up 160 rushing yards at a clip of 6.2 yards per carry.

The ground production was all the more impressive considering the Raiders did it without a couple of key pieces on the offensive line. Right tackle Trent Brown missed his second straight game due to a positive COVID-19 test, and left tackle missed his first game due to injury in three years. Backup tackles Brandon Parker and Sam Young had some struggles in pass protection, but they opened enough holes in the running game to give the Las Vegas backs a chance to control the game.

Take a look around the AFC, Raiders fans, because if the season ended today your team would be playoff bound.

Of course, this is only the midway point of the 2020 season, but at 5-3 the Raiders currently tied for the seventh and final playoff spot and would earn the berth via tiebreaker, as they have a better division record (2-0) than Indianapolis. And the good news is, the back half of the schedule should get significantly easier, with a game against the winless New York Jets and a pair of contests against the Denver Broncos (3-5) still to come.

It’s probably too early to put down a deposit on tickets for Wild Card Weekend, but after three three straight seasons with a losing record, the Raiders are firmly in the hunt in their first year in Las Vegas.