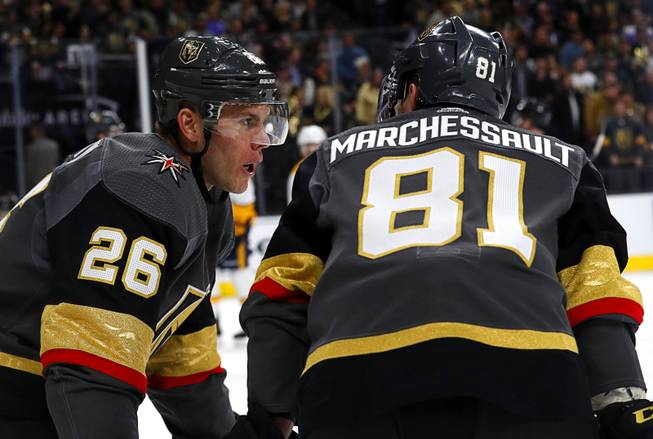 The Golden Knights have made five trades over the past two offseasons.

Some were expected, like Colin Miller’s salary dump last season. Some took people by surprise, like the Max Pacioretty acquisition in 2018.

Vegas will likely again be active in the trade market this offseason. Some trades are more likely than others. Here are five possibilities:

The writing on wall indicates that Fleury’s days in Vegas are numbered.

The Golden Knights acquired Robin Lehner at the trade deadline and proceeded to start him in goal for 16 of their 20 playoff games, including a pivotal Game 7 against the Canucks in the second round.

Near the end of Vegas’ playoff run, reports surfaced that the Golden Knights had a hand-shake agreement with Lehner on a five-year extension worth $5 million per year. Lehner has denied the reports.

If the Golden Knights are going with Lehner as the goalie of the future, it means the first face of the franchise could be on his way out. Fleury had one of the worst statistical seasons of his career in 2019-20, and is signed for $7 million for the next two seasons. It’s hard to commit $12 million of the cap to two goalies.

A potential Fleury trade is complicated by the 10-team no-trade clause in his contract, which allows him to submit a list of teams to which he can veto a trade. The Golden Knights would need to find one of the other 20 teams in the league, then agree on a price: Will the Golden Knights receive assets back? Will they need to throw in a sweetener in the form of a draft pick for their soon-to-be 36-year-old goalie? Will they need to retain salary?

It won’t be easy, either logistically or emotionally to trade a fan favorite and one of the most beloved players not just on the team but across the league. But it also might be the best move for both sides.

If this trade happens, it will be entirely because of salary-cap considerations. Even if the numbers don’t necessarily match his cap hit (38 points in 71 games), Stastny remains a valuable piece for the Golden Knights. He’s responsible in both ends, plays in all situations, and along with William Karlsson is one of two bona fide top-six centers on the team.

And yet he makes $6.5 million in the last year of his deal. If Vegas wants to make some moves this offseason, it would be nice to have that space. The issue is, space is used to acquire good players, and getting rid of a good player in order to have space is a tough sell.

A trade of Stastny is risky, in that it leaves a gaping hole down the middle on a team deep in wingers, but not so much in impact centers. Dealing Stastny would require a lot of faith in either Cody Glass to make the leap the organization believes he can, or in Chandler Stephenson to remain at the high level at which he played with Vegas.

It’s likely Stastny stays because of positional need and the role he plays. Vegas would also need to find a taker for a player who turns 35 in December and finished a year with the fewest points in a full season in his career. Stastny figures to play out the final year of his contract in Vegas, but if the Golden Knights can acquire a top-six center elsewhere, this could be worth keeping an eye on.

The Golden Knights are deep on the NHL blue line, with six defensemen who played the majority of the postseason all under contract for next season and five them for the year after that. Dealing from depth is sound strategy, which could make the blue line an interesting starting point.

Shea Theodore is the anchor of the defensive core and won’t be traded. Alec Martinez was just acquired at the trade deadline, and management raved about how he elevated Theodore’s game. Nick Holden and Zach Whitecloud signed two-year extensions within in the past year.

McNabb is making just $2.5 million against the cap for the next two seasons, making him unlikely to move. Every dollar counts when dealing with a flat salary cap, but it’s hard to see Vegas recouping more value out of that $2.5 million if it’s not dedicated to McNabb, but that’s also the type of player teams are interested in acquiring for themselves.

Schmidt has a 10-team no-trade list as well as a $5.95 million cap hit, but there would be no shortage of interest if he was made available. Vegas would like to keep him, and trading him would only make sense if the Golden Knights’ reported interest in star free agent defenseman Alex Pietrangelo is true. Pietrangelo should command a contract in the high seven-figures at minimum and, like Schmidt, plays on the right side. Schmidt could be traded to both make space and offset some of the cost.

If the Golden Knights want to acquire a big-name player without sacrificing talent at the NHL roster, one of their top prospects might be on the way out. Glass is also one of the top prospects, but considering the injury that ended his season, it would be hard to justify selling low on him.

The Golden Knights have shown they’re not afraid to trade valued prospects if the deal is right. They dealt former first-rounder Nick Suzuki 16 months after he was drafted, which is about where we are with Krebs right now. Fellow 2017 first-rounder Erik Brannstrom was traded a few months after Suzuki.

The Golden Knights didn’t have a 2018 first-round pick and they don’t pick until 29th this season. Vegas spent a lot in prospect capital in its early years to maintain a competitive NHL team. At some point the Golden Knights will need production from younger, cheaper players on entry-level deals.

Krebs is the best player in the organization not to make his NHL debut yet, and even after the draft next month that will most likely remain the case. He would have three years of a cap hit under $1 million if he debuts either this season or next, making him extraordinarily valuable to a team that spends to the cap like Vegas.

That also makes him valuable to any other team. If Suzuki can yield Pacioretty and Brannstrom can get Mark Stone, it’s worth wondering what Krebs could bring back in a trade.

Imagine the fan response if the Golden Knights traded Fleury and Marchessault in the same offseason. It’s not likely, but it’s also not impossible.

There may be no recapturing the 75-point magic of the inaugural season, as Marchessault’s last two seasons have been remarkably similar. He had 25 goals and 59 points two seasons ago. This season was shortened and he missed some time, but prorating it over 82 games he would have had 27 goals and 58 points. There’s value in consistency.

Marchessault’s inclusion as a potential trade is less about why Vegas would want to deal him, and more about why other teams would want to acquire him. He’s signed for the next four seasons at a manageable $5 million cap hit and would bring a spark to any locker room he is in. He might have the most trade value among Vegas NHL players who could realistically be dealt (Theodore and Stone are going nowhere).

But if he does move, Marchessault could be the trade piece that nets Vegas a good player in return — someone like Minnesota’s Matt Dumba or Philadelphia’s Shayne Gostisbehere are intriguing — or the centerpiece of a larger deal for an even bigger name, like Winnipeg’s Patrik Laine or Carolina’s Dougie Hamilton perhaps?

Like Fleury, Marchessault is loved by the fans and a big part of the Vegas room. Like Fleury, he has no-trade protection, but to eight teams and not 10. The Golden Knights would need to be blown away to consider dealing Marchessault, but they shouldn’t hang up the phone the second his name comes up.