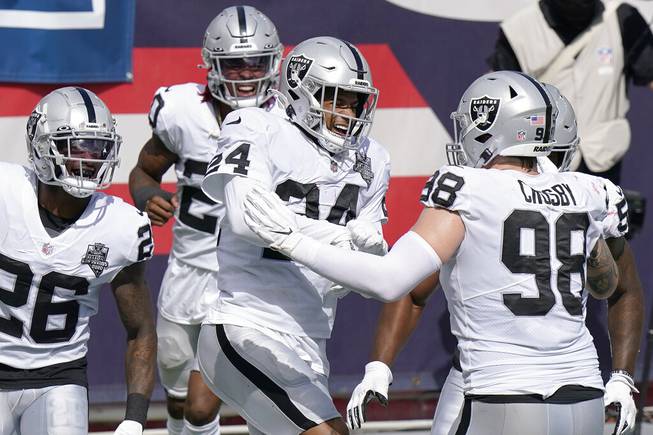 Las Vegas Raiders safety Johnathan Abram (24) celebrates his interception with teammates in the first half of an NFL football game against the New England Patriots, Sunday, Sept. 27, 2020, in Foxborough, Mass.

The Raiders’ fan base expressed outrage when the NFL moved the team’s game against the Tampa Bay Buccaneers up from Sunday Night Football to Sunday afternoon at 1:05 p.m.

The Raiders themselves were much less concerned with the shift. Ever since the announcement of the move Thursday afternoon, the organization has put up a united front: It doesn’t care about the schedule.

“We’re going to play Sunday at 1:00 they tell me, and we’ll be ready to go,” coach Jon Gruden reiterated Friday in his final pregame news conference.

It may have appeared that the NFL had set a precedent of pushing games back a day or two for teams dealing with positive coronavirus tests, as the Raiders are this week, but all of the reschedulings have been situational. And it determined that the Raiders’ situation did not merit a delay.

The only reason the NFL moved Las Vegas’ third home game at Allegiant Stadium at all was out of “an abundance of caution to ensure that a game would be available for fans on Sunday Night Football.” Translation: Sunday Night Football is weekly the NFL’s most-watched game, and the league couldn’t risk losing the revenue it provides if any other players join right tackle Trent Brown by testing positive for the coronavirus.

So reportedly has safety Johnathan Abram, though he will be ineligible to play against the Buccaneers after coming into contact with Brown on Tuesday. The league’s contact-tracing system found the linemen to be near Brown on Monday, meaning they have enough time to complete the five-day quarantine protocol before kickoff on Sunday.

If they all submit two more negative tests, then they’ll be cleared to play against Tampa Bay.

“I do believe there’s a good chance those men will be back soon,” Gruden said.

If not, there’s a much better chance the game will be delayed or rescheduled. The NFL has made it a last resort to force teams into forfeit and reports have surfaced that it’s even willing to hold the Super Bowl a month late, in March 2021, to avoid canceling any games.

The bigger issue for the Raiders at this point might be the preparation level of an offensive line that now hasn’t practiced for two weeks. Veterans were mostly given last week’s bye off, and now having been sent home before Week 7 game preparation ever began, some rustiness would to be expected.

That’s another factor the Raiders have downplayed, though.

“The beautiful thing about football players, we’ve been taught, really brainwashed, since we were kids that if someone goes down, it’s next man up,” quarterback Derek Carr said. “You go to practice, you lose starters, you lose this guy, you lose that guy and you just play.”

Young, a tackle, and Simpson, a guard, have already started games this season because of injuries. They would appear to be in front of the line to get more snaps if any of the four current starters in isolation are not ready to go or need more breaks because of conditioning.

The Raiders have the utmost faith in Hudson, Good, Jackson and Miller, though. The coaching staff regularly declares its offensive line the best in the NFL.

Gruden said the four players have taken part in the last three days’ worth of practices virtually.

“You can still get a lot of work done,” he said. “We’ve had a good week of practice.”

If everything goes according to plan, offensive line is not where the Raiders will be shortest against the Buccaneers Sunday afternoon. It’s actually their secondary where half of the starters are already ruled out with Abram joining cornerback Damon Arnette, who tested positive during the bye week but did not come into contact with any teammates, on the COVID-19 list.

Arnette would have been eligible to return from injured reserve against Tampa Bay after undergoing thumb surgery and missing Las Vegas’ last two games.

Delaying the game could have helped the Raiders with Abram potentially being able to return if it took place even a day later, but that would have caused problems ranging from short weeks to reschedulings down the road. It may still happen if any of the offensive linemen test positive over the weekend.

But the Raiders are operating under the assumption that they’re going forward regardless of who’s available. They want to play.

“We have to act like this is the group we are going out with and get ready to play,” Carr said. “And that’s just the culture we have here and the mindset we’ve taken. It ranks No. 1 in the weirdest things, and you all know we’ve seen a lot of weird things around here in my seven years.”