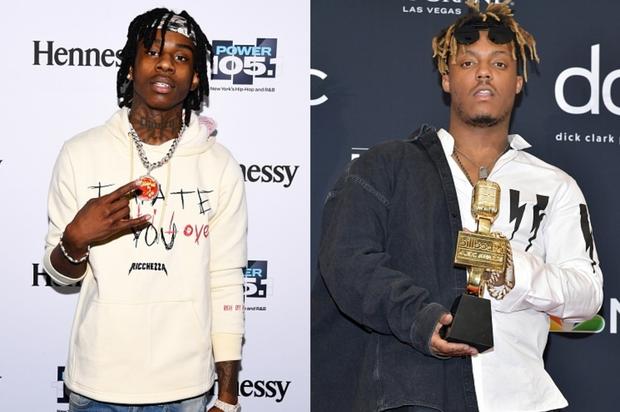 The rapper shared a throwback shot with the late Chicago artist on his Instagram today.

It has now been a little more than a year since Juice WRLD‘s unfortunate passing back in December of 2019, days removed from his 21st birthday. He was just beginning to scratch the surface of his success as well, with his second studio album released earlier that same year Death Race for Love reaching the top spot of the Billboard 200 chart. An adored figure among rap fans and artists alike, many have continued to mourn the loss of the talented rapper. Fellow Chicago native and XXL Freshman Polo G shared an unprovoked throwback picture of the two of them to his Instagram page today, penning a small tribute for the late Chicago rapper.

Polo, née taurus Tremani Bartlett, shared a photo of the two of them kicking it backstage. While it’s unclear exactly when the photo was taken, it looks like it could have been captured sometime in 2019. He captioned the brief tribute, “If u my dawg fr dont eva leave my side,” seemingly still mourning the loss of the “All Girls Are The Same” artist.

According to Lil Bibby, Juice WRLD was allegedly seeking out rehab prior to his death. “I found out that he was doing four. So I get to freaking out. Like ‘What the fuck.’ I get to telling people like ‘Look we got to send this kid to rehab, I’m telling everyone because I’m thinking ‘That’s a lot.’ Because all people I know only do at the max one. And these is the 30s,” Bibby said.

Polo G rose to prominence with this 2018 single “Finer Things,” and has gone on to experience bouts of critical and commercial success. His hard work has paid off, and the 22-year-old was able to purchase his mother her dream home earlier in the month.