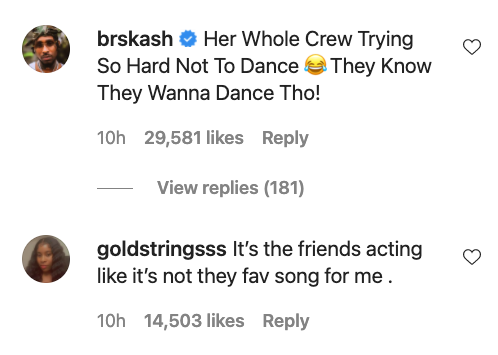 Yaya Mayweather and her entire crew were dead silent when “Back In Blood” came on at the club.

It’s not the smartest thing to go clubbing right now but, if you were at any events during NBA All-Star Weekend in Atlanta, you were bound to hear Pooh Shiesty’s hit record “Back In Blood” with Lil Durk. The song has gone global in recent weeks, going viral on social media with one of the most-heard rap lines all year. People love to scream out Durk’s “that’s my dawg” lyric, but one person went viral herself for her obvious disdain of the song.

Yaya Mayweather, the latest addition to Youngboy Never Broke Again‘s vast list of ex-girlfriends, was partying at the same club as another one of his exes, Jania Meshell, being spotted with their sections right next to each other. A few weeks ago, Yaya’s reaction to “Back In Blood” went viral after she whined, “turn this weak-ass song off”. Nobody else at the party seemed to care that she wasn’t feeling the song choice. The video has been recreated countless times on social media, and Yaya was faced with more embarrassment when the song started playing as she turned up at the club with her friends.

A new video shows Yaya and her entourage remaining completely still as the song plays. Yaya appears to take a phone call as the entire club happily blurts out Durk’s lyrics, while people in her crew try and resist the urge to sing and dance. In the other section, Jania was enjoying the song, dancing with her girls.

Many believe that Yaya’s aversion to the song has to do with her connection to Youngboy Never Broke Again, who is close to Quando Rondo. Because of what happened between Quando and King Von at the end of last year, some have suggested that Yaya is only trashing Durk’s part on the song to support the father of her newborn son.

Watch the video of Yaya during “Back In Blood” above.