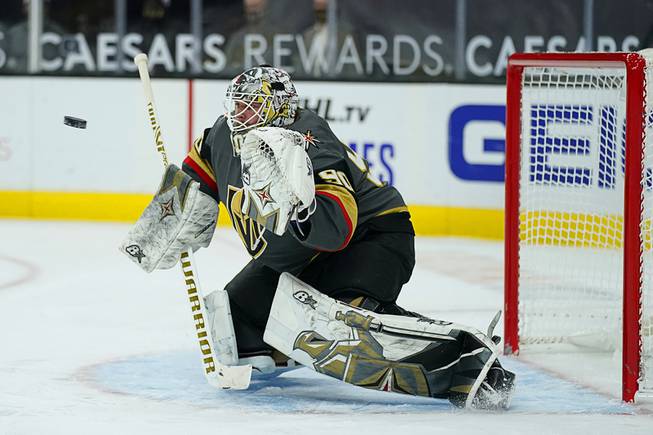 Vegas Golden Knights goaltender Robin Lehner (90) attempts to block a shot by the Arizona Coyotes during the first period of an NHL hockey game Monday, Jan. 18, 2021, in Las Vegas.

Robin Lehner is nearing a return to the Golden Knights.

The goaltender was assigned to AHL Henderson on a conditioning loan today and will practice with the Silver Knights until he is ready to rejoin the NHL club. A conditioning loan can last up to six days and three games, meaning Lehner could be back with Vegas as soon as next week.

“Great step,” coach Pete DeBoer said. “Obviously we’ve been waiting for him. There’s been multiple positive steps along the way to get to this point, but for him to integrate back into a full team practice is a great step to getting him back with us.”

Lehner hasn’t played since Feb. 7 against the Los Angeles Kings. He was scheduled to start Feb. 11 but was a late scratch with what DeBoer called an upper-body injury. He has not been at practice since.

Lehner was expected to be a major contributor to the Golden Knights this season. He was acquired at last year’s trade deadline, started 16 of the team’s 20 postseason games and signed a five-year extension in the offseason.

He’s played only five games this year because of the injury, accumulating a 3-1-1 record with an .890 save percentage and 2.96 goals-against average.

The Golden Knights haven’t missed a beat in his absence thanks to the strong play of Marc-Andre Fleury, who has started 13 of the last 14 games and is expected to start tonight against the Wild. Fleury is 12-4 this season, with a .943 save percentage and 1.57 goals-against average.

“Fleury has played amazing for us, but it’s a lot to ask of him to play every game and to stand on his head like he’s been doing,” forward Reilly Smith said. “That relief I think will help our team a lot.”

Lehner wasn’t the only injury news today. DeBoer said defenseman Alex Pietrangelo, who missed Monday’s game with an upper-body injury, has returned to Las Vegas for evaluation and will miss the remaining three games of the road trip. That includes Vegas’ first visit to St. Louis, where Pietrangelo spent the first 13 years of his career and the last four as captain.

“Obviously not a great sign that he returned home for evaluation,” DeBoer said. “I’m not concerned it’s long-, long-term, but he’s definitely out for the foreseeable future.”