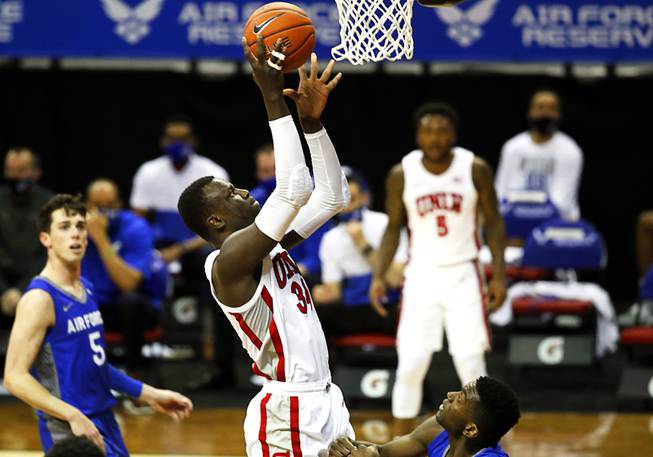 Is this the team UNLV fans have been waiting for all season?

T.J. Otzelberger’s squad looked almost unrecognizable on Wednesday afternoon, as they shook off a disappointing regular season to dominate both ends of the court in an 80-52 win over Air Force in the play-in round of the Mountain West tournament.

No. 7 seed UNLV will advance to face No. 2 Utah State on Thursday in the quarterfinals (6 p.m., CBS Sports Network).

The opening minutes may have induced a bit of anxiety among the UNLV faithful. Air Force executed a couple of backdoor layups and UNLV struggled to crack AFA’s zone defense, committing three turnovers on the first five possessions.

The Falcons staked out an early 12-8 lead, and at that point it was playing out like an Air Force kind of game.

Then Otzelberger did something he’s usually loathe to do, and went big. He inserted seldom-used forward/center Edoardo Del Cadia into the game, and he scored inside twice to provide a spark. Then Mbacke Diong picked up the baton and converted three straight baskets, including a steal and breakaway dunk, to push UNLV ahead, 18-14.

Otzelberger said that while UNLV game-planned to work the ball inside, Diong and Del Cadia went above and beyond to create good scoring opportunities.

“It was part of the plan, but I was really pleased with the effort Mbacke and Edo had at times in there to impose their will,” Otzelberger said. “We talked a lot about getting inside catches, getting guys going to the rim, scoring at the goal, trying to get to the foul line. Mbacke had tremendous energy, and when you play with that much energy the ball finds you.”

Diong finished with 16 points on 7-of-10 shooting, while Del Cadia chipped in six points off the bench on 3-of-4 shooting.

After the big men had sufficiently loosened up Air Force’s interior defense, it was Bryce Hamilton’s turn to go to work. The junior guard has struggled with his shot all season, but he continually sliced inside against the Falcons and finished at the rim with little resistance. He tallied 14 in the first half on his way to an efficient 18 points (8-of-13 FGs).

UNLV took a 39-21 lead into the break, and instead of resting on that, they turned it up a notch over the final 20 minutes.

Junior guard David Jenkins nailed five of his six 3-pointers in the second half en route to a game-high 21 points. UNLV stretched the lead as high as 31 points, and the eventual 28-point margin of victory was their largest against a Division I opponent all season.

While UNLV hit 9-of-17 from 3-point range, it was the easy, close-range shots that allowed the scarlet and gray to dominate. For the game, UNLV shot 57.4 percent and racked up 40 points in the paint.

Of course, Air Force had a lot to do with that, as the Falcons ranked dead last in rim protection this season, allowing opponents to shoot 73.0 percent around the basket. But UNLV was pointed in its approach and executed well enough to blow out a potentially pesky opponent.

Now that UNLV has survived the play-in round, Otzelberger will have just more than 24 hours to prepare his team for Thursday’s matchup against No. 2 seed Utah State. Unlike Air Force, which does not defend the basket at all, Utah State is led by the best rim protector in the nation, 7-foot center and three-time Mountain West Defensive Player of the Year Neemias Queta.

It will require a vastly different game plan and another top-end performance from UNLV in order to have a chance at an upset. But given the way the scarlet and gray played on Wednesday, it suddenly doesn’t seem all that far-fetched.

“The more physical team will win that game tomorrow,” Otzelberger said. “We have a lot of respect for their program, their coaches, their players. Their frontline is terrific, probably as good or better than anyone in the league with Queta and [power forward Justin] Bean. We’re going to have to match that physicality and toughness.”