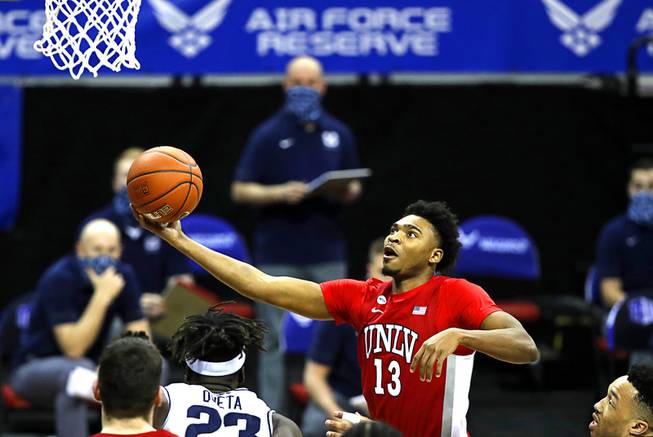 That’ll do it for UNLV in 2020-21, as Utah State pulled away over the course of the second half and eliminated the scarlet and gray in the quarterfinals of the Mountain West tournament, 74-53.

Aggies guard Marco Anthony and big man Neemias Queta took over in the second half, shredding the UNLV defense for a combined 23 points on 7-of-11 shooting over the final 20 minutes. Anthony finished with 15 points and Queta posted a double-double with 18 points and 13 rebounds.

UNLV’s backcourt of Bryce Hamilton and David Jenkins went ice-cold at the worst time. Hamilton started strong but faded, concluding his junior season with 16 points on 7-of-19 shooting. Jenkins went 1-of-13 from the field (0-of-7 from 3-point range) and tallied just five points.

It was a disappointing finish to a disappointing season for UNLV, which went 11-14 in the regular season and 8-10 in Mountain West play. Now begins an offseason that will include questions about the status of head coach T.J. Otzelberger (rumored to be a candidate for the Iowa State job) and the bulk of the roster.

Utah State pulling away from UNLV

Things are not looking good for UNLV, as Utah State has built a 55-41 lead with 8:00 minutes remaining.

The scarlet and gray are still struggling to convert from the field (33.3 percent overall) and in particular from 3-point range (4-of-15). Bryce Hamilton is now 5-of-14, while David Jenkins is 1-of-10 and 0-of-5 from beyond the arc. It’s hard for UNLV to beat anyone when their top two scorers are that cold.

Utah State has found its rhythm offensively and is now scoring with ease. Brock Miller has eight points in the second half, and Marco Anthony has scored 10 of his 15 since the break. The Aggies are passing the ball skillfully and UNLV is having trouble keeping up; USU is shooting 56.5 percent in the second half.

If things continue like this, it will mean the end of the season for UNLV.

After shooting 2-of-8 from beyond the arc in the first half, the Aggies have come out of the locker room firing and have connected on all three of their long-distance attempts. So while UNLV has actually made 3-of-5 from the field since the break, they’ve lost ground to a Utah State team that can’t seem to miss.

It appears Utah State is not as adamant about pounding the ball into the post. Let’s see if T.J. Otzelberger can adjust his defense to limit the 3-point looks while at the same time not allowing Neemias Queta to roam free inside.

UNLV tied with Utah State at half

Don’t look now, but UNLV might actually have a chance to pull off an upset of No. 2 seed Utah State, as we’re tied 24-24 at halftime.

The No. 7 scarlet and gray didn’t play a perfect half, but their physical approach has thrown Utah State off its game. All-Mountain West center Neemias Queta has been held to five points on 1-of-5 shooting, and UNLV is even on the boards with the Aggies, 20-20.

Bryce Hamilton played a superlative half in which he was seemingly everywhere. He scored a team-high eight points, grabbed three rebounds, recorded two steals and came up with a couple of loose balls. Hamilton did miss five attempts around the rim and shot 4-of-12 overall, but if he can convert those in the second half UNLV will have to feel good about its chances.

UNLV will also have to start hitting from the outside. They made 9-of-17 from 3-point range against Air Force, but that long-distance touch has abandoned them through the first 20 minutes tonight, as they’ve hit only one of their eight attempts.

UNLV’s team defense has been on point, especially in the post. Every time Utah State has entered the ball to the low block, whether it’s been Queta or one of the Aggies’ other big men, UNLV has swarmed the ball and consistently forced turnovers.

UNLV isn’t playing a perfect game by any means, but they’ve done a good enough job to build a 19-16 lead with 7:33 left in the first half.

Bryce Hamilton has played like a man possessed, and if it weren’t for a couple of missed layups he’d be on his way to a signature performance. As it stands, the junior guard has six points, two rebounds and an assist in 10 minutes.

The scarlet and gray have done a good job limiting Utah State center Neemias Queta to one point on 0-of-3 shooting. Mbacke Diong handled him straight up, and Edoardo Del Cadia held his own in the post against the 7-footer. UNLV has also sent some double teams at him, with positive results.

T.J. Otzelberger is still waiting for some 3-pointers to drop. UNLV is 0-of-4 from deep and will need to make their share in order to stay ahead of Utah State.

UNLV has attacked the paint in the early minutes, and with 15:34 left in the first half the scarlet and gray have an 8-7 lead over Utah State.

Bryce Hamilton has three quick buckets, all in the paint. One came on a little floater after he collected an offensive rebound, and another came on a baseline cut that freed him up under the basket for an uncontested layup. The third was the most impressive, as Hamilton sliced through the defense and finished at the rim over the outstretched arm of Utah State center Neemias Queta, the Mountain West Defensive Player of the Year.

UNLV’s other basket came via a Mbacke Diong post-up against Queta.

Queta got the better of David Jenkins, however, as he helped on a Jenkins drive and swatted the guard’s mid-range jumper. Still, the game plan appears to be focused on attacking the rim and challenging Queta, at least in the early going (perhaps to try to pick up a quick foul or two on the big man).

UNLV looked as good as it has all season in Wednesday’s win over Air Force, and now the No. 7 scarlet and gray will try to keep the momentum rolling in Thursday’s matchup with No. 2 Utah State in the quarterfinals of the Mountain West tournament (6 p.m., CBS Sports Network).

The hot-shooting guard duo of Bryce Hamilton and David Jenkins combined for 39 points on 14-of-26 shooting against Air Force, and UNLV could sure use another performance like that from its veteran backcourt as T.J. Otzelberger looks to advance to the MWC semifinals for the first time.

Senior center Mbacke Diong was terrific in the play-in win over Air Force, posting 16 points, eight rebounds and two steals in 25 minutes. And UNLV will need him to be even better today—especially on the defensive end—if they’re going to have a shot at upsetting Utah State.

There might not be anyone in the world with more experience going head to head with Aggies superstar center Neemias Queta, as this will be Diong’s fifth time squaring off against the future NBA draft pick. When they met for the first time this season, Diong helped limit Queta to eight points on 3-of-9 shooting as UNLV won, 59-56.

Diong won’t be able to replicate that effort all by himself. UNLV will need to help him in the post and mix up their defenses against Queta, who is averaging 14.7 points and 9.9 rebounds, but they will need Diong to show up on the big stage and play like the best big man on the floor.

Otzelberger believes the game will be won under the basket.

“We’re going to have to do a great job protecting the paint,” Otzelberger said. “They’re a team that really tries to hammer the ball inside.”

T.J. Otzelberger has been imploring his team all year to stay closer to 3-point shooters, and the scarlet and gray finally seemed to get it on Wednesday. They seemed aware of spacing and anticipated passes for the first time, and they scrambled out to contest shots with great energy, resulting in Air Force making just 2-of-18 from beyond the arc.

Utah State doesn’t attempt many 3’s (19.3 attempts per game, 267th in the country), but defending the arc will be just as important.

Otzelberger hopes the light has gone on permanently for his team.

“It’s been an Achilles heel for us all season long,” Otzelberger said. “Many of the things you need to do to guard the 3-point line effectively, we were able to implement and do [against Air Force]. It’s things that we work on all the time, and as a coach when the things you practice on a daily basis come to fruition during a game, you’re pleased.”

Queta is probably the best defensive player in the country. He is averaging 3.0 blocks per game, and Utah State ranks seventh in the entire nation in rim protection, allowing opponents to convert just 50.2 percent of shots around the basket. That’s all very daunting, but UNLV has to continue taking the ball to the basket aggressively.

They attacked Air Force’s defense (ranked dead last in rim protection) to the tune of 18-of-23 shooting around the rim, and they’ll need to convert at a similar rate—if not with the same volume—against Utah State.

Junior guard Bryce Hamilton had his best game as a finisher in a long time on Wednesday, hitting 6-of-11 from inside the arc, and forwards Diong, Edoardo Del Cadia and Moses Wood combined to make 12-of-16 from in close. With Queta looming as the last line of defense, UNLV won’t get nearly as many clean looks at the basket against the Aggies, but when they do find a crease in the defense they have to convert. Even just one or two missed layups will surely come back to haunt.