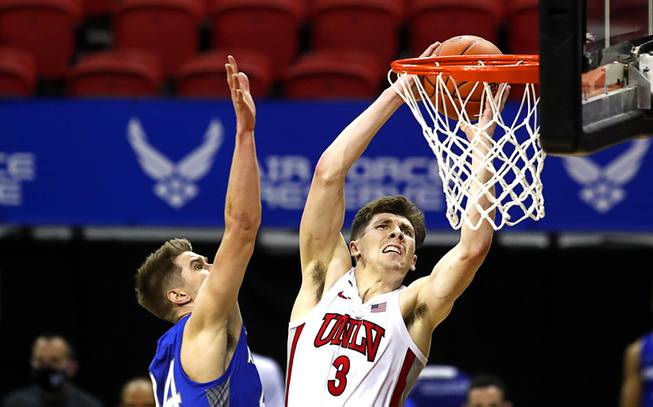 Caleb Grill is returning to Iowa State to be reunited with T.J. Otzelberger, following his former coach at UNLV to Ames, Iowa.

It will be his second stint in the Big 12 Conference program.

The 6-foot-3 guard started his career at Iowa State in 2019-20 before transferring to UNLV to play for Otzelberger. And a month after Otzelberger departed for Iowa State, Grill — not in a surprising move — followed.

The relationship started with Grill committing to Otzelberger at South Dakota State when he was a high school senior in Kansas. But he ended up decommitting and picking Iowa State after Otzelberger became the UNLV coach.

In a Sunday morning social media post, Grill wrote: “I can’t wait to be re-united with former teammates and continue to learn and grow as a player and person under Coach TJ and his staff and to play in front of the best fans in the country! #cyclONEnation.”

Grill was one of UNLV’s most productive players in the COVID-impacted 2020-21 season, averaging 9.1 points, 3.2 rebounds and 2.3 assists per game in logging about 33 minutes per contest.

He’ll have three years of eligibility.