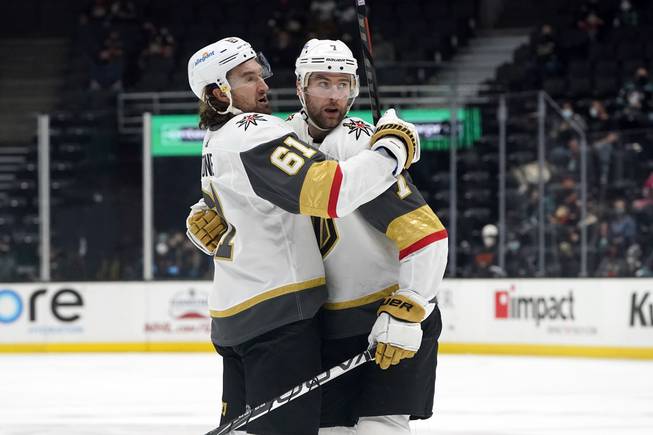 The Golden Knights entered play Sunday having scored 29 goals in their last seven games. They improved on that per-game pace against the Ducks.

Vegas scored five goals for the NHL-best 15th time this season, improving to 15-0-0 when scoring five or more goals. A different player scored every goal and 11 Vegas players — including the goalie — had a point as the Golden Knights beat the Anaheim Ducks 5-2 at Honda Center for their sixth win in a row.

“That’s why we’ve won six in a row: We’re getting scoring from everybody,” captain Mark Stone said. “Everybody’s contributing on a different night and we’re getting balanced throughout the 12 forwards and our D is stepping up and getting some goals as well.”

Max Pacioretty started things off with a redirect 3:25 into the game for his 22nd goal of the year and goal in six games.

The second goal was arguably Vegas’ most important moving forward. Alex Pietrangelo entered the zone and pulled up at the blue line looking for a pass, but saw no pressure from the Ducks and instead walked in and sniped it by Ducks’ goalie John Gibson.

It’s been an odd year for Pietrangelo, who joined Vegas after spending the first 12 years of his career with the Blues. That adjustment is tough enough for a player, but Pietrangelo also spent time on the COVID-19 list and missed 12 games with an injury in March.

He’s played in just 29 of Vegas’ 44 games, which has certainly impacted his performance. His goal was his fourth of the year after scoring 13 or more in the last four seasons with St. Louis.

Much of that stems from a lack of power play, where he has just two points after averaging about 15 in his career. His 5-on-5 numbers are commensurate with where they’ve been the past few years. His goal Sunday was at even strength, as have they all been this season.

“The goal numbers there, that hasn’t really bothered me,” coach Pete DeBoer said. “When we’ve dug into that at different points, he’s creating the same number if not more chances. It just hasn’t gone in. Goal-scoring’s like that. You talk to any goal-scorer, one year you can’t miss and the next year you can’t find one.

“The underlying numbers are really good and I think his game’s been at an elite level for a long time.”

If Pietrangelo gets going offensively the Golden Knights’ defense will be that much more dangerous.

Vegas defensemen entered the day first in the league in goals (28) and fourth in points (104) before Pietrangelo added to the total. Alec Martinez had two assists Sunday and Shea Theodore and Zach Whitecloud each had one.

Pietrangelo’s goal gave Vegas a 2-1 lead heading to the second period, where the Golden Knights added two more goals. Nicolas Roy scored for the second game in a row and after assisting on Pacioretty’s goal and Stone added one of his own for his fourth consecutive multi-point game.

Alex Tuch added an empty-net goal with 1:27 remaining to mark the fourth time in the last eight games Vegas has scored five or more goals.

“I think that’s where we play our best hockey. When we’re in the ‘O’ zone and making plays we’re hard to play against,” Roy said. “We’ve just got to keep playing that way.”

Vegas improved to 6-1-0 against the Ducks this season, and will see them one more time — on Saturday in Anaheim.

Marc-Andre Fleury started in goal for Vegas and made 33 saves. He’s allowed two goals or fewer in three straight outings. He even added a secondary assist on Stone’s goal, his 15th career point and first of the season.

He’s won both of those outings too, running his personal win streak to three games.

Some of that was his play — prior to his win streak he’d allowed three goals or more in five of seven games — but some of it is goal support. In six Fleury starts from March 19 to April 7, the Golden Knights scored just nine goals.

Players chalked it up as a coincidence that they were scoring fewer goals in games Fleury started. At least for one game that trend ended.

“It’s fun to be able to cheer for the guys and see them do well and smiling,” Fleury said. “Many guys have been working their butt off all season and it’s nice to see them getting some points.”