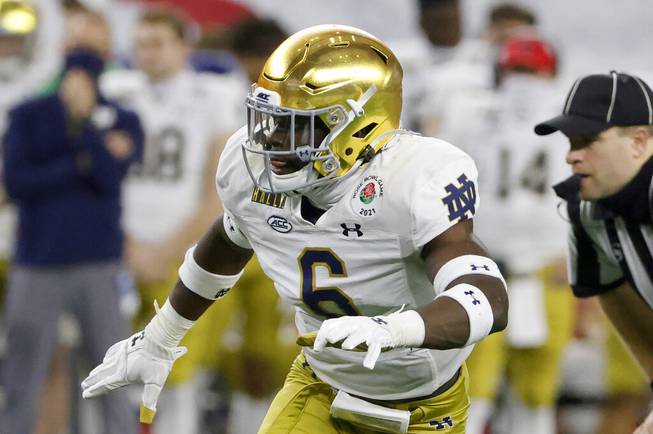 The Raiders haven’t had a true play-making linebacker in a long, long time.

Sure, Khalil Mack was an excellent player and was designated as a linebacker, but he was an edge defender and a pass-rusher by trade. And while Cory Littleton was brought in last offseason to make plays at the second level, it didn’t quite materialize on the field in 2020.

It has been a lengthy, decades-long drought for the middle of the Raiders defense, and maybe not coincidentally it has been a while since the team fielded a good defense in general. Does that mean Las Vegas will jump at the chance to take Jeremiah Owusu-Koramoah if the opportunity presents itself in the NFL Draft next week?

Teams are usually wary of using top picks on off-ball linebackers who don’t rush the passer, but if there’s a player who could break the mold it would be Owusu-Koramoah.

Though he’s a bit undersized at 6-foot-1, 215 pounds, the Notre Dame product simply makes plays all over the field.

In his two years at Notre Dame, Owusu-Koramoah racked up 142 tackles and 24.5 tackles for loss. He also notched 7.0 sacks, but he’s not really a pass-rusher. No, where Owusu-Koramoah really pops is when he’s defending in space.

When you watch Owusu-Koramoah, it’s play after play of a speedy, instinctive linebacker beating blockers to the point of attack. Over and over. Once he recognizes where the ball is going, he beats everyone to the spot.

On this play, Owusu-Koramoah reads the screen pass and bursts past two blockers to make a tackle behind the line of scrimmage:

On this play against Florida State, it appears that the center is assigned to come across the line and pick up Owusu-Koramoah, but the poor guy never stood a chance. Owusu-Koramoah sees the handoff and flashes through the hole to bring down the ball-carrier for a huge loss:

The way Owusu-Koramoah operates in space is truly special, and that translates to the passing game as well. Notre Dame regularly lined him up over tight ends and slot receivers, and he made a ton of plays on the ball, whether it was defending the field horizontally or running downfield on deep routes.

On this play, Koramoah is one-on-one with a slot. Though he bites a tiny bit on the out fake, he is fast enough to recover and catch up to the receiver 16 yards downfield.

And when the quarterback floats the pass up for grabs, Owusu-Koramoah is enough of a playmaker to get it and secure the interception:

Owusu-Koramoah is in single coverage against a slot receiver on this play, too. The route is different; instead of running deep, the receiver cuts inside and tries to get an angle, and with the way the defense is spread out, it should work against a normal linebacker.

But Owusu-Koramoah uses quick footwork to mirror the receiver, and when the pass arrives he has the ball skills to swat it down:

That’s an impressive play in a wide-open space, and this next one is an eye-opener as well.

Owusu-Koramoah lines up outside and comes crashing into the backfield unblocked at the snap. It appears to be a triple-option type play, and Owusu-Koramoah is not phased at all. First, he pinches inside to defend against the initial handoff action; when that is revealed to be a fake, he re-routes and squares up to protect against a quarterback keeper; and when the QB goes to the third option and pitches it outside, Owusu-Koramoah recovers and races outside, where he catches up to the runner and helps bring him down for a minimal gain:

That explosive athleticism has to be appealing to Las Vegas, which fielded a stationary, reactive defense last year.

And though he lacks prototypical size, Owusu-Koramoah packs a wallop. Watch him read this play and crack the running back dead in his tracks:

That is some serious stopping power.

Now, there were certainly instances when Owusu-Koramoah’s aggressiveness got the better of him. He is prone to shooting gaps at the expense of maintaining his responsibilities, but that’s what he is: a big-play defender who makes things happen.

He just has a knack for it:

Will Owusu-Koramoa be the pick for Las Vegas?

The fact that five quarterbacks are projected to go in the top 15 helps the Raiders, because it might push an ultra-talented defensive prospect like Owusu-Koramoah right into their waiting arms at No. 17 overall.

Most mocks have had Owusu-Koramoah available in the middle of the first round, and he has been a popular projection for the Raiders.

As far as defensive prospects go, Owusu-Koramoah has to be near the top of the draft board for any team.