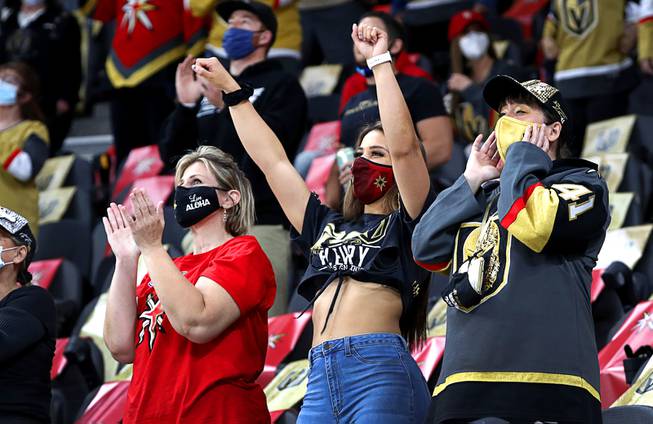 Vegas Golden Knights fans cheer a goal by Golden Knights center Jonathan Marchessault during the first period of a game against the San Jose Sharks at T-Mobile Arena Wednesday, April 21, 2021.

The arena now is capped at 20% capacity because of COVID-19 restrictions.

The team has submitted a plan to the Clark County Commission, which starting Saturday takes over local control of COVID-19 restrictions from the Governor’s Office.

“Our competitive advantage throughout the league are our fans,” Foley said. “Our fans are rabid; they support the team; they’re all-in and our team is all-in with the fans.”

Foley said he hopes to see arena capacity at 80% or even 100% by the time playoffs begin in May. The Golden Knights have clinched a playoff berth and are guaranteed at least two home games per round.

A Clark County spokesman said the commission has received the proposal, but it has not yet been approved.

The Golden Knights went the first two months of the regular season without fans at T-Mobile Arena because of state restrictions on large gatherings.

Fans returned March 1 at 15% capacity, which was expanded to 20% later in the month. Vegas has been capped at 3,950 spectators since March 29.

Expanding to 50% would allow about 9,000 fans at games against the St. Louis Blues on May 7 and 8, as well as at the regular season home finale May 10 against the Avalanche.

T-Mobile has a reputation as one of the loudest arena’s in the league, and the Golden Knights missed the opportunity to play at home last season. The Stanley Cup Playoffs last season were played in two hub cities in Canada to reduce exposure to the virus. Vegas played all its games in Edmonton without fans.

Golden Knights coach Pete DeBoer has yet to stand behind the bench during a home playoff game for Vegas. But the former Sharks coach knows what T-Mobile Arena can be like.

“I can tell you it’s intimidating,” he said. “From the opposing bench, it’s a nightmare.”