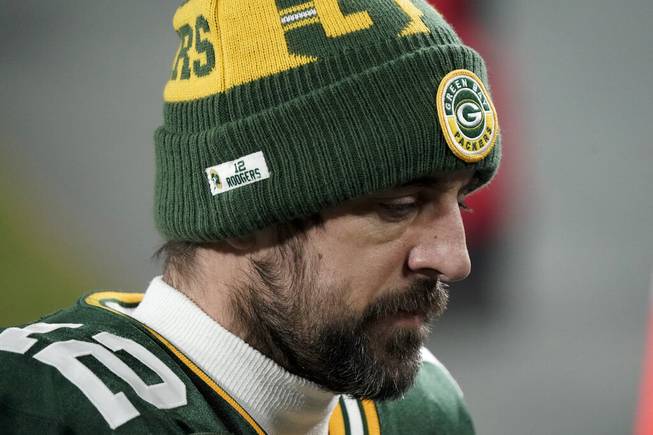 Green Bay Packers quarterback Aaron Rodgers (12) walks off the field after the NFC championship NFL football game against the Tampa Bay Buccaneers in Green Bay, Wis., Sunday, Jan. 24, 2021. The Buccaneers defeated the Packers 31-26 to advance to the Super Bowl.

As if they weren’t busy enough with preparations for the first round of the NFL Draft, the Raiders’ war room no doubt jumped into overdrive on Thursday afternoon as reports surfaced that Las Vegas could be on Aaron Rodgers’s short list for trade destinations.

Rodgers, the reigning league MVP after passing for 4,299 yards and 48 touchdowns in 2020, is on the outs with the Packers and has reportedly told the team he doesn’t want to return to Green Bay for the 2021 season.

According to Pro Football Talk, the Raiders are among three preferred destinations for Rodgers, along with the Denver Broncos and San Francisco 49ers.

Rodgers has been named MVP three times during his Hall of Fame-caliber career and quarterbacked Green Bay to a Super Bowl championship following the 2010 season. He is heading into his age-38 season, however, and the Packers were cognizant enough of his age to select his replacement, former Utah State star Jordan Love, with a first-round pick in last year’s draft.

The Raiders have one of the league’s longest-tenured starting quarterbacks in Derek Carr, who is heading into his eighth season at the helm of the silver and black. Only Matt Ryan (Atlanta Falcons), Russell Wilson (Seattle Seahawks), Ben Roethlisberger (Pittsburgh Steelers) and Rodgers have been starting for their teams longer.

Carr performed well for Las Vegas in 2020, completing 67.3% of his passes for 4,103 yards with 27 touchdowns and nine interceptions, but Rodgers would obviously represent a massive upgrade at the game’s most important position.

Carr is set to count $22.1 million against the cap in 2021, but the Raiders have some flexibility with his contract should they choose to pursue Rodgers. The team could save $19.6 million on Carr’s contract by trading him, incurring a dead-cap hit of just $2.5 million.

It is unknown what the Packers would want in return for their franchise quarterback, but it stands to reason the cost would be heavy. Green Bay reportedly turned down the 49ers’ offer of the No. 3 overall pick in this year’s draft; the Raiders own the No. 17 pick this year.

When Raiders general manager Mike Mayock was asked after the season about the possibility of attempting to upgrade at the quarterback position, he said the team is happy with Carr but that there is a professional responsibility to investigate other options.

“Obviously, I can’t talk about anyone else’s players, so I won’t,” Mayock said. “I’ll just talk about Derek and I’m going to tell you the same thing I’ve told you guys the last couple years, which is I think Derek Carr had his best year yet under Jon Gruden. I think he’s one of the top quarterbacks in the NFL and we couldn’t be happier with him, and I tell you every year, we evaluate every position, every year. I have no idea who might call me or who might not call me, so you have to do the evaluations both on your own players and every other player in the league and you got to stack your boards and understand what league value is all around the league, and we do that.”