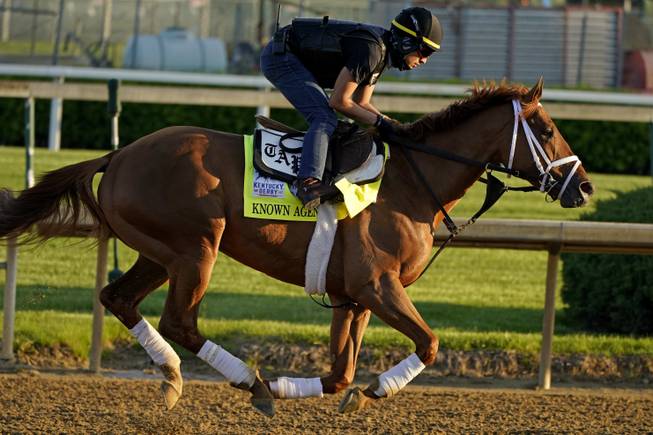 Kentucky Derby hopeful Known Agenda works out at Churchill Downs Tuesday, April 27, 2021, in Louisville, Ky. The 147th running of the Kentucky Derby is scheduled for Saturday, May 1.

The best jockey in the world is atop one of racing’s hottest horses from the stable of the best trainer in the game.

How is the Todd Pletcher-trained, Irad Ortiz Jr.-riding Known Agenda not considered at least the second favorite in this afternoon’s 147th running of the Kentucky Derby at Churchill Downs? The high-pedigree, Curlin-sired horse isn’t even close at some shops in Las Vegas, including Station Sports where he’s tied for the fourth lowest odds — behind Essential Quality, Hot Rod Charlie and Rock Your World and tied with Highly Motivated — at 8-to-1.

The biggest reason for the market’s disrespect for Known Agenda is his post draw. He got the dreaded No. 1 slot, the recurring narrative suggesting horses trapped on the inside can’t win the Derby has proliferated.

But here’s the thing — Known Agenda may not be trapped at all. He caught a break with the four horses drawn to next to him, as they’re some of the slowest in the field at least early, meaning Ortiz Jr. could direct him to safety directly out of the gate.

The Derby starting gate has also changed as an auxiliary unit used to be hauled in but now all 20 horses are in the same structure — allowing more room along the rail for the No. 1. A horse hasn’t won out of No. 1 since 1986, but a 35-year drought for a race that contains 20 horses isn’t all that statistically significant to begin with.

If we’re just cherry-picking trends, why not use the one that’s seen a Florida Derby winner go on to win the Kentucky Derby three times in the last eight years and eight times since 2001? There’s real correlation there, and Known Agenda prevailed in this year’s stakes race at Gulfstream Park in March.

So lock in Known Agenda at 8-to-1 at Station Sports as one of my three to-win picks for the 2021 Kentucky Derby. I’ll also head to Circa Sports and grab a couple of long shots — Mandoloun at 20-to-1 and Sainthood at 80-to-1.

I’m hoping I can extend my hot streak into one of the biggest betting weekends of the year after going 5-0 in last week’s weekend wagers. Let’s go to six more wagers across six different sports below.

I feel like I’m constantly fading Watson in this space, but there aren’t many golfers I find as consistently overpriced as the 42-year-old, two-time winner of the Masters. He’s on good form, I’ll give him that, but an uptick in performance for a few weeks isn’t enough to convince me that he’s anywhere near his best. I trust Howell more at this point of their careers, especially at a course like Innisbrook’s Copperhead with wide fairways that’s suited to his game. This isn’t a huge edge, but I’d make Howell a slight favorite in this matchup, and without much else sticking out on the board, he’s a take at the plus price.

All the matchup betting options are the best part of being in Las Vegas for Derby Day, so let’s go with one more wager involving horses not already discussed. I’m going all-in with the Pletcher-Ortiz connection as Dynamic One is a stablemate with Known Agenda and being ridden by Jose Ortiz, Irad’s younger brother. He nearly won the Wood Memorial and appears to have more upside than Midnight Bourbon, who’s most likely to stay in the pack and finish somewhere in the middle. Dynamic One isn’t quite Known Agenda, but racing out of the No. 11 post, there’s a strong chance he at least hits the ticket.

This may seem like a high price to pay, but it should be even higher considering the pitching mismatch. Cincinnati’s Luis Castillo and Chicago’s Zach Davies are not in the same class. The latter has gotten shelled in almost every start this season, struggling to get strikeouts and allowing sky-high hard hit percentages. Castillo hasn’t been great but his problems seem more correctable if not fluky. The Reds’ lineup has also far outperformed the Cubs’ this season. This should close up to 20 cents higher, so get in early and back the favorite at a reasonable price while possible.

These two teams are locked into a battle for the Central Division’s fourth and final playoff spot, but one has been far more efficient than the other on the season. As someone still sweating out an under season-long points bets on Dallas, it pains me to say it’s the Stars. Dallas has been banged-up all year — potentially and surely partly a result of starting this season shortly after a Stanley Cup Final run in the bubble last year — but is relatively healthy for  this final stretch of six games. The Stars have the better goal differential — +8 to -5 – over the Predators and expected-goals percentage at 5-on-5 —53.2% to 49.1%. Dallas has the tougher remaining schedule so currently-leading Nashville could still snag the playoff spot, but the gap should close a bit today.

Light heavyweight fighter Dominick Reyes celebrates after knocking down Ovince Saint Preux at the end of the third round during UFC 229 at T-Mobile Arena Saturday, Oct. 6, 2018. Reyes won by unanimous decision.

Reyes is on the most forgivable two-fight losing streak imaginable, having lost fights to Jon Jones and Jan Blachowicz, a pair of UFC light heavyweight champions. Some even still believe he deserved the decision win over Jones. After that fight a year ago, Reyes would have been a decent-sized favorite over Prochazka. It doesn’t make sense to see him as the underdog now. Prochazka hasn’t lost in nearly five years but hasn’t faced anywhere near the competition of Reyes while fighting in Japan’s Rizin promotion. The Czech kickboxer is riding a streak of nine straight knockouts, but despite his stoppage loss to Blachowicz, Reyes has been able to take big strikes throughout his career. If the former top contender survives the early rounds, he should pull away from Prochazka.

I’m going from successfully buying low on one driver last week to doing the same with another this week but fading the one I initially backed. After having the best car most of last season, Harvick is struggling this year. But if there’s anything that can bring him back, it’s a date at the type of 550-horsepower, 1.5-mile tracks that he’s dominated throughout his career. Harvick has three wins at Kansas Speedway and finished in the top five in both of the races here last year. He’s much better in this package than Kyle Busch, whom I targeted last week at a superspeedway.  This line would make more sense with Harvick as the favorite as I can’t get Kyle Busch anywhere near the -135 price he’s currently laying in the matchup.