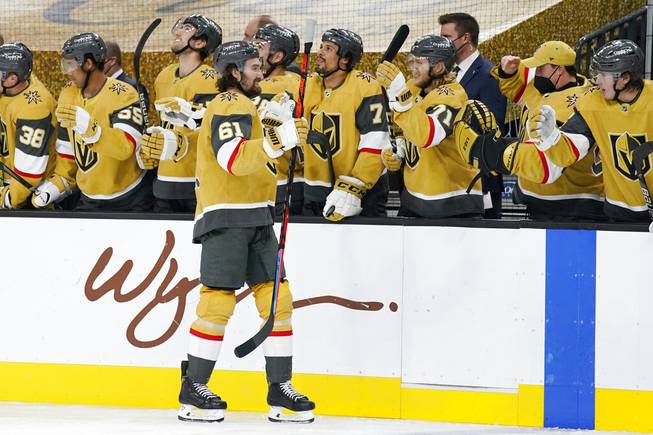 The Golden Knights were in their worst slide of the year, having lost four of five games from late March through early April, and Mark Stone was in a slump of his own. A tremendous season by the Golden Knights’ best player and team captain was trending down for the first time, as Stone had no goals and just four assists in his past 10 games.

After a 3-1 loss to the St. Louis Blues on April 7, Stone shouldered responsibility, stating publicly that players like him who are getting paid to score goals need to do so. And a team turnaround immediately followed.

Vegas emerged victorious in its next 10 games—a franchise-record winning streak—with Stone totaling seven goals and 15 points during that stretch. Weeks later, Stone remembers that shift and what part he might have played in it.

“I actually think in that St. Louis game, [top goal-scorer Max Pacioretty] and our entire group up front had tons of chances, but when you get those chances, you have to score,” Stone says. “That was kind of my message—when you get your chance, you have to score. At that time we were getting lots of looks, we just weren’t putting them in the net. That’s part of a mentality.”

It’s that kind of talk that makes Stone so respected in the locker room and has helped the initial year of his captaincy run smoothly. When the Golden Knights named Stone the first captain in franchise history before the season, this is exactly what they envisioned.

Stone, who turned 29 on May 13, is the emotional face of the team on the ice and its introspective voice in public. And he has managed to be all of that while turning in the best season of his career. Now, as the Golden Knights ready for their fourth playoff run—and Stone’s third since joining the team during the 2018-2019 season—they have an answer to the question many in Vegas have wondered for years: Who would be the first Golden Knight to touch the Stanley Cup if they win it?

By NHL tradition, the captain of the Cup-winning team accepts the trophy from the commissioner, celebrates and begins passing it to teammates. Stone is aware of that, though he jokes that it’s not exactly at the top of his mind.

“I think I probably thought more about that when I was 6 years old than I do now,” Stone says with a chuckle. “It’s so cliché, but you have to stay in the moment. You can’t take anything for granted.”

Don’t get him wrong, Stone badly wants to win the Cup. He talks about it more publicly than any other Golden Knight. But he’s also grounded in reality. He knows that even though Vegas is among this year’s Stanley Cup favorites, there are no guarantees.

Still, the Golden Knights’ chances could actually be better not only because of Stone’s leadership, but simply for him having the “C” on his jersey. Since 1972, no team has won the Stanley Cup without a captain. It’s rare for teams even to advance to the final without one, with the 2018 Golden Knights one of a few to do it.

But Vegas has one this year, a player admired throughout the entire organization, all the way to the top.

“Mark Stone, he’s my hero,” Golden Knights owner Bill Foley says. “He’s the perfect captain. He’s understated. He’s a leader. He works day and night to improve himself and improve his game. He leads by example, and he’s got the respect of the entire team. He’s just a quiet, gentle force in our locker room. I can’t say enough good things about Mark.”

After going three years without a captain, why did the Golden Knights decide this was the right season to name one? Foley says Stone made it obvious.

The owner is such a big fan of Stone, when Foley got a new yellow Labrador retriever, he considered naming him Stonewall so the pup could share the captain’s nickname of Stoney. Foley says he told Stone about the possibility at a shared lunch and got a kick out of the player’s reaction.

“He looked at me said, ‘Well, that would be an honor,’” Foley recalls. “I thought that was pretty funny.”

Foley ended up naming the dog McArthur, but maybe he would have stuck with Stonewall had he seen the season Stone is turning in first. If not for the pandemic-shortened campaign, Stone likely would have shattered his career-highs in goals and points.

He did so on a per-game basis to anchor one of the league’s premier teams, and his impact has come across just as strongly in other areas. Stone has the respect throughout the entire locker room, from young players trying to establish themselves to longtime veterans.

Second-year forward Nicolas Roy recently joked that he wished he could be more like the captain when asked about a Stone-like play. And Stanley Cup-winning defenseman Alex Pietrangelo, who signed with the Golden Knights last offseason after serving as captain for the St. Louis Blues for four years and helping that team to the 2019 Stanley Cup, says he didn’t mind shedding his captaincy to come to a team led by Stone.

“Statistically, it speaks for itself, but the things throughout a game that he does show that he cares, show that every night he’s going to put what he can out there and that’s what you want in your leader,” Pietrangelo says. “You want someone to follow, and when you have a guy playing like that, it’s easy to follow.”

It’s not just new teammates who are impressed by Stone. Like Pietrangelo, forward Max Pacioretty is a former captain, having worn the “C” for three years in Montreal before 2018 brought him to Vegas. His tenure here predated Stone’s by five months, and they’ve been linemates since Stone came over from Ottawa in 2019.

Unlike Pietrangelo, Pacioretty knew Stone as a teammate before he became captain. Pacioretty says captaincy or not, Stone remains the same player.

“I think he hasn’t changed his demeanor or personality or character at all, and to me that’s the sign of a true leader,” Pacioretty says. “He’s not talking just to talk. If there’s something that needs to be said, he has our full attention.”

Stone’s first season as captain has gone so well, it could end with his first individual award in the NHL. The past two seasons, he has finished in the top five in the voting for the Selke Trophy, awarded to the forward who has played the best on the defensive end—and he’s considered a favorite again this year.

It’s a trophy befitting a captain, going to players who care about the less flashy elements of the game, while putting up enough scoring to merit attention. Four of the past five winners currently serve as captains for their respective teams.

It would be an honor for Stone, but like a true leader, he deflects discussions of personal honors. That’s not the trophy he’s after. “The only thing that’s going to change my life is to call myself a Stanley Cup champion,” Stone says. “That’s the only thing that if I don’t get a chance to win, I’ll regret.”