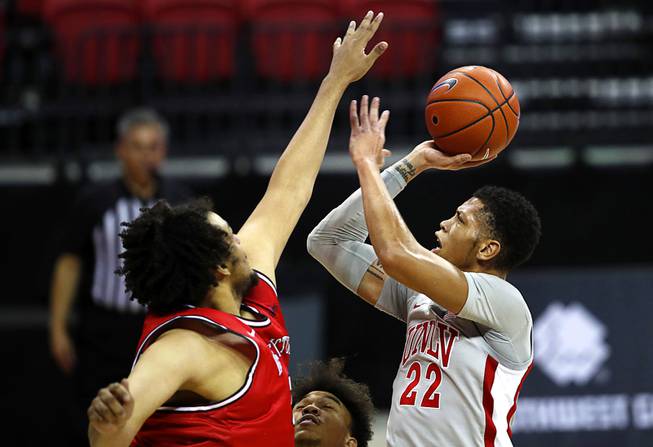 The rebuilding process being undertaken by the UNLV basketball program took an unexpected turn on Tuesday, as the team announced Nick Blake will be transferring.

Head coach Kevin Kruger was quoted in a team-issued statement portraying the decision as mutual.

“We appreciate all that Nick has contributed to our program and we wish him the best in the future,” Kruger said.

Blake started 10 of a possible 27 games as a freshman last season and appeared to be one of the scarlet and gray’s few legitimate building blocks, as he averaged 6.5 points, 2.8 rebounds and 2.7 assists per game.

A 6-foot-6 wing player, Blake was a 3-star recruit and the prep headliner among UNLV’s 2020 recruiting class.

With Blake’s surprising departure, UNLV will now be replacing 11 players from last year’s roster, which may be a good thing since the 2020-21 squad underachieved with an overall record of 12-15 (8-10 in Mountain West play). The only two returning players as of now will be junior guard Marvin Coleman and freshman forward Reece Brown; Coleman and Brown combined to average 8.3 points per game last year.