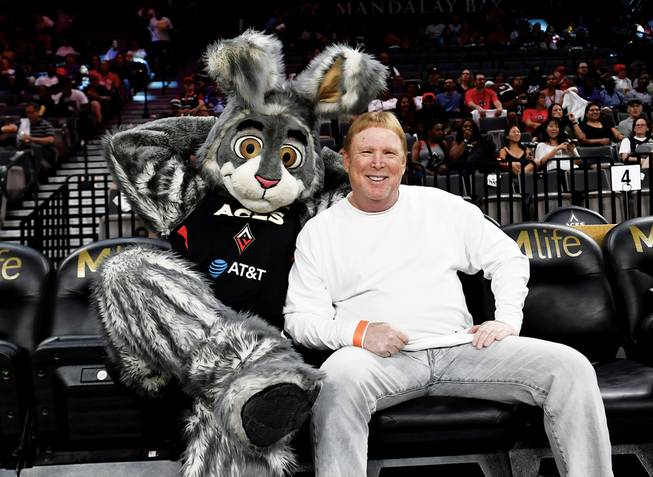 Mark Davis is joined by Buckets, the Las Vegas Aces mascot, at a game in 2019.

From a relocation and rebranding of the San Antonio Stars to a renovation of Michelob Ultra Arena, MGM Resorts poured a lot of resources into the Las Vegas Aces during its three-season span as ownership group.

That strong financial commitment likely won’t change with Raiders owner Mark Davis stepping in. He went from Aces season-ticket-holding superfan to owner earlier this year, purchasing the franchise from MGM.

At a news conference announcing his purchase in February, Davis stressed that he viewed the acquisition as an opportunity to take the Aces to another level. Examples of his vision are already evident.

The Aces’ days renting practice and locker room space at UNLV are numbered, as Davis has broken ground on an all-encompassing team headquarters in Henderson alongside the Raiders’ own space off St. Rose Parkway. Las Vegas will continue to play at the former Mandalay Bay Events Center for the time being, but everything from the practice courts to the team offices will be located next to the Raiders.

Four days before the team’s season-opener—May 15 at the Seattle Storm—Davis announced former LSU women’s basketball coach Nikki Fargas as the team’s new president. Davis has known Fargas, who stepped down after a decade coaching the Tigers to join the Aces, for nearly 20 years. Her husband, Justin Fargas, was a Raiders running back from 2003-2009.

Bill Laimbeer previously served as both the team’s coach and president but will be focusing exclusively on the former position this season. Having a highly respected talent evaluator like Fargas to deal with personnel matters could pay dividends and help the Aces reach an organizational goal of becoming a perennial championship contender.

But Davis has even higher aims. He’s been an outspoken supporter of women’s basketball for years, a passion he says hearkens back to his father Al Davis’ fandom and relationship with famed University of Connecticut women’s coach Geno Auriemma.

More than just the Aces, Mark Davis has pledged a commitment to growing the game as a whole and says increasing player salaries should be a route to do so. The WNBA is headed in an upward direction with the minimum salary growing from $41,000 three years ago, when the Aces moved to Las Vegas, to $58,000 this season, according to spotrac.com. But there’s still a long way to go.

Davis wants to help bridge the gap, and he’s committed to doing it in Las Vegas. The Aces are here to stay.