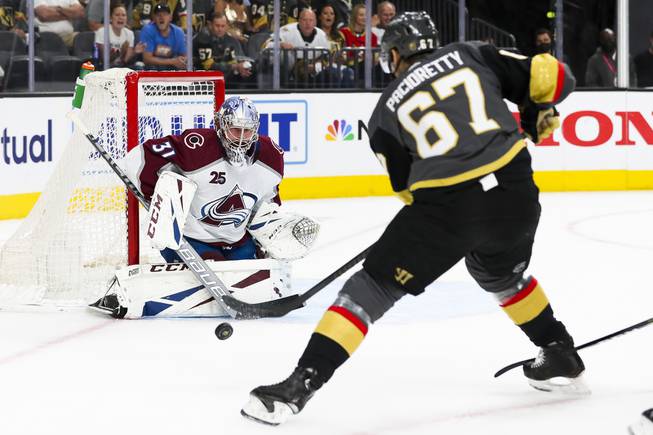 Connecting with what looked like it could have been a knockout punch would have been purely unintentional, of course, but also appropriate in a way. The Avalanche’s goalie has done more than enough to frustrate most opponents with the way he’s played through the first three games of his team’s second-round Stanley Cup Playoff series.

Just not the Golden Knights.

Vegas took all of Grubauer’s, and his posts’, stops in stride over the last two games, not to mention Colorado also seemingly getting everything else to fall its way. The Golden Knights could have “folded the tents,” in captain Mark Stone’s words, when staring at a one-goal deficit and potential 3-0 series hole late in Game 3 on Friday.

Instead, they stayed levelheaded, kept attacking and changed their fortune with a two-goals-in-45-seconds third-period stretch for the ages to win 3-2 and cut the Avalanche’ series lead down to 2-1.

“Perseverance,” Vegas coach Pete DeBoer cited as the reason for Friday night’s victory. “We just stuck with it and kept our belief in our game.”

That may come off as simple or straight out of Team Sports for Dummies. But it’s not.

Not when it comes to this particular set of circumstances. Encountering a hot goalie and ending up on the wrong side of puck luck is entrenched as a part of hockey, but it must be demoralizing when it’s a historically efficient team, President’s Trophy-winning team catching all the additional breaks.

It’s not like Colorado needs the extra help. By any metric beyond goals, Vegas had spent the last six periods of the series as the superior team but had little to show for it as Game 3 wound down.

Somehow that didn’t bother them.

“We have a lot of hockey to play,” forward Jonathan Marchessault said. “I think last game we played a great game and should have had a better outcome. Tonight, we stuck with it. Obviously we’re down 2-1, but tonight, we were the better team.”

After the Golden Knights manufactured a first period full of prime opportunities but saw Grubauer turn them all away, Marchessault gave the traditional radio interview during intermission. He stressed that the Golden Knights couldn’t be taken out of their game and needed to stay positive.

It’s easier said than done, but Marchessault did both.

He lived up to his words as his line, with Reilly Smith and William Karlsson, was the one to drive the Golden Knights by generating constant chances in the final two periods. They were rewarded too as the first goal of the game came when Karlsson poked in a putback past Grubauer.

Then, with Vegas trailing 2-1 with six minutes to play, Marchessault scored in a fashion that would end up looking like a microcosm of the Golden Knights’ night. Grubauer blocked his initial shot, but Marchessault kept at it and got to the rebound behind the net where he fired the puck in off of the goaltender’s back.

“That goal obviously gave us the energy to finish it off,” Pacioretty said. “Going down 3-0, that’s really hard, so that goal was huge.”

When Pacioretty deflected a shot from Nick Holden less than a minute later, he said he knew it was going in even before it found the net. Marchessault’s spark provided such confidence, according to Pacioretty.

Make that a mixture of Marchessault’s spark and the largest home crowd in 15 months. The advantage of having a capacity crowd of 17,504 fans for the first time since the pandemic wasn’t lost on the Golden Knights.

“We’ve talked about so often how they’ve helped us take over a game,” Pacioretty said. “They’ve stayed positive with us right to the very end and once we’re able to break through we use that momentum they are able to give us … This is  the best place to play and — especially in the playoffs — it’s pretty fun.”

There’s still a lot more work to do. Mental toughness has its limits. It can only take a team so far against an opponent like Colorado, which is rightfully still considered a big favorite to ultimately advance in the playoffs.

The Golden Knights aren’t going to beat themselves because they refuse to get down on themselves.

“That’s what I like about this team, we never give up,” Karlsson said. “We try to contain the emotion.”