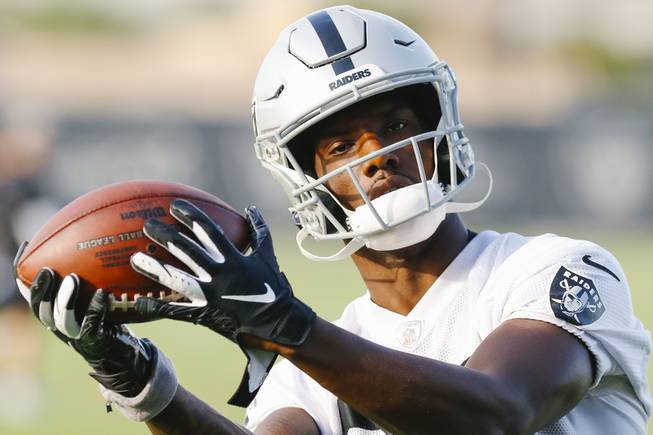 Derek Carr on Wednesday compared his relationship and rhythm with one Raiders’ receiver to the bond he famously built with Davante Adams while in college at Fresno State, and it wasn’t the teammate most would expect.

Pro-Bowl tight end Darren Waller has been the team’s leading receiver in both catches and yards in each of the last two years, but Carr believes he’s developing a similarly lethal rapport with second-year wideout Bryan Edwards. With Waller missing his second straight training camp practice for undisclosed reasons, Edwards may have emerged as Carr’s go-to guy.

“It’s very fun to throw him the ball,” Carr said. “I’ve said it before, just like Davante could move through the air, their body control is just impressive.”

Edwards caught a pair of deep passes from Carr during the live, 11-on-11 portion at the end of Wednesday’s training camp practice. The first, he went up in the air and snagged near the middle of the field, and the second, he cradled despite smothering coverage from cornerback Keisean Nixon.

“He would’ve had another big catch and run up the sideline if the DB didn’t hold him,” Carr said with a smirk. “Those guys cheat sometimes.”

Edwards’ 2020 NFL Draft classmate, Henry Ruggs, might have been the standout of Tuesday’s practice but he stole the show himself offensively on Wednesday. The apparent progression of both players is a major development for the Raiders as they look for complements next to Waller going into the season after the offseason departure of Nelson Agholor.

Their consecutive big days are exactly what coach Jon Gruden hoped for when he gave them a message to maximize their looks with Waller off the field.

“He told me I was going to get more opportunities with Waller down for a little bit and try to make the most of it,” Edwards said.

Gruden described Waller’s Tuesday absence as nothing more than a day off, but the fourth-year Raider didn’t participate at all again on Wednesday. That might be a cause for concern for Raiders’ fans, though Waller was lifting weights inside while his teammates practiced on the outdoor fields to at least make it appear certain he hasn’t suffered a serious injury.

Las Vegas needs to figure out how to maintain a high-powered offense apart from Waller anyway. Even if the 6-foot-6, 255-pound 28-year-old plays in every game for the third straight season, opponent game plans will center on shutting him down more than ever before.

Edwards, at 6-foot-3 and 212 pounds, could be the beneficiary as he’s seen as the second-most physically imposing pass-catcher on the roster behind Waller.

“I’m trying to catch every pass that comes to me and make the most out of every opportunity,” Edwards said. “That’s all I can control.”

Edwards didn’t drop anything thrown in his direction on Wednesday, another positive sign for the Raiders. Drops were one of the only reasons the 22-year-old slipped to the third round of the draft out of South Carolina where he shattered career records of one of his idols, Alshon Jeffrey.

But Edwards has worked on that, and his catching ability has now reached a point to where Carr lists it as one of the receiver’s strengths.

“You see his strong hands,” Carr said. “Sometimes he’ll catch a ball and he’s so strong that he doesn’t bring it into the body where they can punch it out; he’ll just hold it away from them. Not many guys can do that, but he can.”

Injuries are the only other factor that have held Edwards back since he turned pro. He broke his foot while preparing for the draft combine in early 2020, but recovered in time for his rookie training camp where he won a starting job.

But then Edwards hurt his ankle in Week 3 against the Patriots, missed the next month and could never get back to full strength.

“I just had such high expectations for myself,” Edwards said. “I put that pressure on myself. I wanted to be a guy in this league and for this team, so when I got hurt and went down, it was real tough on me mentally and I tried to force myself a little bit early to come back. It just didn’t go the way I wanted it to go.”

Edwards could never unseat Agholor to get back into the starting lineup and finished his first NFL season with 11 catches for 193 yards. He scored his first and only NFL touchdown in a Week 17 win over the Broncos.

“It was definitely important for me to finish strong,” Edwards said. “That last impression going into the offseason boosted me into this year, so I’m looking to put my best foot forward.”

The Raiders need both Ruggs and Edwards to get better in their sophomore seasons, but the two are not in direct competition with each other for playing time. If all goes according to plan, they’ll be complementary parts of the offense.

Ruggs is the constant big-play threat because of his game-breaking speed and ability to create separation on deep routes. Edwards is the possession receiver who can run all the routes and outmuscle anyone for balls thrown in his vicinity.

Waller has been Carr’s primary, if not only, security-blanket receiver over the past couple seasons after Adams once held the role with the quarterback. Edwards could be the next in line.

“It reminds me a lot of Davante when he first came into college,” Carr said. “He was redshirting, but I wanted to throw him every pass. Even though we were getting ready for games, I’d still throw his rep. Just building that time on task. So, it was the same thing with Bryan when he wasn’t starting, I was still trying to throw his rep every day in practice. Now, I’m seeing that translate. He’s running with the (first-string) a lot as you guys can obviously tell. He’s making a lot of plays.”

Tate Martell is nonparticipant on first day of UNLV camp