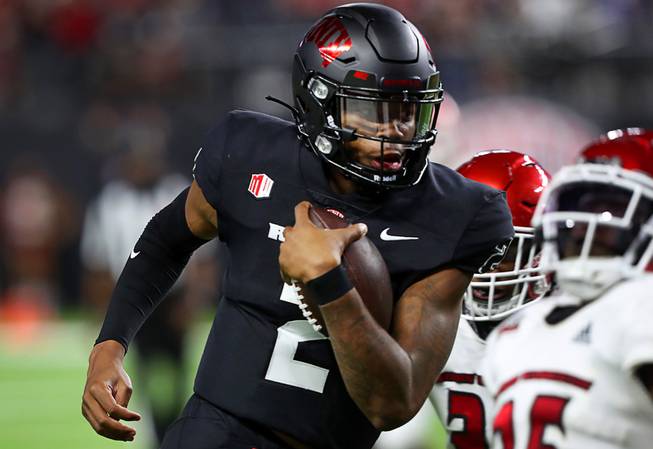 UNLV football coach Marcus Arroyo debated his starting quarterback situation all offseason, and the uncertainty lingered right up until game time on Thursday, when the scarlet and gray opened the season against Eastern Washington.

Arroyo isn’t going to make the same mistake twice. On Monday, he named Doug Brumfield the starter well ahead of this weekend’s game at No. 25 Arizona State.

“Doug will start at quarterback,” Arroyo said with no equivocation. “He did a fantastic job getting into the [Eastern Washington] game and sparking us.”

Whether or not it could be attributed to the indecision surrounding the sport’s most important position, UNLV’s offense came out in a daze against Eastern Washington and put up just six points in the first half. Starter Justin Rogers passed for just 21 yards and managed to produce only two field-goal drives in two-and-a-half quarters before Arroyo subbed in Brumfield; over the final quarter (and two overtime periods), Brumfield led UNLV to 27 points.

Brumfield, a 6-foot-5 lefthander from Inglewood, Calif., looked impressive in relief. He connected on 5-of-12 passes for 117 yards, and though he didn’t toss a touchdown pass he did rush for 43 yards and a score.

Brumfield’s numbers would have looked even better had UNLV receivers not dropped a handful of his throws, but even so he made Arroyo’s decision for Week 2 an easy one.

Arroyo thinks Brumfield may be more in tune with the offense after getting full No. 1 reps in practice this week.

“I’m excited to see him get in with a true week, going in as the guy for the first time,” Arroyo said.

Brumfield looked confident and decisive against Eastern Washington. His first completion was a perfectly placed 56-yard bomb to Kyle Williams, and he led UNLV back from a 20-6 deficit to tie the game 20-20 with a 2-point conversion pass to Courtney Reese with 8:03 remaining.

Brumfield had a chance to lead a game-winning drive when UNLV gained possession with 5:42 left. He drove UNLV to midfield, but a 3rd-and-6 pass deflected off a receiver’s hands and was intercepted.

Brumfield never got the ball again in regulation, but he bounced back in overtime by rushing for 37 yards and a touchdown. He completed a potential game-extending 2-point pass to Griffin, but the receiver did not break the plane of the goal line.

Despite the loss it was invaluable experience for Brumfield, who came into the game with just 21 career pass attempts.

Brumfield said his preparation allowed him to navigate the intensity of a close, back-and-forth affair.

“During the whole experience I just tried to think of it as one of our practices,” Brumfield said. “We work on situations like that every day in practice: 2-minute drills, 4-minute drills, critical situations. Throughout the whole game I just tried to keep that in my mind–it’s just a practice out here. It’s just a different jersey, that’s it. It kind of helped me stay calm in a situation being my first time out there.”

Arroyo said he doesn’t plan to substitute quarterbacks on Saturday and that Rogers will only play “if needed.”

UNLV will be best served if Brumfield can sustain a high level of play for 60 minutes. Arizona State is coming off a 41-14 beatdown of Southern Utah in which the Sun Devils held the opposing quarterbacks to 146 passing yards and 4.7 yards per attempt while intercepting three balls.