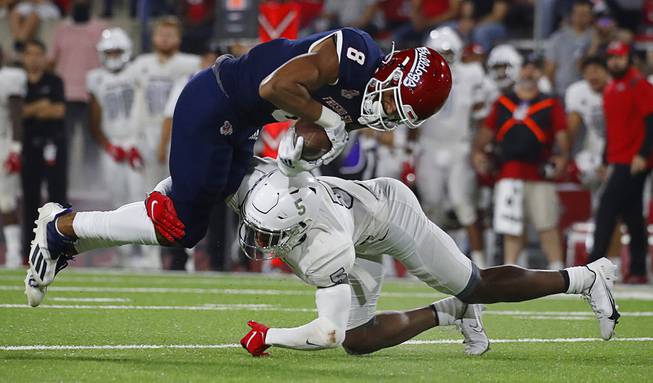 If UNLV continues to play like it did Friday night, it will win a football game this season.

That’s probably the biggest takeaway from the scarlet and gray’s ultimately disappointing 38-30 loss at No. 22 Fresno State. Yes, the team is now 0-4 on the season and 0-10 in two years under head coach Marcus Arroyo, and yes, they coughed up a 21-9 lead in the process. But there was enough good stuff along the way to make one believe this team might be capable of playing credible football by the end of the season.

Doug Brumfield is a quality quarterback

It’s pretty obvious at this point—when Doug Brumfield is on the field, UNLV has a decent offense. The sophomore was excellent again against Fresno State, completing 6-of-13 passes for 143 yards and two touchdowns, and he carried the ball four times for 39 yards. The problem is, Brumfield hasn’t yet proven he’s capable of playing a full game.

Much like the Arizona State game two weeks ago, Brumfield gave the scarlet and gray two-plus quarters of good quarterbacking before injuries knocked him out. The first time Brumfield left the game was late in the first half, which Arroyo later attributed to full body cramps. Freshman Cameron Friel quarterbacked UNLV’s final drive of the half, which went nowhere.

Brumfield returned to start the third quarter, and the first play was a screen pass that Tyleek Collins took 80 yards for a touchdown. Following that triumphant return, however, Brumfield suffered a knee injury — possibly a reaggravation of his existing injury, Arroyo wasn’t immediately sure after the game — and exited for good.

At the time Brumfield left, UNLV led 21-9. Friel did manage to lead two scoring drives from that point on, but the offense just wasn’t the same. And when the game was on the line late in the fourth quarter, Fresno State’s defense completely overwhelmed the freshman, strip-sacking him on the second-to-last drive and forcing a turnover on downs on the final possession.

Arroyo commended Brumfield for practicing this week and attempting to play through the pain against Fresno State.

“Doug went out there and tried to compete as best he could,” Arroyo said.

Brumfield’s status for next week isn’t known yet, but it’s safe to say that he’ll need to play in order for UNLV to have any chance of winning at UTSA on Saturday.

After two lackluster showings against Arizona State and Iowa State, the running game clicked for most of the night against Fresno. Senior back Charles Williams had room to operate and chewed up large chunks of field, finishing with 102 yards and a touchdown on 19 carries.

Williams also made an impact in the screen game, catching three passes for 96 yards.

“Charles is our workhorse,” Arroyo said. “We have an offense that’s built around running the football downhill and he fits what we do. I said that when we first got here.”

If UNLV is going to continue riding the quarterback carousel, a solid run game is going to be key over the final eight games. Against Fresno State, they may have turned a corner.

There is big-play ability

UNLV has struggled mightily to move the ball consistently since Arroyo took over, but against Fresno they were able to create chunk plays with regularity.

Brumfield kick-started UNLV’s first drive with a 37-yard run, setting up an eventual touchdown. The second drive, which also ended in a TD, was built around a 20-yard pass to Zyell Griffin.

UNLV also got 28- and 22-yard rushes from Williams, an 80-yard touchdown on a screen pass to Collins, a 50-yard screen pass from Friel to Williams and a 44-yard bomb from Friel to Steve Jenkins. That’s a lot of big plays.

Williams wants to see UNLV execute better on short fields, however, after a couple long drives ended in field goals instead of touchdowns.

“We did a good job of getting into the red zone and everything,” Williams said, “but we’ve got to execute and get more than three points. We’ve got to get seven. If you think about it, a couple times we got to the red zone, it changes the game.”

The defense can get stops

Fresno State came into the game sporting one of the nation’s most explosive passing offenses, averaging 378 yards per contest through the air (fourth in the country). And though Bulldogs quarterback Jake Haener eventually hit that number on the dot, completing 30-of-42 throws for 378 yards and five touchdowns, the UNLV defense did an admirable job of dampening the Fresno State passing game in the first half.

A lot of that can probably be attributed to the defense tiring over the course of the game. Though UNLV has some standout players on that side of the ball, depth is severely lacking. And it showed as Haener picked them apart over the final 30 minutes.

“I felt our guys were ready to fight,” linebacker Jacoby Windmon said. “You couldn’t ask for more fight. I liked what I saw. We’ve just got to learn how to make more plays, create more takeaways on that side of the ball and we’ll be successful.”

The fight is there

After playing two Top-25 teams the last two weeks (and losing by a combined score of 85-13), you might have expected UNLV to come into this game and lie down like a 30-point underdog is supposed to.

Instead, they threw a serious scare into a team that could end up winning the Mountain West.

“Proud of my guys,” Arroyo said. “Three back-to-back Top 25 teams. They fought. They’re working hard. They come back every week. They do what we ask. There’s no moral victories, they know that. We’re over that. We’re moving forward through that and I’m proud that they’ve got that mindset now.”

UNLV will probably be an underdog again next week at UTSA, but if things come together — if Brumfield plays four quarters, if Williams runs wild, if the defense can get a breather — this now has the look of a football team that has a chance of winning.