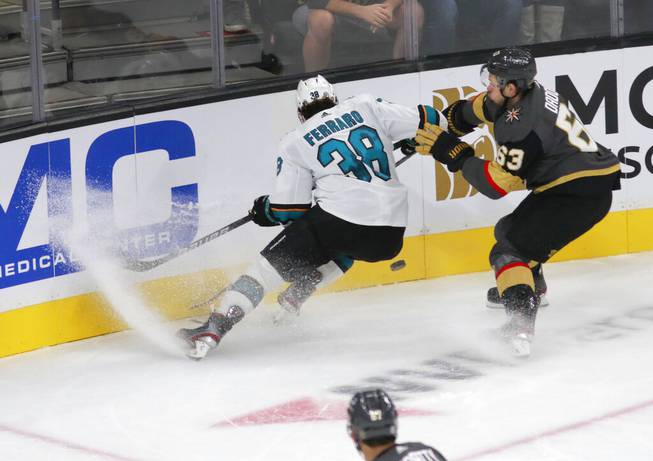 The beauty of the preseason is that even in defeat the Golden Knights can come away feeling good about one noticeable improvement in their game.

The Vegas power play connected on one of its three opportunities and looked dangerous every time out, which was far from the case last season when it failed to convert on all 15 power-play chances in a playoff series loss to Montreal.

Max Pacioretty scored, and Evgenii Dadonov and Nolan Patrick shined in their new roles as Vegas came away from its 4-2 loss to the San Jose Sharks at T-Mobile Arena with a sense of optimism.

“If we go 3-for-3 I’m not going to sit here and tell you it’s fixed, just like if we go 0-for-3 next game it’s not broken,” coach Pete DeBoer said. “I would ask that we look at this over the course of the year, evaluate this at the end of the year. We’re going to have ups and we’re going to have downs. I liked some of the pieces and the way that it looked, but we’ve got a long way to go and a lot to prove and we’ll see where it is at the end of the year.”

The best sequence on the power play didn’t even lead to a goal, but showed precisely why Vegas tweaked its roster in the offseason in the way it did.

In the second period, Vegas moved the puck around well before finding Dadonov in the middle of the ice. A touch pass from Patrick set up the sniper, who fired the puck off the post before the advantage ended without a goal.

The play was important because it showed a level of creativity the team lacked last season, particularly in the playoffs. Pacioretty and Mark Stone are terrific, and Vegas relied on their scoring prowess often, but Dadonov ripping a shot from the bumper on a play in which neither was involved provides another weapon.

Throw in Patrick, whose net-front presence led to Pacioretty’s third-period power-play goal, and the unit looked downright dangerous in large part due to the new players on the team.

“I thought we had some good looks, then got one there,” Patrick said. “I’ve played net-front quite a bit in my career so I’m pretty comfortable there. I thought we moved around pretty well tonight.”

A couple of rookies also took their first game action to impress.

“It’s tough to (play confidently) when you look up and you have Brent Burns coming down the ice at you, but I thought I did well,” Cotter said. “Obviously the goal made me a little happy so I wasn’t too scared to do stuff from there forward.”

The bad news was the injuries to some key players. Stone was struck in the ear by a puck early in the first period. He spent a moment on the ice in pain after signaling for a trainer, then left for the dressing room and did no return.

Shea Theodore did not take the ice for the third period, and Brayden McNabb left the game in the third.

DeBoer Stone got some stitches, but keeping him out the rest of the game was “precautionary.” He did not have an update on Theodore or McNabb.

For the players that remained, it was far from a perfect game, as you would expect from the first preseason contest of the year.

The Golden Knights looked disjointed, particularly early on as they struggled to connect with the crisp neutral-zone plays where Vegas often succeeds.

Twice, a defensive-zone turnover by one of Vegas’ best prospects led to a goal — one each by Peyton Krebs and Lukas Cormier.

There were bright spots in the game to be sure. Patrick and Dadonov looked at home, and goaltender Logan Thompson made some acrobatic saves in his first start as a Vegas goalie.

There are six more games before the regular season begins, and it sounds like DeBoer is looking for progressive improvements in the lead-up to Oct. 12.

“I think overall it looked like a first exhibition game, a bit of a slop-fest,” DeBoer said. “You have to take it for what it is. I think our hearts were in the right place. I think some guys were trying too hard, but we made some mistakes with the puck and some things you’ll obviously clean up as it goes on.”