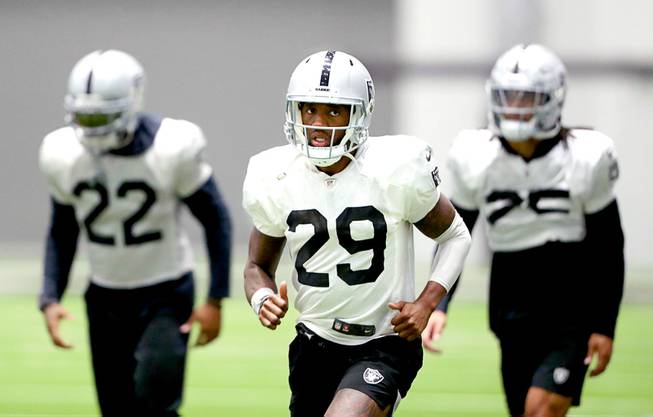 Coming off the worst year of his decorated NFL career, veteran cornerback Casey Hayward Jr. found himself in an unfamiliar position this offseason.

The Los Angeles Chargers had cut him, and some doubt existed around the league regarding how much the 32-year-old had left. Another team was sure to sign the former Charger captain and two-time Pro Bowler, but there were questions if he would still be a starter, let alone an impact player.

“I didn’t even know they said that,” Hayward said after the Raiders’ overtime win against the Dolphins on Sunday. “For the media, I don’t care what they say, good or bad. I just watch the film with my coaches and they’re going to tell me if I played good or not. It don’t matter if they say I’m washed or not.”

Hayward is only three games into his tenure with the Las Vegas Raiders, but he’s already shown more than enough to prove he’s decidedly not washed. He’s the third-highest rated cornerback in the league by Pro Football Focus’s player grades and didn’t give up a completion on his first 129 snaps on the field.

He’s been the Raiders’ most dependable defensive back during a start that’s seen them rank seventh in the NFL in giving up only 5.7 yards per pass attempt. Hayward’s continued emergence will be key going into a Week 4 road game against his former team, the Chargers.

“You get a little lucky sometimes and get some bad-thrown balls and be in the right spot,” Hayward said. “But I do like the way I’m playing right now. Hopefully I can continue to get better and better, work on some technique things.”

Connections to the Chargers don’t end with Hayward on the new-look Raiders’ defense. They abound all over the coaching staff and roster after Las Vegas hired former Los Angeles defensive coordinator Gus Bradley this offseason.

The Chargers let Bradley go after four years when new coach Brandon Staley took over and hired his own staff. Bradley’s next move was coming aboard with the Raiders where he brought over four of his Chargers’ assistants as well as eventually a total of four players in Hayward, linebacker Denzel Perryman, safety Roderic Teamer and defensive tackle Damion Square.

They’re all presenting a unified front going back to play the Chargers, saying there’s no animosity with the lone focus being on the Raiders starting their AFC West divisional schedule with a victory.

“You have a good feel for the personnel,” Bradley said of the Chargers. “But I always appreciate the time there, a lot of good people.”

The whole ex-Charger Raiders’ contingent got to spend one year in Los Angeles with quarterback Justin Herbert, who’s in some ways topped his 2020 Rookie of the Year campaign early in his sophomore season. Herbert has increased his yards per attempt, from 7.3 to 7.6, and completion percentage, from 66.6% to 69.8%, this year.

He’s the best pure passer the Raiders have seen this season, meaning he could present problems for Hayward and the rest of the defensive backfield. Bradley shared high praise on Herbert, whom he said he believed in “right from Day 1.”

That’s a level of gushing Bradley is unlikely to spill about his own players, at least during the season. And that’s not because he doesn’t believe in them; it’s because he wants them to stay hungry and keep improving.

Now in his fifth season with Bradley, Hayward has clearly taken the message to heart. He might stay even more unassuming than his coach.

He laughed off a question on whether the recent three-game stretch ranks among the best of his career and characterized it as “not even close.” The drive to improve is an attribute that’s lifted him ever since his rookie year in 2012 with the Green Bay Packers.

It’s an attitude Hayward wants to instill with the Raiders, one that may be even more important to how well he’s played on the field so far.

“We’ve got a lot of guys on this defense that listens, myself included,” Hayward said. “I don’t know everything. I tell the guys all the time if you see anything I need to correct let me know and I’ll do the same for them.”