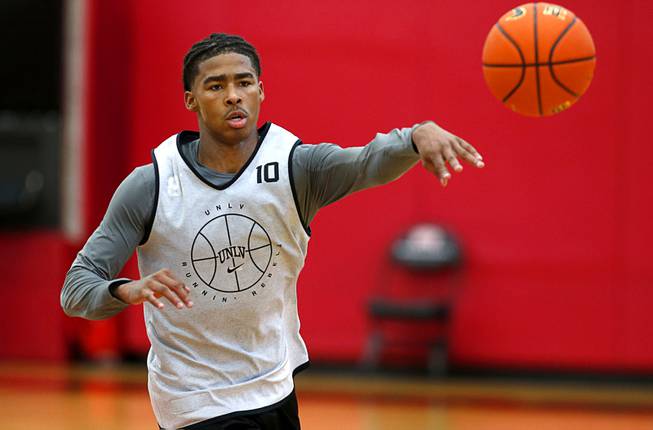 The UNLV basketball team is back with official practices ahead of the 2021-22 season. The Sun’s Mike Grimala and Ray Brewer give an early glimpse of how the program looks ahead of coach Kevin Kruger’s maiden season.

UNLV coach Kevin Kruger took great care over the offseason to build an experienced roster. He scoured the transfer portal for months and eventually brought in nine transfers, many of whom have logged years at power-conference programs.

This is a veteran squad.

So it was notable that one of the standouts of Wednesday’s practice was the lone freshman on the team, 18-year-old Keshon Gilbert.

Gilbert, a gangly, 6-foot-3 guard, mostly made his presence felt on the defensive end. In live 5-on-5 action he was tasked with defending the primary ballhandler the length of the court, and he executed it with aplomb.

That’s exactly what Kruger wants to see from his youngest baller.

“He’s our only teenager,” Kruger said. “Not only is he holding his own, but he’s taking a ‘swing away’ mentality.”

During one segment of practice, Gilbert came up with steals on consecutive possessions. Two plays later he swarmed an opponent who had picked up his dribble and forced an errant pass out of bounds.

Kruger and the rest of the coaching staff has taken notice.

“What has stuck out the most to us is when he’s guarding the ball, especially in the backcourt,” Kruger said. “He’s really disruptive but he’s never beat, so he doesn’t put his teammates at a disadvantage but he’s still able to apply a little bit of pressure. And as you can see defensively, in the halfcourt he really, really gets after it. He takes a lot of pride in that.”

Gilbert, a Las Vegas native, spent his senior year at Vashon High School in St. Louis, and his tenacious defense helped the Wolverines capture a state championship. In terms of development, his game is further along at that end of the floor.

While Gilbert works on his offensive arsenal, he’s more than happy to embrace a defensive-minded role at UNLV.

“I feel like my offense always comes from my defense, so if that’s how I’m going to get on the floor that’s what I’m going to do,” Gilbert said.

Playing time won’t be gifted to Gilbert, but Kruger believes the youngster is doing everything right to force his way onto the court.

Gilbert distilled his approach to defense in a few words.

“Just be a dog and work harder than my opponent,” he said.

In the new landscape of college athletics, strong NIL agreements are a must. And UNLV basketball got into the action on Tuesday, when it was announced that Findlay Toyota will offer each player $500 per month toward financing a vehicle.

Players will receive the monthly allowance for a year, and it doesn’t necessarily have to be used on a car—they are allowed to spend it on other expenses that aren’t covered by their scholarships.

Per NCAA rules, Kruger is not allowed to be involved in the brokering of any NIL deals, and he can’t comment specifically on them. “We love it and we’re happy,” is all Kruger could offer on the topic after Wednesday’s practice.

Senior Jordan McCabe said he doesn’t have any immediate plans to drive a car off the lot, instead earmarking the $500 toward a more sound investment.

“I have a vehicle,” McCabe said with a laugh. “That is an allotment you can use in a lot of different ways. I’m reading ‘Rich Dad, Poor Dad,’ and it’s telling me to put it in a little different place other than a depreciating asset.”